If you've come to inquire about Tettons, the short answer is that I they are a private endeavorment and I would appreciate if you did not use them. I am not yet prepared to share any details beyond what you see in my submissions.

I used to and sometimes still do block people who spam or don't tag their uploads properly in order to hide such content that slips through my filters, but it's been later brought up that they in turn cannot even view my submissions. If you find yourself blocked, please don't freak out thinking you've personally offended me - you may try one of my alternative outlets linked below.

I try to stream on Piczel most evenings CEST. 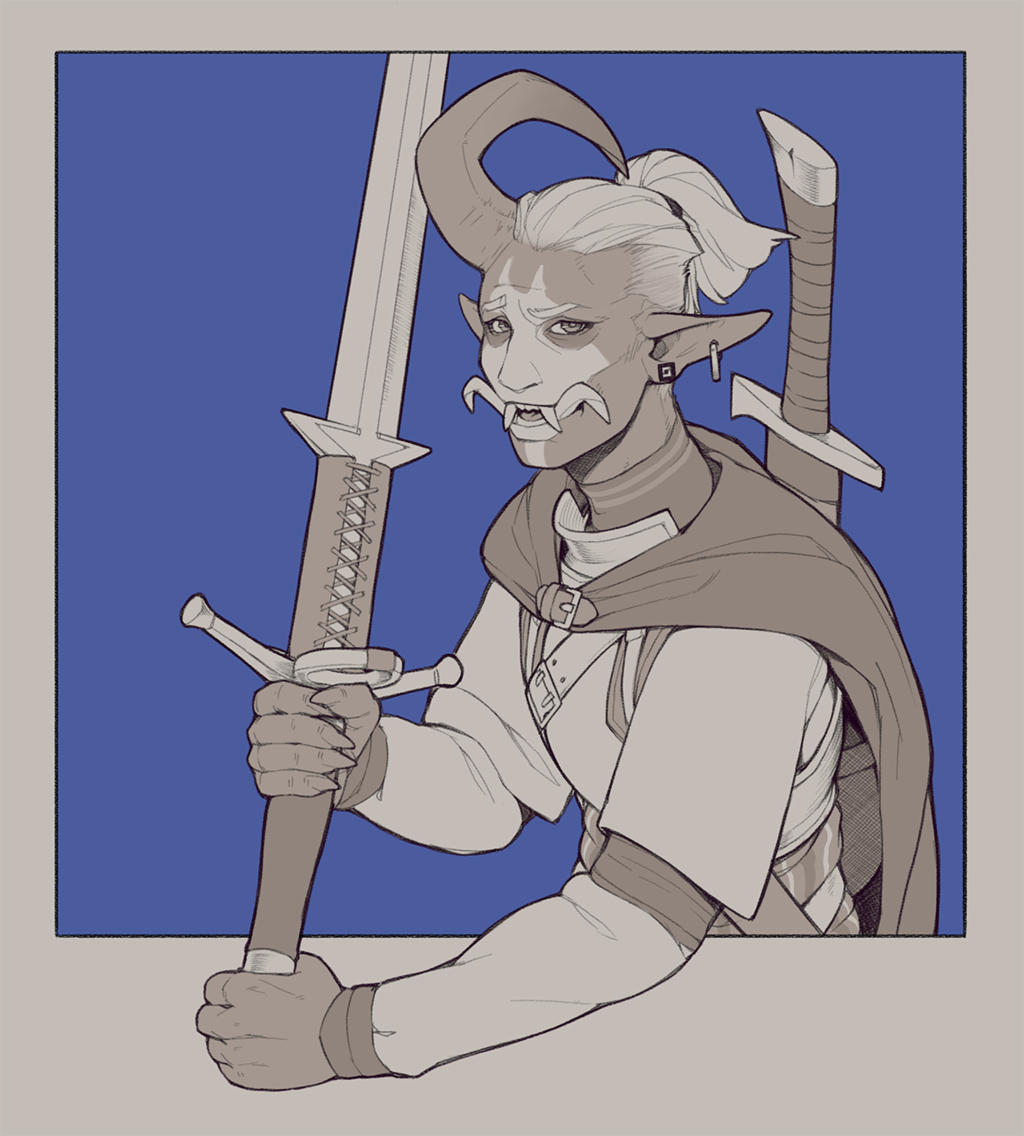 I'm finding it hard to get writing without prompts so I am going to open for Q&As regarding the "tetton universe". I've been meaning to do this for a while but since tumblr shat the bed I haven't been able to find an adequate alternative for online questions.

If you ask me anything about the world that tettons, kobolds, zeol etc. inhabit I will try to have an interesting answer.

Some pretext for you:
The universe is of grounded high fantasy. You may think of it as an upbeat power metal album or a comforting Ghibli adventure. "Current day" is an 1860s industrial age with magic, but you could just as well entertain a neolithic or post-scarcity age.
Being mageborn is extremely rare and significant. Societal customs vary greatly between species.
The planet--named Nihendall for the time being--is the third moon of a gas giant, and is divided into four quarters by titanic, intraversible ocean drains, and girdled by an outwards-facing ringworld, realms corresponding to the God-brothers Amhoran, Éodal, Phrygon, Szumuel, and their father Hemen, collectively known as Ur-Dynasts. Both structures are filled with spawling complexes of maintenance facilities, dungeons, and other miscellaneous mystical mechanics and their machine minders, having been created by the late Ur-Dynasts first some 240,000 years prior. Said Dynasts have not been around for roughly 58,000 years.
The human species has analogues for most ethnicities, excluding (for a lack of space) Central- and South-Asian, Pacific, and Russian folk (and the influence they might have had upon the others). Other twists include the Gaels dominating the Bretons, and the eastern lands of East-Asians and Amerindians being the most advanced industrial societies of humanity. They inhabit the Éodal Quarter along with a species of meter-tall Ratlings, classified either as squirrel- or mouse-like, as well as decimeter-tall gnomes.
Dwarves have Sibir-, Russian-, and Pittsburgh-like cultures. In an ancient era, a culture of the vaguely Sibiric nomad surface dwarves were collectively transformed into hulking yak-minotaurs in what was supposed to be a prank. These species share the Phrygon Quarter.
Tettons and kobold inhabit the Amhoran quarter, dominated by the continent named Korinth. Tettons have developed into the ethnic distinctions of Andoan, Deriten, Ortoran, Phéren, Thuranid, as well as a lesser isolate of Andoa; Taūman. The kobolds come in the primary color distinctions of: Red ("Volcanic"), Blue ("Cave"), Green ("Forest"), Tan ("Desert"), and Pink ("Hill"). Kobold have a complicated relationship with tettonkind.
The last quarter is Szumuel, which is largely oceanic. On it's surface lives a species of man-sized monkeys, progenitors to human and dwarves, who are a funky bunch. Their kinds follow the geographic distinctions of mountain, forest and islander until I can come up with nations. The ocean is inhabited by a species of sapient sea-slugs who come in a dizzying variety of colors and patterns.
Dragons used to be the supreme life-forms of the world, though they never built any civilisations of their own. They nearly went extinct during their revolt against the Dynasts and spent the Exodus Era attempting to transcend on the ringworld. Those oldest ones who succeeded are referred to as the Celestial Serpents, and the dragons now act as counselors to mortals, ever fearful of returning to tyranny.
The Zeol were created by the Ur-Dynast brethren to serve as their eternal subjects. They're the grey-skinned Implins who have no sense of shame as a result of millennia spent trying to repupulate their species in the wake of the Draconic Revolt, within their own refuge of Endless Shores, a pocket realm of eternal twilight and supposedly endless expansion into the ocean horizon. Unfortunately, the timeflow of this realm was temporarily sabotaged for the attempted Reconquest by the Betrayers and so they've not had quite the time they hoped they would. Ur-Hemen now resides in it's center, having bound his essence to rescue the realm, partly on a principle of penance.

View This Journal and 20 Comments

+75% of base price for each added character.
A very simple background is included in the base price.
I will gladly experiment with styles and settings.
I generally charge in USD, will also accept payment in EUR and SEK accounting for conversion rates.
Payments are taken through PayPal invoice.

Unless you see a journal (and status) stating otherwise, I am not available for work. Questions about if or when I think I'll open are generally ignored.

I typically choose the job(s) that sounds most interesting out of a batch of applications, or, if a YCH, the character that is most appealing or appropriate. I am less interested in fursonas than original designs. My gallery should give you a good idea of my interests.

I make sure to take input at every step of the drawing process and so may not make significant adjustments that should have been pointed out earlier, depending on how much work it entails, and will not make minor ones more than twice. I assume the right to cancel a commission and refund the buyer at any time, partially if significant progress has been made. Things I will not draw are sparklesonas, macro, hyper, inflation, hard vore, gore, non-con, preteen porn, diapers, soiling, transformation and other obscure obscene kinks. I am entirely fine with drawing mecha, complex mechanical components, weapons and equipment, but high detail will cost extra. I generally will not draw franchise characters (TV/film, games, original species) in manners that do not conform to their canon.