The Fern Sleep by Eskiworks 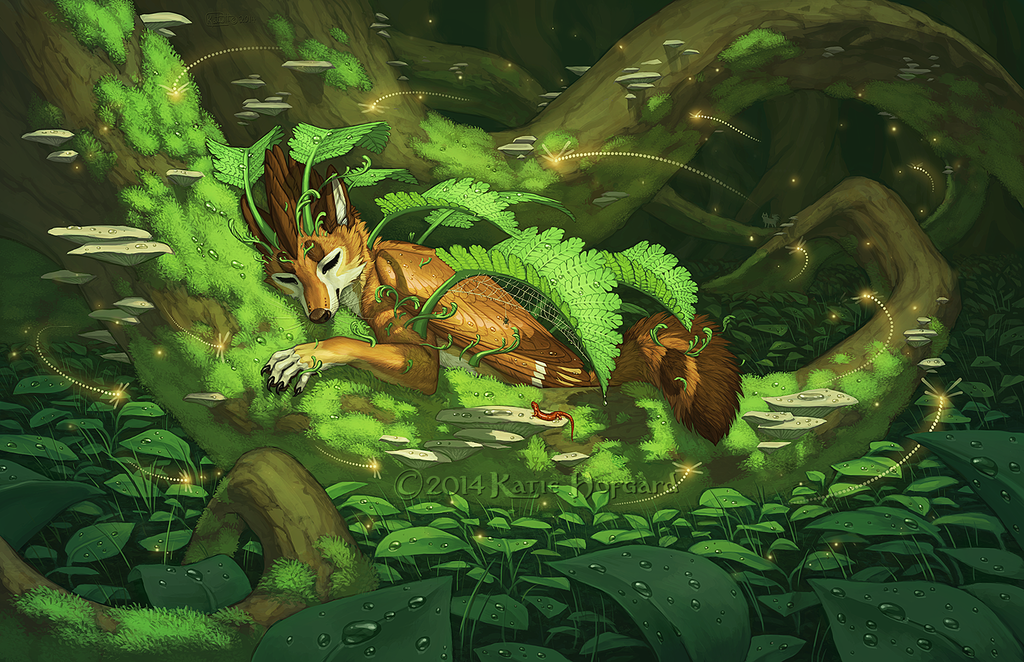 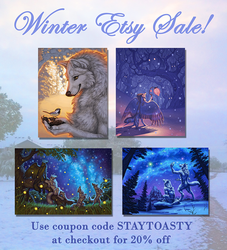 I was lucky enough to be commissioned for this piece by a wonderful patron, someone who has been there to support some of the bigger personal illustrations I've made in the past, RalenFox! Thanks to Ralen I was able to create this piece to show this moment in Nym's life, when everything changes for her. I was waiting to upload this piece so I could flesh out some details. Originally I was going to write more, but I decided on paring it down to a single page story vignette, keeping the details a bit more vague. This moment is the beginning of the story I've come to dub "TeaFeathers", the world for which I am continuing to build! You can read more about TeaFeathers in a tumblr I've set aside for the very purpose of world building - http://tea-feathers.tumblr.com/

"Nym knew death well, the sting of loss was familiar. Her last surviving grandparent passed on when she was a young kit, it was the first time she fully understood the empty space a loved one leaves behind. Not too many years after, a friend of hers died trying his first flight too early. His young wings unable to support him, he plummeted clumsily to the canyon floor to his end. She had also seen patients die in her mother's healing room on a few occasions; people she had seen around the village, friends of friends. There are no true strangers in such a small town. It is in the nature of a living things to end, whether through the gradual degrading of the body or by succumbing to one of the many dangers of the world. But this loss shook her in a way no previous death had. This one had spirited away with a piece of her soul upon departure, leaving her a half empty.

She tried to be present for her grieving family, to gather together in the way Alecani do when someone they love dies. They needed her more than ever right now. Yet she found herself drifting, not fully feeling the grief. Just letting her mind pass into a numbness she could not fully describe. She would see her family members cry, watch them leave with offerings for the grave, but she was unable to shed any tears. Not being able to share in mourning, she felt she was hurting her family in some way. She felt herself a burden.

One early morning before the sun came up, Nym quietly left. She did not plan her departure, she did not know where she was going or how long she would be gone. She left no note, and took no belongings. Pushing off the stone porch, her wings spread, she felt the cool morning air fill her lungs. She relished the sensation of the soothing coolness filling her chest and chilling her throat. Onward over the endless horizon, she pushed her body past her breaking point. She focused on the feeling of burning in her flight muscles, the tightness in her chest as she struggled to breathe. The landscape was a blur, she paid no mind to the passing hours as she ventured on. How long had she been flying? How far had she come?

At some point in her seemingly endless flight, the tears finally came. She sobbed and sobbed, tears staining her face, the light of a new morning sun catching them in a glint as drifted away from her. All strength left her body as she descended into the verdant forest below, breaking the canopy and finding herself beneath the branches of a vast tree. She wept into the roots, little spirits gathering to touch the places the tears soaked into the moss. The sounds of her grief echoed pitifully into the old grove. Distant deer turned an ear to listen, birds ceased to sing, and the little spirits gathered in number around her. Their light faded as they took on her grief as their own, being empathic creatures. It seemed like the whole forest was weeping with her.

The weight of Nym's sadness was such that the little spirits felt compelled to sooth her in some way. With the root of the great tree to cradle her, she fell into a deep and heavy sleep as the tears slowed to a stop. The spirits called down through the roots, calling out for the help of a special plant that would help heal the wound left in her heart. Soon, little green spirals sprouted between her fur, unfurling into the feathered leaves of a grand fern. When Nym's body was shaded entirely by these ferns, the tired little spirits sank into slumber around her. The broad leaves took in the sunlight like any plant, but would instead use it to sustain Nym's body while her soul was replenished in this deep sleep; the Fern Sleep.

And there Nym lay for two years. The ferns stayed green through every season, taking in the warmth of the sun and feeding Nym's body. The creatures of the forest resumed their lives around her, and the group of little spirits ensured she would stay safe from harm. When Nym finally awoke, she had experienced a profound change that would take years to manifest, bringing her down a path no other Alecani could walk."