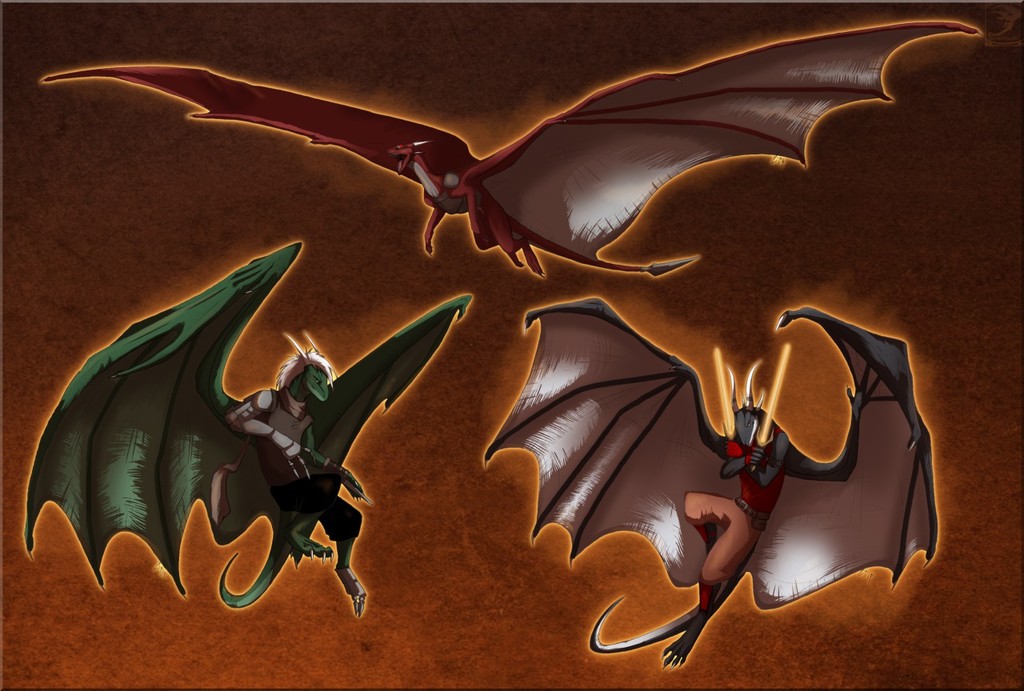 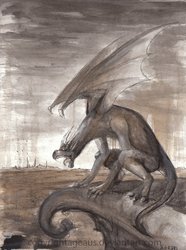 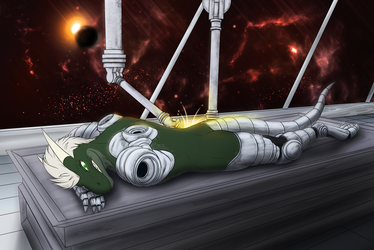 Draconic Evolution by TwilightSaint (with story)

This was an epic piece I got from

TwilightSaint a few years back! I imagined it as a kind of RPG game cover and they certainly delivered.

Hyshaji Nightdragon, on the right side, a Sword Mage. A class that enchants his weapons with elemental auras to enhance their properties. Hence, the glowing swords.
Yakumo, on the left side, a Ninja/Assassin. An agile and rugged fighter with cybernetic enhancements and wind-based magic. And hidden wrist blades for all his close engagements.
Ferryl, on the top, a Warrior and literal Tank. Cybernetic armor to enhance her natural toughness and the visor serving as prosthetic eyes.
She's a Feral too, hence the nickname, also known as Wyrms. That differentiates them from the Dragonkin, which evolved as bipedal species. In the context of this tale, at least.

The characters are part of a story I work on from time to time. I'm not sure how good FA is as a platform for uploading writing, but this one is being updated at:
http://www.fictionpress.com/s/3269671/1/Draconic-Evolution

"A world where magic & technology collide. Where nations of Dragonkin & other Beast races that once united to drive out otherworldly invaders. The time of unity has long past. A Black Dragon finds himself drawn into a new conflict threatening the stability of this world, while being drafted into a guild seeking clues about the Age of Ancestors: the long vanished race of humans…"

Humans are a myth and legend to the inhabitants of this world, consisting of various species of mythical and beast creatures, both anthropomorphic and feral varieties. Both technology and magic are practiced and developed side by side, competing for the upper hand.

The inhabitants were once drawn into a long war against invading demonic forces from another world. While the home team was eventually successful in defending their world, the long running effects of years of war were still being felt.
The once largest kingdom in the world was split into the northern Sentasyu region and southern Kurlos region due to conflicts of interest that were never resolved as the war concluded. While a relative state of peace exists, the two sides remain at an uneasy standstill and the smaller countries dread being caught up in another conflict. Different regions suffered varying amounts of damage during the war, leading to a massive economic division. Travel in certain regions remains hazardous due to the abundance of wild creatures in the devastated, less populated areas, and various forms of outlaws, forced outside of their countries due to the economic unease.
The popularity of guilds arose as those with similar interests banded together, determined not to be separated by regional borders and conflicts.

Hyshaji, given the call sign Nightdragon, joined in the war effort as part of a specialized mercenary strike force. The squad was highly successful in their missions. However, as the war concluded with the demons driven back, their base of operations was attacked, seemingly betrayed from within.
Hyshaji escaped, but was left with a petrifying enchantment that left him suck as a statue on a bridge for years. He was eventually found and released by Yakumo and Ferryl, two members of a guild, Storms of Balmung. Joining the guild, he aided in their missions relating to studying the Age of Ancestors: the long vanished race of humans, which were supposedly connected to the demonic invasion.
Mentored by Yakumo, joined by Ferryl and team medic Yuuka, Hyshaji would be confronted by new foes and the ghosts of his past.

In particular, that his squad had really been created as an experiment to test a form of mental linking, allowing them to share skills and knowledge without actually thinking about it. While it was partially successful, it also resulted in the squad sometimes sharing memories and emotions. The greatest danger was that the squad was made up of Dragonkin of different elemental affinities, which begun to conflict with each other. With Dragons normally being strongly affiliated with only one or two elements, adding multiple elements into the mix stood a high chance of abruptly killing the Dragon as they aged. Despite this, Hyshaji persisted in confronting the secrets behind his troubled past.

Critically wounded in battle, Hyshaji’s body was re-built using genetic material from a stillborn Gargoyle. As a now Dragon-Gargoyle hybrid, dubbed Arysdron, he at first felt he was a different being all together and tried to disassociate himself from his former self.
But something begun to arise within him, an almost split personality that begun wrestling with himself for control. This ‘Arysdron’, was in-fact a representation of who his Gargoyle genetic material donor would’ve become.
After a fierce battle on the mental planes, Hyshaji & Arysdron were able to accept that they were two sides of the same coin. Their hearts were connected. They were both Nightdragon.

With the ability to change between his two forms at will, Nightdragon rejoined his Storms of Balmung team members in their missions and adventures.