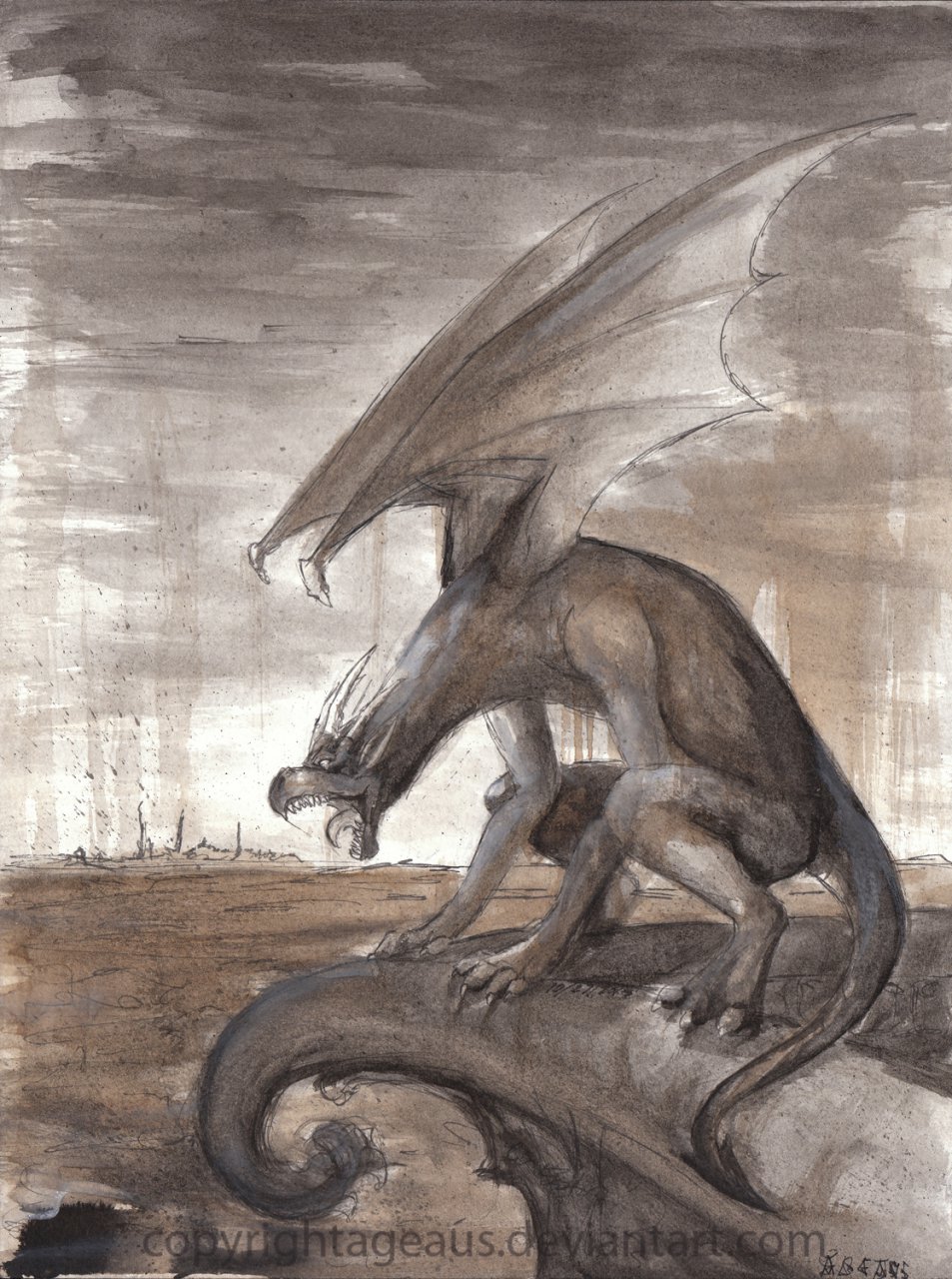 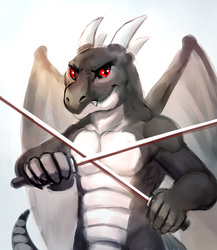 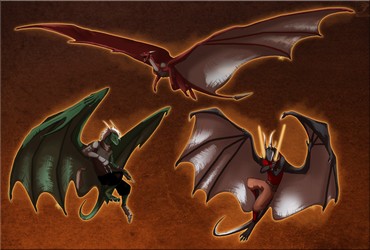 Captured in Stone by Ageaus (with story)

Part of Ageaus' Halloween Horror Sale in 2013, themed around a haunted castle.

I wrote a short story to go with the scene:

Finally, the doors gave way.
Panting heavily, the dragon brushed the splinters aside and glanced around. The chill of the night’s air was practically refreshing after his venture inside that old, abandoned building.
Something was very wrong with this place. While he was quite a match for any physical enemy, what had been following him was a kind of mysterious presence. A feeling that he was being grabbed, sometimes pushed, sometimes led around.
The dragon felt like he'd been wandering in the old mansion for hours. Wandering in circles, perhaps not through his own doing. But at last, he'd made it.

Beyond the rooftop, was the open sky. His freedom.
Claws clicking against the stone floor, he spotted a ledge and sprinted for it. That would be his leverage for taking off. Readying his wings, he prepared…and abruptly stopped.
His knees buckled over, as if some spurt of weakness suddenly hit him. Shoving himself up with his front paws, the dragon tried to resume the motion, only to find his feet stuck. Now in a crouched position, he turned back, to realize that something was very wrong.
The normally black scales of his hind paws had become the same color as the stone ledge beneath them. He could feel where they were, yet could not move them. Running his front limbs over them, they felt not of scales and flesh, but of stone.
And it was spreading.
In the time it took him to comprehend that, his knees had been locked into place, leaving him in that crouched position. Natural instincts would have the rest of his limbs flare up in panic.
But he could only watch with morbid fascination as his tail moved against his will, locking itself in stone. It was curled against the ledge and had gained a spear-headed tip.
Like a...like a Gargoyle.

Front paws went against the ledge as he tried in vain to push himself off it. Trying to beat his wings to aid in the process produced no result. When even those refused to move, he cranked his neck, to see his wings petrified, partially spread and raised above hunched back.
He initially felt the weight as the stone wings pressed against his back, then almost none at all as his back froze into stone.
It was then that he realized that his front claws were now stuck to the ledge as well. While his head and neck threshed from side to side, there was nothing he could do as the stony texture slowly crept up his wrists, arms, then shoulders.
His head was forced to look forward as his neck slowly stiffened.
His jaws opened in a final howl of rage & fear...which never came. That mysterious presence manifested itself one last time, pushing his head into a position matching the pose of his now stone body.
That made his final expression one with his jaws wide open, razor teeth blaring and tongue hissing. His eyes had frozen into place, leaving him looking down over the surrounding forest.

As suddenly as it had manifested, the mysterious presence now dissipated.
The rays of the morning sun were now appearing over the horizon, casting themselves upon the now stone Gargoyle.
The dragon struggled, or he thought he did, but nothing produced any kind of movement. Trying to take a breath without any effect, and realizing that he didn't need to, was going to take some getting used to.
With his eyes locked in place, there was not much else he could do but let his mind wander.
A thought did come to mind. Gargoyles were said to be able to come to life at night.
Perhaps...perhaps he would too.
But that's a story for another time...

"The Castle’s allure draws more than just humans with it’s allure of treasure and wonders. This time gained, it decoration and an immortal defender."