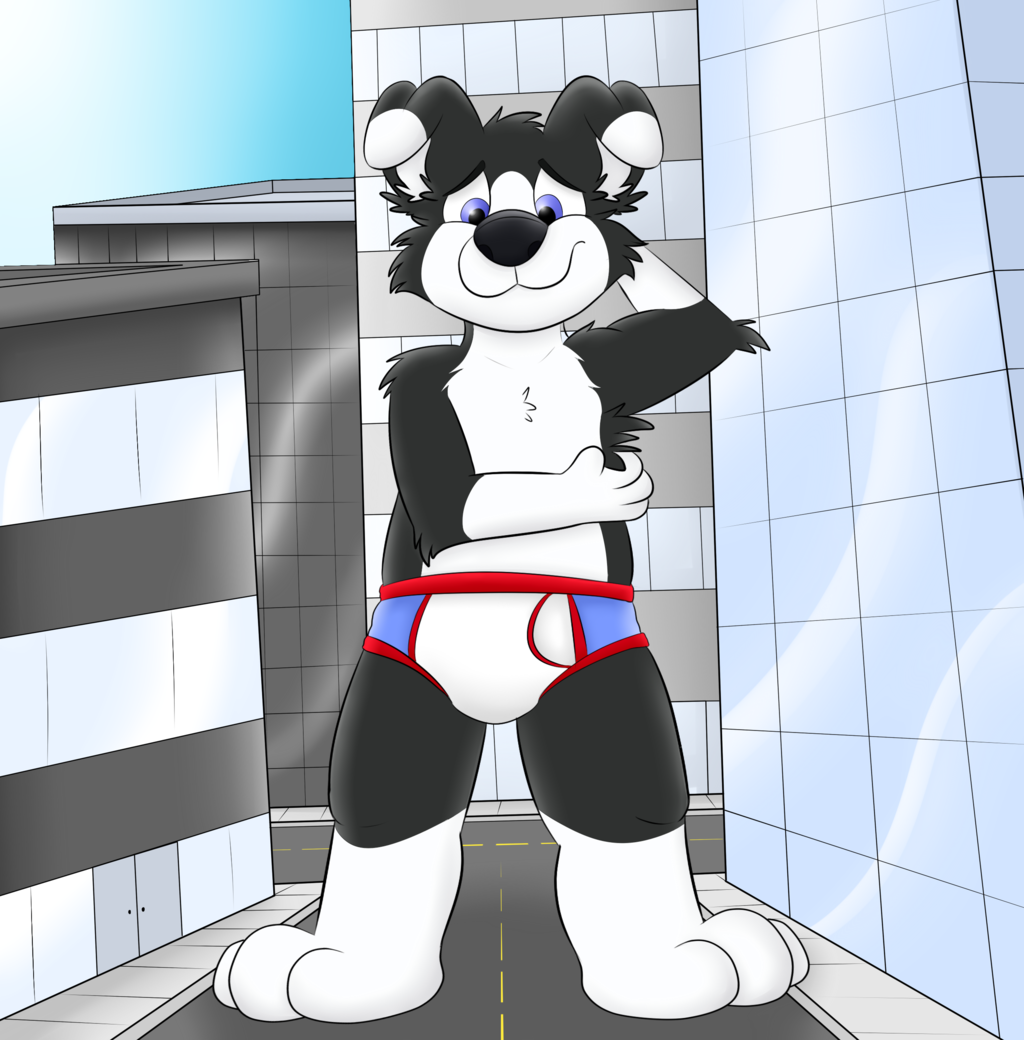 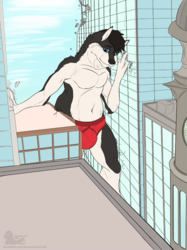 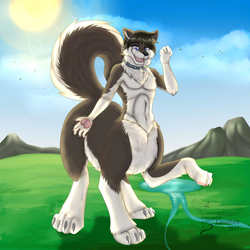 A "big boy" in big undies

So here it is! The first commission of the year with more to come. This is one I have waited for of my big Collie Adam who as you can see here is now becoming a big boy. This is a sequel pic to this pic here of Adam: https://www.weasyl.com/~nh63879/submissions/1357984/from-a-big-baby-to-a-big-boy .

After a lot of time and patience Adam has finally taken the biggest step into being a big boy and has now gone from wearing diapers and pullups into wearing underwear just like his big friend Danny and his little toy friend Max. On a quiet morning in the open Adam woke up with a big stretch and yawn where he then stood up and tugged at his pullups. Whilst looking down at them to see they were dry he noticed something standing below him waving and jumping around. He bent down to see that it was Max waving his arms around calling up to him. Having got Adam's attention Max began to slowly move back and turn away to run from him. Adam followed a tiny Max who ran towards a giant Danny. Adam bumped into Danny and looked up at him with a curiosity. Danny stood there looking down at Adam smiling with his tail wagging and his arms behind his back. "Hey little fella" said Danny calmly "Have we got something special for you". Adam had no idea as to what it could be as he stared at Danny scratching his head. Danny swung his arms around and held out something big for Adam. It was a pair of giant briefs! "TADA!" Said Danny holding the brief underwear out in front of him. "It's your very own pair underwear! Made especially for a big boy like you!" Adam looked at them and at Danny with a nervous look on his face not knowing what to think of them. "Now you can wear underwear like us!" Shouted Max cheerfully to Adam. Both Danny and Max could see that Adam was not excited as much as they thought he would be and wondered if it was too early to introduce them to him. "Do you like them?" Asked Danny with a concerned look on his face. Adam took a step back and looked down with a look of disappointment at what he was being given. "Hey why you try them on?" Asked Danny calmly smiling at Adam. "You want to? Try your new undies on for me and Max?" Adam raised his head up slightly and reached out to the underwear being held by Danny. He took them off Danny and held them in his hands looking at them with confusion at what they were and what to do with them. Thinking it was some sort of hat he placed them on top of his head with his ears sticking out the sides with just the hole at the back to see out of! Danny and Max looked at Adam and laughed as they watched Adam trying to put the underwear on his head then decided to give him a helping hand. Danny took them off his head and put them on the ground in front of Adam and began to take his own underwear off. "Here let me show you." Said Danny as he took his underwear off. "You put one leg through the front at a time. Then you pull them up like so. And then you push your tail in through the hole at the back like this!" Having put his underwear back on slowly he watched Adam as he attempted to put his on. Yet as he did he fell over with a loud boom and shake of the ground near Max! They could both see Adam was having some trouble and began to help him. Danny took his pullups off him and stood him up holding him by his arms. Max grew himself bigger and took the underwear in one hand and one of Adams legs in the other. Adam was however rather ticklish and couldn't help to squirm around and move whilst Danny and Max attempted to put his underwear on him.

After a few attempts Danny laid down on the ground wrapping around him with Max hastily pushing the underwear onto him. With his new underwear on him they stood him up and looked at him proudly. Adam looked back at them and at his body to see his new underwear on him but felt uncomfortable with them. Danny and Max could see that Adam was still not comfortable about wearing them and knew what to do. Max shrunk himself down again and with Danny's help climbed into Adams new underwear. Danny took Adam's hand and they both walked down towards a nearby city.

As they got to the city Danny knelt down and gave Adam a little nudge to make him go forward. "Go on big guy!" Whispered Danny to Adam. "Why don't you go and show the little furries what a big big boy you are now!" Adam took a small step forward and slowly walked down into the city. As he went walking through the city those there were out in the streets cheering and applauding the giant boy in his giant undies. Adam stopped and looked down to see the street below filled with tiny furries cheering and waving to him. With one arm around his side and the other behind his head he looked down with a shy smile and giggle. "Adam!" Shouted Max, peering out of his underwear "look over there! Look at the really big big boy you've become!" Adam turned around and could see near him was a tall building reflecting back at him like a huge mirror. Seeing this he made his way towards the building and looked at it and the reflection of himself. He smiled and giggled as he looked at his giant self wearing big boy underwear, not knowing it was himself. He moved closer and closer to the building attempting to hug the reflection of himself. As he pressed himself against the building the force of his body began to make it crack and fall apart. Seeing and hearing it falling Danny rushed in and picked Adam up in his arms just in time as it began to fall. "Do you like your new undies now?" Asked Danny gazing into Adams eyes with a smile. Adam smiled and nodded his head then cuddled into Danny's body who put Adam down on the ground again to let him sit and play in the city, and put some stuff into his underwear for later!

And there you have it! The story as to how Adam went from being a big baby into a big kid! This is a wonderful pic done for me by BaltNWolf who is a lovely artist that does a lot of adorable babyfur and kidfur pics. If you've not seen him or looked at his gallery yet then I'd strongly suggest doing so as this is one promising artist who I myself am sure to be going back to again.