Captain Below Deck by Jeschke 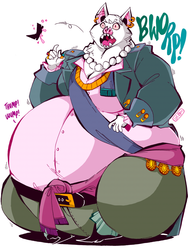 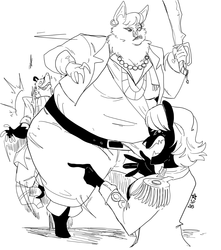 FA's down so this is going up on here first for once, whaaaat

I was prompted by a friend's love of my big bat captain lady, and I was like "I'm gonna do a short little doodle of someone getting ate". Then it became this whole 4.5 minute thing. Hopefully the quality's okay, I mean, I wasn't obsessing a ton over detail, but I think it works?

Anyway, hope you enjoy! And I hope my poor attempt at pirate-y-ness isn't too bad. Synopsis is below, as usual.

0:00 - It's another busy day at dock. Crewmembers all around unloading cargo, arguing with townsfolk over prices, off to spend a night at the local tavern, the usual. You've just gotta pop below deck and grab some things, and you'll be off for the night too.

0:17 - It's pretty much empty down here at the moment, besides the cargo, everybody is up above deck. A rare happenstance on a big ship like this. Though as you take a few steps into the near-darkness...

0:24 - You find you're hardly as alone as you'd like. Seems like the captain didn't have dessert last night like she planned, so there was still one....prisoner around. You call them prisoners in your head, everyone else calls them what they are, the captain's rations. This one, you know, was some smooth talker type, probably why he was still around right now in the first place. You've had enough prisoners try to solicit freedom from you, though, that this one's no different, and you do your best not to look in his direction as you walk past. This time tomorrow, you'll never see him again, just like any other prisoners left on the ship whenever it docks. Though the mention of....her, and how she'll be coming soon, that at least gets you to freeze up for a moment. Well, you've got less time than you'd like then, you'd better be out of here soon. She ain't exactly against second courses if she happens upon them alone where nobody can see them disappear.

0:50 - You step into the next room where all the crewmen keep their things, slamming the door on the talkative prisoner-lunch behind you. And here's your locker, and here's your shore clothes, good, everything's packed, and..

*0:58 - You hear the below-deck door open, and slam shut. Someone's followed you down here. And as it is, by the weight of those steps and the creaking of the ship....it could only be her. The captain. And she came for lunchtime. You don't move; most of the time, nobody ever stuck around to watch her eat, let alone be within earshot, it was both too risky and too much of a reminder of how the lesser crewmembers around (like yourself) could be gobbled up if the opportunity came and she were hungry enough. *

1:14 - Speaking of which, you can hear the unlucky prisoner's cage open up, and he only gets a few words out before she stoops down and reaches in and grabs him almost in a single handful. He's dragged along the bottom of the cage, she opens up and gets right to it.. Almost reminds you of some of your messier messmates come mealtime. But with more slobber and....energy to it. And with the food popping back out for one last attempt to talk his way out of it before she sucks him back in and chews for a bit and swallows him down. After he's plopped down into her stomach, there's only a bit of forewarning before she gets a belch or two out. You almost can hear the dust shaking from the ceiling with each one.

1:44 - Meal done, and with nowhere to be till tomorrow when everybody comes back aboard the ship to set sail, she plops herself down and yawns. If you'd waited until now to go below deck, at this point, you would've given up on getting your things, no way do you want to go past the captain after she's had what first mate Jane has said used to just be appetizers for her. Now you didn't have much of a choice though. She's taking her post-meal nap, and you're not about to spend the night down here, not when you....probably can sneak past her just fine. You've done the same with a room full of sleeping pirates, and she'd be too groggy to grab you if she wakes up, right..?

2:13 - You open the door back to the main room, and there she is, laying kind of off to the side, the prisoner's cage open and nestled underneath one arm like a drunkard with a keg. Her belly rises and falls with each gigantic breath, while (and you try not to watch) her stomach glunks and shifts and kicks out in little spots underneath her clothing.. You have to listen to it gurgling as you slowly creep along, already eyeing your route, you'll step over the rope, avoid tipping those barrels while you go past, just gotta keep things nice and quiet and not listen too much to the wet blorps and glorps of the captain's full stomach, even while it's getting closer and you can hear liquid slopping around from the movement in there, and..

2:48 - Maybe it's just nerves, or being careful, but you do freeze up as her meal starts to try to call out for someone. It might wake her up....somehow. You're right beside her stomach now, not taking a breath, listening to it rise and fall and push at her clothes from the...from the wrong side. And listening to her food try to convince you to help it not be food. Every time her stomach gurgles or a belch slips out of her, though, you feel 90% less like doing anything to put yourself in trouble's way. Rope down her throat, you're just asking for her to swallow, a prybar wouldn't open her stomach up either, you've heard, yeah, this guy is bat chow. You aren't planning on joining him in plumping her out, she's got enough weight to throw around and you like being out in the open air where things are hot and slimy and swelteringly-hot. Doesn't seem like all his yelling is doing anything to wake her up either...he's really deep in there, and she must be used to it.

3:40 - Alright, he's done talking, and she hasn't waking up from it. Time to get going again. You make your way past her oversized stomach, creep past her chest without so much as an ogle to slow you down, and only give the gaping abyss of her open-mouthed snore a glance on your way past. Flippin' canyon with a tongue and teeth, it is. If you tripped and fell in there, all it'd take is a gulp to....yeah, best not to think on it too much. It's bad enough smelling "salty pirate" on her breath on your way past.

4:00 - Up ahead, you can finally hear the outside (and your safety) waiting for you, but you freeze up as she sniffs and seems to stir. You're barely out of arms' reach so you're probably okay, but.. You wait for a few moments longer, stuck listening to her stomach getting to work, before she slurps her lips and keeps snoozing. It's about as much of an "all clear" as you'll get. You hightail-sneak-skeedadle it out of there as fast as you can, faster when you've put distance between you and the captain.