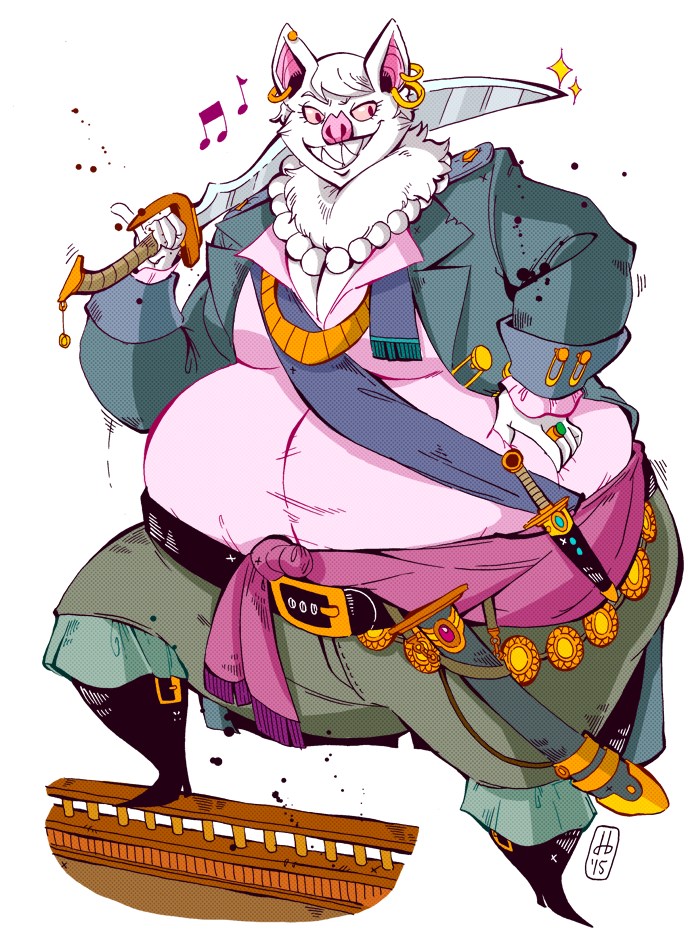 Captain Marianne! Ruler of the Seven Seas! Scourge of the Royal Navy! A one-lady fleet destroyer! A terrifying presence in both size and reputation! Woe betide those who run into her sights, for having one's ship scuttled and robbed is nothing compared to being devoured for dinner! Or at least, that's what she'd brag. But she's actually pretty good at the whole piracy thing, really. Despite coming off as a complete braindead bat sometimes, she has an insane knack for ship-v-ship combat and swordplay. And her gut actually is feared by anybody that's ever heard of her. It's not uncommon for her to take prisoners, put them in the brig, and gorge herself on them over the next day or so. Or eat just about anybody that she comes across. Did I say her gut was feared? It's more like she's so incredibly gluttonous that anybody who doesn't have a fleet with them and is feeling particularly overconfident that day would be wise to turn tail and run and -hope- she doesn't catch up with them. Or maybe have enough treasure that one could just throw it all overboard and hope all the gold pieces in the water distract her enough to get enough time to escape. That's the one thing she likes more than stuffing herself, really. Treasure, shinies, all that. Oh, and adventure and roaming the seas, that's the best too. Total freedom and money everywhere.

At any rate, I was trying to get a character with more personality for her, and got the idea for this'un. And then http://feistydelights.tumblr.com/ opened up for commissions and it's like welp, kind of pulled from them a bit, who better to approach about it? Aaaaand then my expectations got blown completely away and aaaaah. But yeah! Between her and the first mate, definitely fun characters both to think up and to see come to life. :3 Might be more of 'em later on.