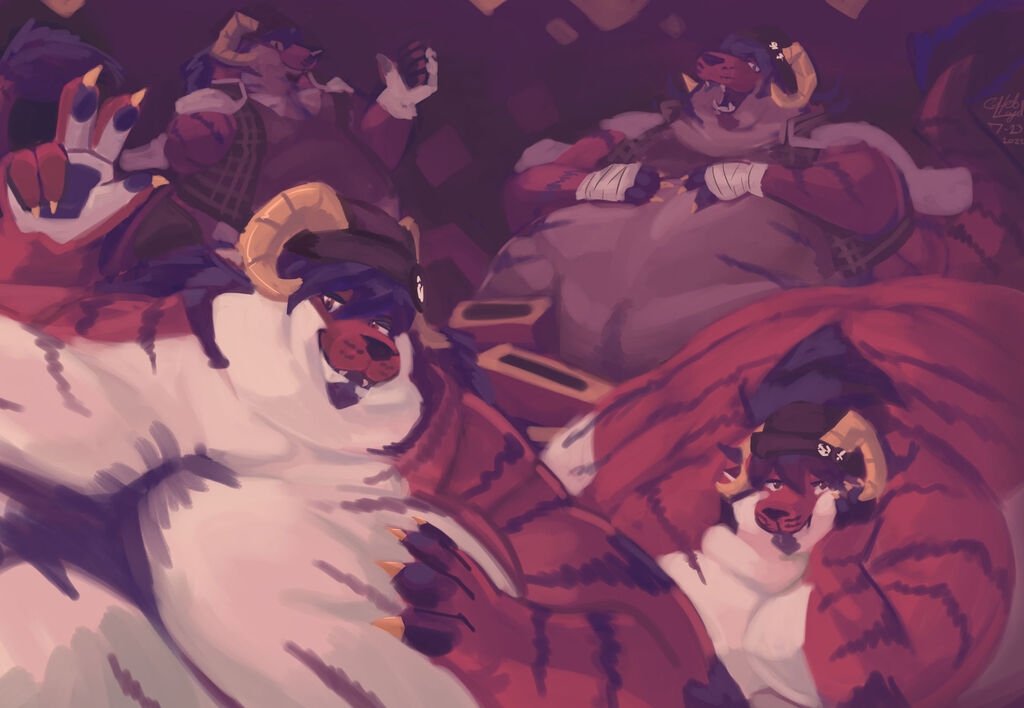 This year was nothing too exciting, a few changes here and there, but let's let's have a look

January --- First artwork of the year was the chair of despair. I had to do to figure out places to draw. At home it’s tough to get started, so I’ve got a limited choice. But once I got that down, I could start arts just fine.

Febuary, March --- I continued work in the style of Bagel-Collie, though they have long sinced moved on past this style and developed it further, I have only adapted it alittle. So I had been feeling stale for a few months. Here’s those examples.

April, May, June --- Towards the middle of the month, I on a whim thought. I took a look at the Duel-links art style. Very animey and such, so that was the direction I took for a few arts. The downside lack the paintery feel and look plasticy, but it was a good exercise. Here's some work in that style

July --- There was a call for the city for a public art project. I sent off a few designs and was happy to see my designs chosen. Learned that I be more prompt at completing arts. It took me til September to finish the murals

August --- I quit Art-fight’s discord server because over-active hyper enthusiastic people are not something I have the energy to keep up with. That and I had a couple run ins with mods saying “This work is not for children” that I figured it was not worth the effort. But I'll let you be the judge.

September, October, November --- These few months I just continued on as usual. Though, at the end of November, I quit my job at retail. So that's something.

December --- MFF 2021 happened at the start of the month. I brought colored paper and decided on the whim to make badges at the artist’s alley. A low price with no examples to show, but I had a good amount of interest while I sat at the tables. Took 2-3 hours for a badge, should’ve definitely charged more than I did, but that’s a lesson for next Convention. Took abit after the con to finish my post-con queue, but I will be sure to get commissions before-con next time. Here’s the collection.

With that said, I got a few goals for this year.
• Do more public commissions; use twitter to build a easier way to get commissions. I use DM’s and direct engaugement primarily. I’d like to build method for folks who don’t have my contacts.
• Studies and practice to improve work quality. There’s a list of things I say “I need to learn that.” I will work on that list. That is something I should share later.
• Integrate work and interest. I have been uninspired to do solely large/macro/muscled works because they’re repetitious. I’d want to new and novel work instead of retreading old ground and so if I can find meaning and purpose to those things, I’d have much more fun with the work. The idea being as important as the quality.