I'm much more interesting on the internet! 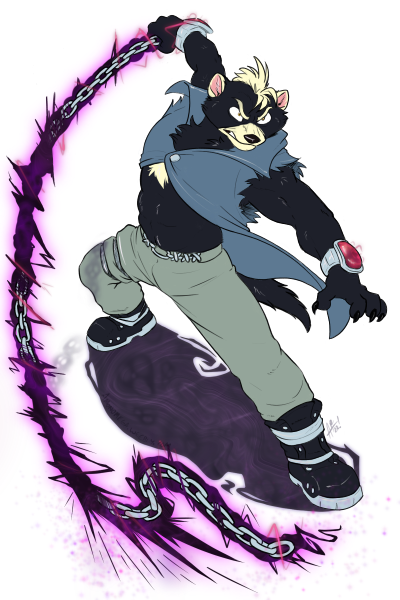 Hey guys! I’ve fallen all but entirely radio silent since my new job started - what I expected to end in stability, resulted in a bit more chaos, but it’s not a bad thing!

I work in retail! Currently, my store is located in a kiosk while the storefront proper is undergoing renovations. That has led to some hectic hours, including on-call esque sort of situations where I am more than happy to pick them up because I need cash dollars!

NO NEW COMMISSION REQUESTS HAVE BEEN ACCEPTED - so far*. As it is, the remainder of my queue has been in limbo while I dedicate time to these new hours, as well as the comic I collaborate on with my wife. Comics are sort of our combined dream, and getting ahead before we begin uploading again in december has been a top priority.

Remaining commissions have been in a state of limbo. Like I said, things are just a bit hectic, and I’ve made deliberate choices to take ‘me’ days when I can to avoid mental burn out. That, of course, doesn’t mean I am forgetting my responsibilities! I’ve done my best to keep everyone in the loop - including this more detailed update to keep everyone up to speed!

This weekend, we had our friend Glaide with us! And then I cover a few more shifts sometime next week. ...but we also have MORE guests coming in from out of town...!! So I’m not sure what is going on! Much less for more time to commit to making serious art.

I’ve been messing on my phone (a galaxy S5) on a program called LayerPaint (I recently... procured the HD verson) to see if I can utilize it to lighten my load somehow since computer time is, generally, at a minimum. Quality on the device is sort of a toss-up as I get used to things, but I’ve made a few rad things on it before! Quality is most important, though...
Anyhow, those doodles I’ve been doing? All tests to see how much I can really do before moving onto doing something complex. Like I said, quality is the most important thing to me. If I can’t give my clients my best, then I’d rather not force it.

So that’s life right now! Thank you guys for being so patient with me! I really just want to reach a level of normalcy moving forward. As normal as things can be around here, anyway.

*All that being said, (fairly) steady income is great, but all my dollars went to bills last cheque, and we’ve a ways to go before we hit level ground as far is bills vs debt goes. Sometime next week, I may be opening up for sketch specials or something to ease the burden before the next pay date, but I certainly don’t want it to get out of control. I’ve kept enough people waiting!