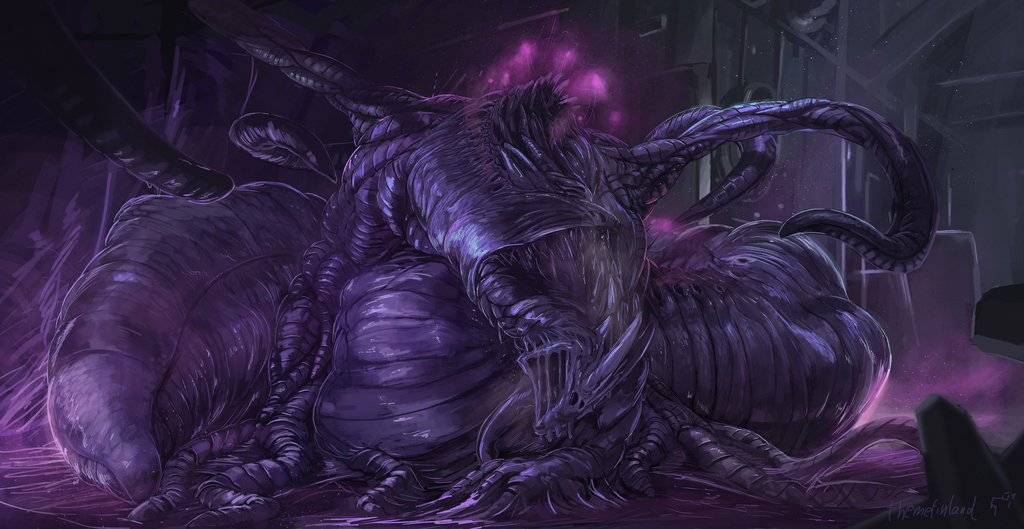 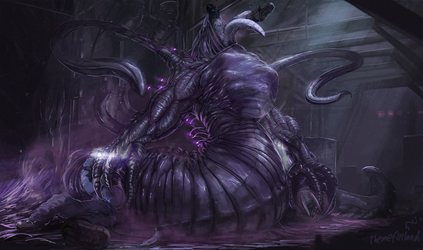 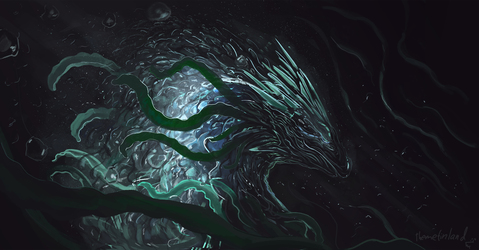 This was a commission for an user who prefers to stay anon. With this 2 part sequence of commissions they wanted me to showcase one of the less shown methods of assimilation for the amalgamate. They also request I write a small description for this scene, which you can see below

"Suddenly his mind came to. He wasn't the same as before and there was a singular, impossibly loud voice in its mind which was impossible to ignore. He could see the ground before him, but this was not his body, no.

The nagas neck bloated and bulged outwards as the now assimilated reptile was being pushed up from its neck and into the nagas maw. The naga stretched its maw wide as the reptile came to its mouth, letting out a cloud of spores as its maw widened enough for the reptiles shoulders to pass through it. As the infected reptiles sensory holes opened up it could finally see itself, its still goo like body slowly coming out of the stretched maw of the naga. It knew it was something else before, but the voices of the hive echoed loud enough inside its mind to cause it to ignore every other thought. Its new form given new purpose by the naga which ever so slowly was pushing the reptile out of its maw by contracting its neck. As the new infected managed to get its head out it let out a roar as if trying to imitate the roar of its previous form. However that roar came out as gurgled and distorted by its now deformed and disjointed maw. As the new infected got its both hands out of the naga it began to pull itself outside and it slowly slid out, making its still somewhat unformed lower body splat onto the ground.

The infected reptile looked back at the naga which seemed disinterested in the infected as the naga reared back on its coils and began to bring up another infected, slowly constricting parts of its body to move its transformed victims upwards its bloated and bulging body. The infected reptile stood up before the naga, its purpose echoing clear in its mind, to spread the hive and create more of its kin. The infected wandered out of the warehouse into the moon lit streets of this desolate place to find more biomass to create a new brood. The naga remained where it was, regurgitating the recently assimilated reptiles for this same purpose, to spread the amalgamate.

After the naga had formed all 4 of the former reptiles it could feel the new energy in its coils which was granted by the biomass and conversion of the reptiles. With this new energy the naga too left the empty warehouse in search for areas more rich in biomass where it could spread the amalgamate and grow"