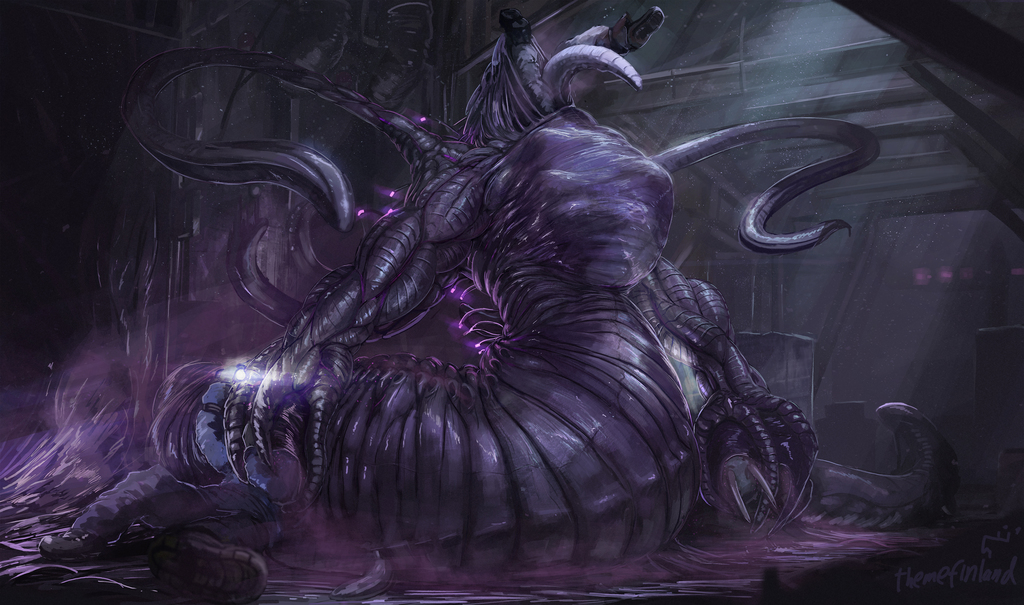 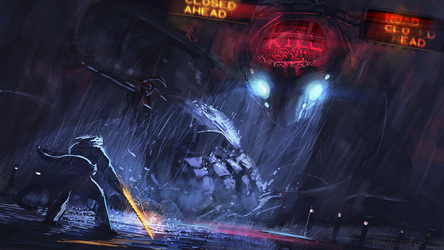 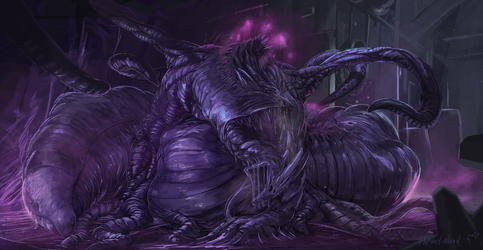 This was a commission for an user who prefers to stay anon. With this sequence of commissions they wanted me to showcase one of the less shown methods of assimilation for the amalgamate. They also request I write a small description for this scene, which you can see below

"You see anything?"
The hushed voice of one of the members of the 4 person scavenging group echoed through the dusty warehouse, or was it a factory? It was impossible to tell in the state it was. After the surrounding area was purged with air strikes and various chemicals to prevent the amalgamate from growing anything living there. After the fact this area was left barren and the streets and buildings were covered in a thin layer of dust and soot, a fact that affected most of the interiors as well. Clanging noises rung out as one of the scavenging reptiles dug through something in the corner.
"Just some coils of metal or something."

As the scavengers continued to pry open boxes with their crowbars and cursing all the nothingness they were finding, something was awakened by the noises which the scavengers were causing. A large amalgamate naga raised its body from its small brood as the sensory holes in its head began to pulsate as it sensed the new lifeforms in its vicinity. The naga had been left disconnected and rid of biomass after the purging of the area and had remained hidden for weeks, unable to grow its hive due to the lack anything living nearby, however these new lifeforms would help it to spread its hive and give the naga enough energy to move further from this desolate area. It remained silent in the small crevice and ready to grab anything that came its way.

The naga could sense one of the 4 scavengers coming nearby from the sounds of them kicking the dust and garbage that lay on the ground. Then once they were close enough the naga quickly reached out to them and the reptile could only let out a short gasp before the naga had wrapped its large webbed claw around the reptiles face and began to feed them spores from its claw. The other scavengers heard this short yelp and were now confused and calling out to the scavenger the naga had just grabbed. The naga realizing its hive was too small to assimilate this reptile the naga instead lifted them up and pushed the reptile inside its stretched maw. The light cones from the flashlights of the other scavengers were approaching the location where the naga was as they could probably hear the faint chugging and squelching noises the naga was making as it was devouring the scavenger.

As one of the scavengers shone their flashlight upon the naga they froze in sheer terror as the naga now launched both of its hands and the tentacles on its back to grab all the remaining scavenging reptiles into its grasp. The reptiles let out muffled yells through the webbing of the nagas claws as the naga made them inhale the spores to calm them down before swallowing them as they continuously tried to hit the nagas claws with whatever they had in hand. However, this resistance became weaker by the minute as the spores began to take effect on them. As the first reptile had already traveled far enough into the nagas winding body it once more stretched its maw to receive another of the reptiles. The air was becoming more filled by the spores the naga was creating from its body as it continued to regain more of its former energy each passing minute. Once the second reptile was swallowed deep enough, it continued to ingest the two reptiles that were left in this same fashion.

Within several minutes there was no sign of the reptiles apart from their flashlights that laid on the ground as the naga began waiting for the reptiles to become thoroughly assimilated inside its body. However the reptiles that were now inside the naga would soon be given a new purpose by the it."