(I have finished uploading my backlog! However, this gallery does not contain all my old work. For a more complete collection, check out my FA or Google Drive.)

What you can expect to see here:
The majority of my art involves fatal, same-size, unwilling, oral vore, with both female and male preds and mostly female prey. Digestion is usually implied (but not often shown in detail.) I sometimes bend on all of those things, but pretty much all my art is at least vore-adjacent in some way. I'm not the greatest artist in the world, but I'm working hard to constantly improve!

I also write a lot of stories! These mostly tend to be short stories between 1000-4000 words, and often they are attached directly to my pictures. I tend to focus on world- and character-building in my stories, though occasionally I'll have stories dedicated to a specific concept or idea. Many of my stories are not directly related, but take place in one of several shared universes, or with a recurring set of characters. I dream of someday writing a novel, though I don't know if that will ever come to fruition or not.

What you should not expect to see here:
Anything explicitly sexual. There will be no explicit nudity, and no explicit depictions of sex. Sometimes sex as a topic is mentioned in a story, but if it happens, it'll always "fade to black." My gallery in entirely SFW (at least compared to a lot of vore -- I would not recommend browsing my gallery at work.)

I've got a few other galleries where you can find my work! A few of them (Tumblr and FA) have all my old work, and the others are new and don't have anything in them yet; I'm not planning on uploading my whole backlog of work to those sites, but rather just some of my favorites. My Google Drive folder has my entire catalog, but doesn't have all the descriptions. My plan is to keep all of these up-to-date from here on out.

I also take commissions! I am not always open for commissions, and will usually make some kind of post announcing when I am opening slots. But if you do have something specific you want and even if I don't have slots open, you can still shoot me a message and I might take it if I'm not overly busy. Commissions are SFW only. Commission info can be found here: http://www.furaffinity.net/commissions/rabbitinafoxden/

I have several persistent settings that I write stories/draw pictures in, with some recurring casts of characters. These settings are as follows:

The Den is the name of a nightclub in a fictional city of anthros, and I also use the name to refer to the setting in general. The idea is based off a novella I wrote some years ago, and has expanded into its own universe since then (with some changes.) The goal of The Den is to create a vore-based setting that is at least somewhat realistic (with certain accepted hand-waves regarding biology, like the ability to safely swallow a person whole), and to put some real thought into what the societal implications of vore would be (though it's not perfect, of course.)

In The Den (the setting), the world is populated entirely by anthropomorphic animals, with a level of technology very similar to the real world. In this setting, all mammals, and only mammals, are anthropomorphic, and there are no humans. Vore is an accepted thing in this world; members of predatory species are capable of swallowing other anthros whole, and certain prey species (especially rabbits and mice) tend to breed explosively, so a wolf eating rabbits could potentially be seen by some as a service to help maintain balance. Some members of predatory species choose to survive entirely off non-mammals (like fish and fowl), making being a "predator" as much a lifestyle decision as it is a matter of species. Thus, actual predators are an extremely small percentage of the population, and there are strict societal rules regarding when and who they are allowed to eat. One result of this is that predators can't really talk openly about their predatory inclinations, and just being a predatory species has the potential to scare prey away.

The Den (the fictional nightclub) was created as a way to combat this issue, and is a predator speakeasy of sorts. It's run by preds, for preds, and is meant to be a place where predators can congregate and socialize. Preds can talk openly about hunting strategies, their recent meals, or whatever else they might not be able to bring up in "polite" conversation. Preds will also sometimes lure prey there to eat them (either on the dance floor or in a number of private rooms in the back), but that isn't the main purpose of The Den: it's a place to socialize, not hunt.

The stories in this setting mostly revolve around a small group of friends, and their relationships with each other and the world around them. The main stars are Lindsay, a petite female calico and ambush predator; Alex, a female rabbit who works as the main bartender at The Den and identifies as a predator, even though she is biologically incapable of eating people; Kurt, a male mouse and Lindsay's boyfriend; and Rox, a female wolf with a dominating personality and an unrequited crush on Lindsay.

This is my other "modern" setting, which sometimes gets confused with The Den, but has very different rules. This setting has been referred to in the past as both my "anything goes" setting and my "casual digestion 'verse." These stories mostly take place in a single large city populated mostly by anthropomorphic animals, though humans do exist in this universe. The setting is modern with a slight sci-fi/fantasy bent -- technology is a bit more advanced than real world technology (things like hologram-phones are common), and magic is also a known quantity in this world, with things like gods and fae walking amongst mortals fairly often. The inhabitants of this world come in every shape and size, and the world reflects it; most businesses have amenities to cater to customers ranging from as small as six inches to as tall as twenty feet.

Vore in this setting is both common and extremely casual; expect to see big predators grabbing someone on the street, gulping them down, and continuing on their morning commute like it's completely normal. Prey will fight back, of course, but if you're not strong enough to defend yourself, don't expect anyone to help you. I actually think a majority of my stories are in this setting -- unless the story is actually about one of The Den characters, or refers to its rules specifically, chances are that if you're unsure, this is where the story you're reading takes place.

The Age of Guilds

This is my high fantasy setting. I'm a huge fan of fantasy, and honestly don't write as much I'd like, so it's only natural I'd mix some vore into that kind of setting, as well.

This world doesn't have a name, and is inhabited by both humans and anthros, as well as a few other traditional fantasy races, like fairies and merfolk. The world in general tends to be very dangerous; powerful magical creatures roam the countryside, and people traditionally would either live in large-ish settlements or small nomadic tribes to protect themselves. Magic exists in this world as a natural energy flowing through all things, and anyone is technically able to manipulate it, but using magic and casting spells is both difficult and dangerous, so only those who devote their lives to study and training are able to utilize it to any great effect.

The story, however, takes place during a time of great technological upheaval; a mage invented a way to make magic more easily available to the masses (by putting pre-cast spells in bottles), and the world changed overnight. Inventors found new uses for magic that mimic modern technology (especially regarding communication and manufacturing) and vastly improve the quality of life of the average person. Large guilds have sprung up to exploit and distribute these new technologies, wresting power and public opinion away from entrenched monarchies. The result is a world that is advancing rapidly, but that also feels unstable and vulnerable, running headlong into a future it can barely understand.

One of these guilds is the Adventurer's Guild, which is essentially a mercenary guild that hires out its members as heroes and bodyguards. The majority of their work is escorting travelers through the still-very-dangerous wildlands between cities, and occasionally going on archaeological digs to retrieve valuable artifacts from previous Ages. Fight monsters, get loot, essentially. They have a humanitarian bent and are generally well-liked by the populace. The stories revolve around a small group of friends/comrades who work for this Guild, and the various adventures they have.

Unlike my other two settings, vore is not a common thing in this world, but several of the main characters (Fia, Cerise, and Tess) are all capable of it for various reasons. 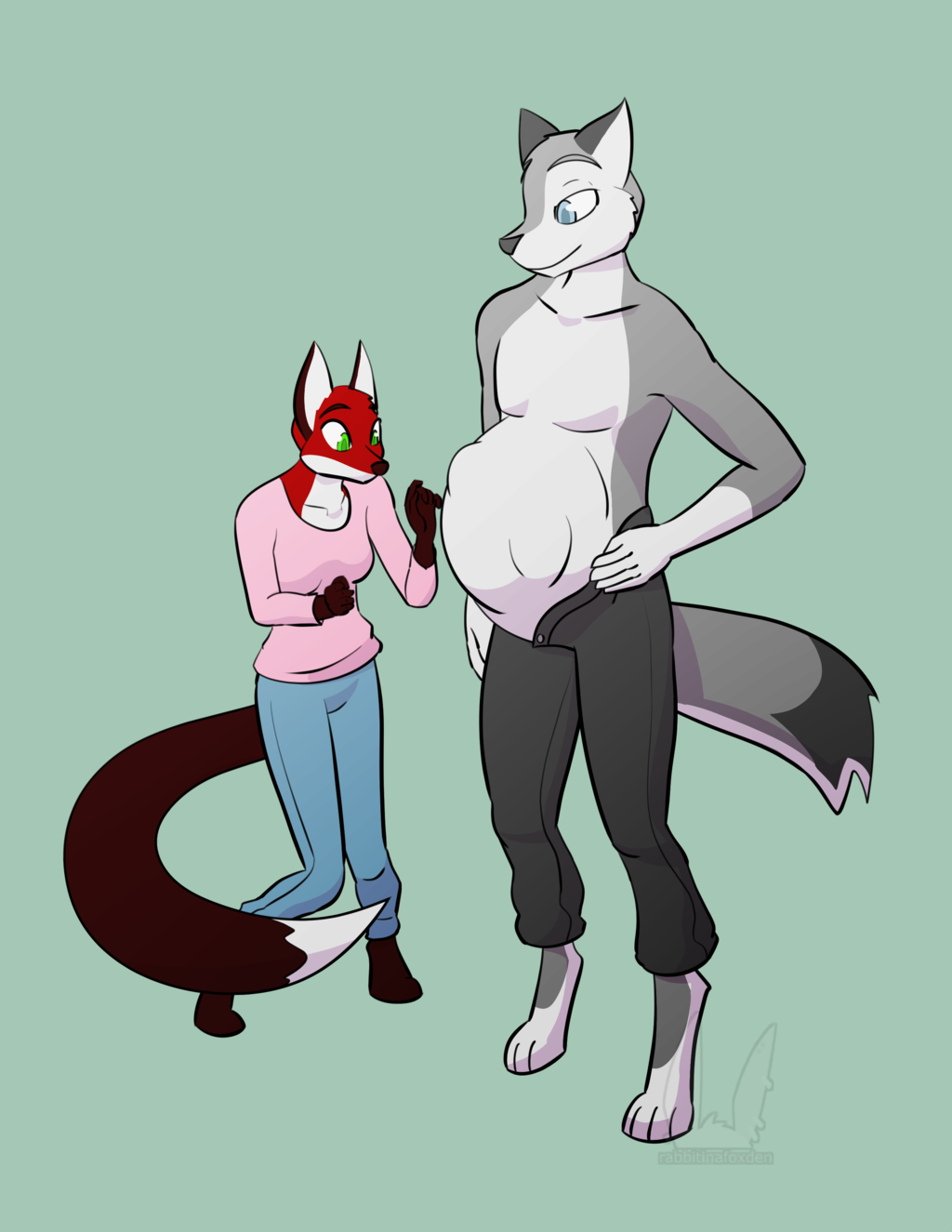 Hey everyone! I'm opening up three slots for commissions. As always, check here for my commission rules and information. I'll keep the number of slots left up-to-date on that page. Contact me through my commission request form if you're interested.