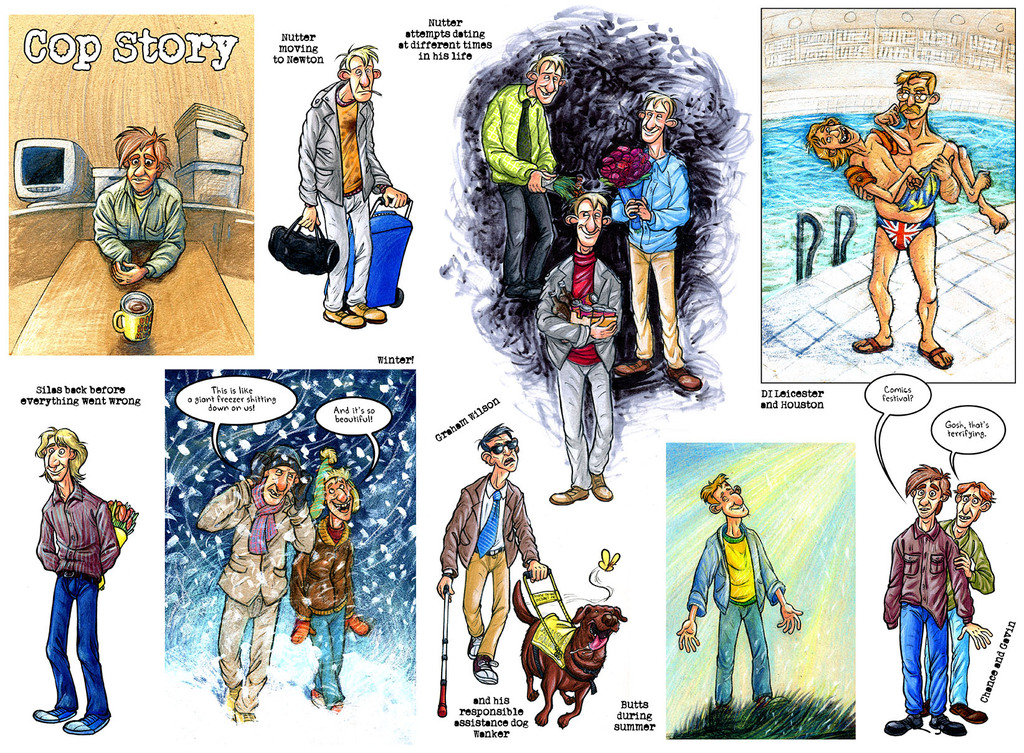 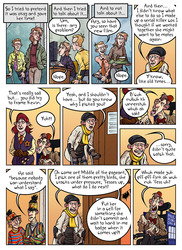 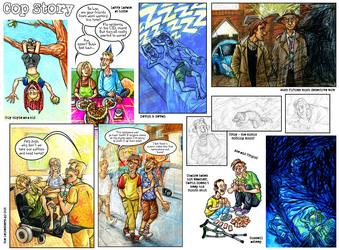 Mostly requests from tumblr this time - I'll do DA requests next and I have a similar journal on Weasyl too.

The first sketch with Chance is a nod to True Detective - I finished watching it this week and it's a very good show, especially for US shows. There are other Cop Story characters who are more similar to Rust than Chance but it just seemed right to draw Chance sitting there with that mug.

Then Nutter moving to Newton - I might actually show the scene of his arrival in the comic as a flashback at some point but metaphorically and physically it was his longest and hardest journey - into complete nowhere, something better than prison but not a happy place by any means. He never travelled much, spent the first 25 or so years of his life in Manchester, then moved to London and never had enough money or time (or honestly intention) for tourism.

And a picture of Nutter giving progressively less fucks about how he looks on a date through the ages. Nutter was in 3 relationships (well, at the current point of the comic one of them is in the future), each one more disastrous than the other (this should give you some idea). I’m not sure if you can even call his first crush a proper relationship - he was a constable in Manchester and he really fancied one barmaid in a pub his colleagues frequented. At that point the only thing young Nutter knew about interacting with women was the vague suspicion that he should do something different from what his father usually did. It never went anywhere.

Eventually he got promoted, moved to London and had a “proper” romance with a criminal psychologist working at his station. It ended in complete shambles not long before the events described in the comic so far and it definitely contributed to Nutter’s mental state at the time.

Nutter’s future romantic interest is something I’m considering re-writing - I really dislike the idea of Nutter not finding someone he’d click with for three times in a row but at the same time I can see how bad stuff that happens because of it can lead to some good events too so maybe I should keep it. After all, meeting people that are not right for you doesn’t mean nothing good comes from that and also doesn’t guarantee any good (or bad) events in the future.

Then Leicester and Houston in the pool. I really should draw less pictures of Leicester being a model dad because most of the time he isn’t - or to be more exact, he is a good dad when he is with his family and acts like his family doesn’t exist when he’s with other people. Sometimes I think that if you cross Walter White and his cop brother-in-law and remove all meth-related stuff you’ll get Leicester. Or his US version at least. Anyway, Houston likes water and is not aware that his father picks the time when they are less likely to stumble on any other cops living in the area.

Young Silas which was honestly sad to draw because a lot of how Silas is as we first see him in the comic is unlucky circumstances and people being people. He isn't so bent on revenge for no reason.

Nutter hates winter but mostly because he can't be arsed to dress warmly enough. Butts likes winter but honestly he likes most weather.

The picture with Wanker and Graham is more of a rule than an exception when it comes to Wanker's performance as an assistance dog. He also chases cats, gets in fights with other dogs and... man, I really have to draw a couple of short comics about these two.

And the picture with Chance and Gavin was drawn during a local comic event - it occurred to me that not all my characters like comics as much as I do (and when it comes to mainstream comics we actually share some opinions). When people doodle something at comic gatherings they tend to draw their characters being all "yeah, read comics!!!" and I think I got to a point in my life where I can imagine people being indifferent to comics without them being boring or bigoted. Maybe this is what getting old is...

Doodles are fun to draw but I should work on comics more but some days I just don't have enough energy. :[