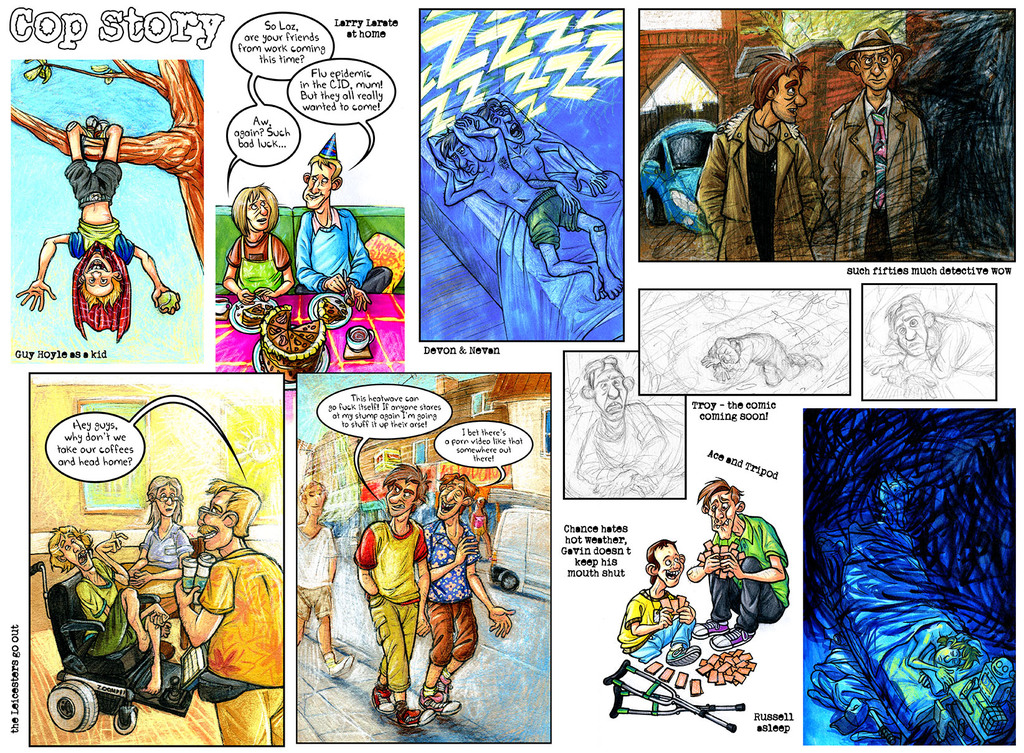 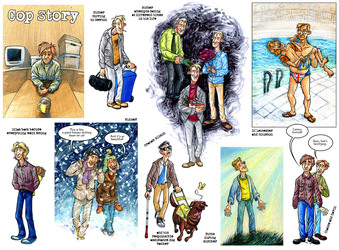 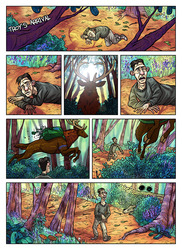 Random Cop Story -related doodles and DA requests - I have a similar journal on Weasyl too.

Guy Hoyle as a kid - he had a pretty happy childhood. Sort of… not sheltered but also not tough enough to mess him up.

Larry Larate at home - let's just say his mother sees a different side of him. Stop talking with your mouth full and stop lying to your mother, Larry. 8I

Devon and Nevan asleep - well, Devon asleep. Between his brother snoring and him being depressed Nevan doesn’t get much sleep in general. Someone of the two of them has to worry about stuff, I guess (and they do have things to worry about, lack of any job, an uncertain future and living with a borderline alcoholic aunt to start with)...

Chance and Teddy Lancaster being all classy... This picture could have been a joke if it was remotely funny. And it could have been stupid too... At least that tie is definitely stupid. I probably shouldn’t try to explain this but if you want clues, have this:
When My Time Comes | From Auschwitz To Ipswich | Some Better Day

The Leicesters going out (or trying to) - DI Leicester's family still doesn't know what's going on. Yet. He's sneaky like that, plus he genuinely believes he's doing what's best for Houston so at least his motivation is good I guess...

Chance doing something he doesn't normally do - he doesn’t wear t-shirts in public any more. Except when it’s really hot outside because we all know a few days with weather like that make you want to take off anything that won’t get you arrested for indecent exposure in public. Gavin is invoking Rule 34, Chance might apply a left-handed punch to the teeth.

A bunch of sketches with Troy - it's really fun working on this page and I pencilled it quite quickly, it just took me so much time to get to it. I hope to finish it soon.

PCSO Ace Trotley and Tripod because Tripod doesn’t really have any friends his age. Children learn to socialise either when parents hang out with other parents or when a bunch of kids end up together in some group. Tripod’s parents never were the kind to organise playdates and Tripod didn’t even go to school regularly before he met Silas so he never learned how to act around other kids. He did learn how to act likeable enough around adults because it was essential for his survival. So Tripod sticks to other adults Silas knows, in a clingy and somewhat manipulative way troubled children often have. Tripod’s closest friend is Ace because Ace is amiable and kind enough to be nice to the kid, doesn’t mind playing childish games and sort of relates to how isolated Tripod feels.

And Russell asleep - the kid hasn’t had his room modified in any way since he lost his sight, both because his parents were busy with other things and because he doesn’t let anyone do anything to his room. Considering how fast interests change at that age he is going to be embarrassed by his posters and toys soon, considering that none of his friends want to hang with him now he doesn’t care.

More to come (after I get other things done)!