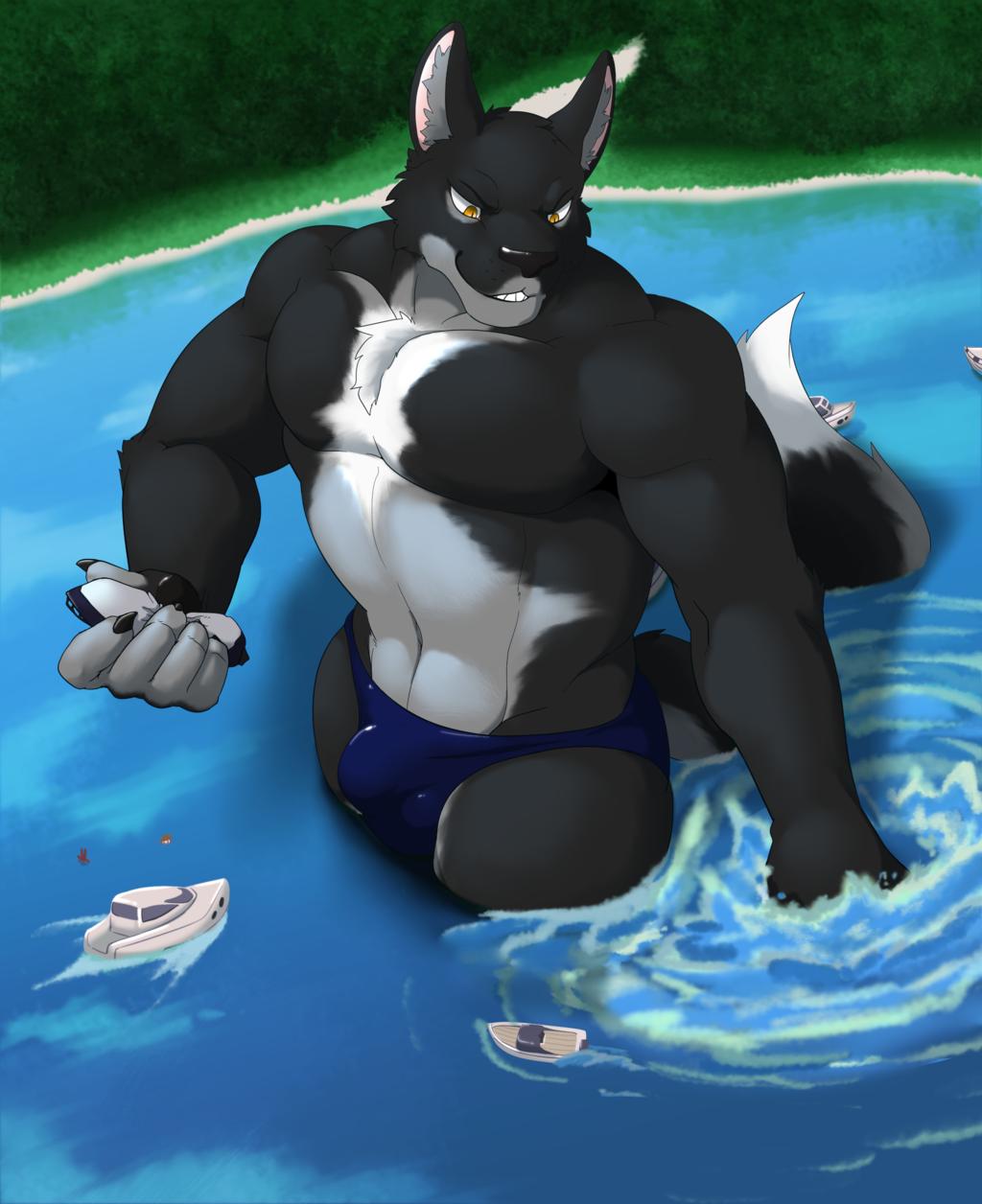 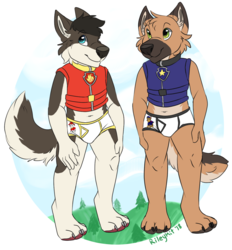 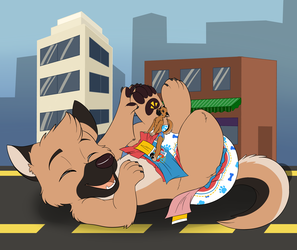 Well here I am with another awesome macro pic of my big and bad wolf Shadow. Before I get into the usual about this I just want to say a big thank you to the incredible artist Croiyan who made this for me and has really captured Shadow and his full destructive way perfectly.

Now that Shadow has found so much pleasure in being a macro and rampaging he's enjoying every minute of it and has not stopped looking for new places to go rampaging through and things to play with. On a calm yet brisk day he found himself near a small town with a large lake at the edge of it. As he got towards the town and the lake he wondered what to do. Should he go straight into and rampage in the town and swim across the lake to another town or place filled with tiny furs and tiny things to destroy. Or perhaps take to the lake and this town by surprie then head across to the other side. After pondering the choices he chose to go with the latter and make a big impression in a small but big way.

Having shrunk down to a normal size he headed into the town and went straight into a clothes store. Once their he found a pair of dark navy colored speedos, with a tag that said "fits all sizes, both macro and normal" which were just perfect for him. Having tried them on he knew they were just perfect for him, with both the color and tightness of them on him and how much it showed his bulge. With them on him he grew as big until his head was about to push through the ceiling, leaving the owner hiding in fear and letting him go with them on. Calmly walking through the town at a normal size he looked around at the buildings, with a demonic look on his face thinking of how fun it's going to be crushing and smashing them, before making his way towards the lake. By the time he got to the lake he dived into the water and swam down as deep as he could. When he got down as deep as he could he stated to grow big, looking up at how close he was getting to the surface of the water.

The boats and yachts sailed across the water as normal without those on them not knowing what was beneath them. In a matter of seconds one yacht began to shake and move violently with those on it wondering what was happening. As those on it looked down at the water, they noticed something large beneath it in the water that was getting closer and bigger. Suddenly those on another boat nearby looked out to see a giant hand rise out of the water and take hold of the yacht followed soon afterwards by a giant wolf rising up and growing bigger. A number of smaller boats felt the water rise and saw the growing giant rising up from beneath the water, holding a yacht in its hand, and begun to race away towards the shore. As shadow held the yacht in one hand he looked to see some of the other boats sail past him. Slowly he swung his hand and tail around in the water around the boats, sending them across the lake and over the town in a large wave of water. As he watched them fly and go in all directions he slowly begun to turn the yacht in his hand and crush it. With his other hand he took a yacht in front of him and pulled it towards him. Spreading his legs he pushed it between his legs and under his giant bulge where he slowly crushed it, whilst smashing another couple of boats with his tail behind him before pulling one towards the back of him with his tail and crushing it with his butt and tail.

Having crushed and smashed the boats and yachts in the lake near him he slowly made his way out and into the town to continue his destructive rampage, crushing, stomping and eating until the town was totally destroyed. By the time he destroyed the town he flopped back into the lake flooding what was left of the town and swam across the lake towards the other side, where he got out of the lake and began his destructive rampage all over again on the other side!

So there you are! Another big pic of my big bad wolf and a big story to go with it. I'm so made up with having him that I'm going to look into having some more big and fun pics of him. Of course they won't all be like this. The next pic I might have of him might be one of him and a fellow macro, perhaps having twice as much fun as he has or even something more naughtier! The only way to find out is to keep an eye out and follow me and comment.