"Among my many travels in the desert, all of the incredible things I have seen, one encounter stands out above all others. In the golden sands of Egypt, I happened across a curious figure.

The bewitching creature sat cross-legged on a single stone, sand flowing about it as if it were a slow river, an impossible island of vicious drought. She spoke not a word as I drew near; eyes closed, body arched ever so slightly, as if she were soaking up the sun's warmth and drawing some sinful pleasure from it. At first, she appeared to be a human woman, her skin dark, though I soon noticed the leopard-like spots one would most often find upon a wild cat.

The woman's hands and feet appeared to be some curious blend of human and feline. Each digit was tipped not with a fingernail, but a curved claw. Oddly, her calm poise seemed to disguise the fact that she bore those implements of death attached to finger and toe alike.

From beneath her luscious mane of midnight hair, accented beautifully with gold bands and adornments, protruded a set of distinctly feline pinnae. Each ear was rounded and plush, the left twitching faintly as she tracked my motion through sound alone. Behind that beguiling figure flicked a tail, of all things, long and languid in its lazy pace. By this point, I required no further convincing that this was no mortal, but a creature of myth.

As I drew nearer, she lifted one feminine hand to motion me to claim my own seat on a flat rock opposite hers on her slow river of sand, an island all my own. When I settled, those eyes opened, two glowing pools of amber beneath long black lashes. She then spoke to me, without any sign of concern or hesitation.

"Which is worse, War or Hell?" she asked me, the claws on her fingers flexing.

I answered without pause, though my voice shook faintly, "War. In hell, there are no innocents, but in war there is almost no one but the innocent."

The figure sat there quietly for a moment, clearly contemplating my response, only to simply nod and rise to her feet. Turning away, she spread a broad set of eagle's wings and departed without another word.

I could do nothing but tremble, a bead of sweat rolling down my brow. Those mighty wings buffeted the sand in her departure, stirring and disrupting the slowly moving river of dry earth to reveal a sea of bleached bones.

It was then I knew I had encountered the Sphinx, and the reward I had earned from her riddle was my life."

Most recent: The Beautiful Sphinx 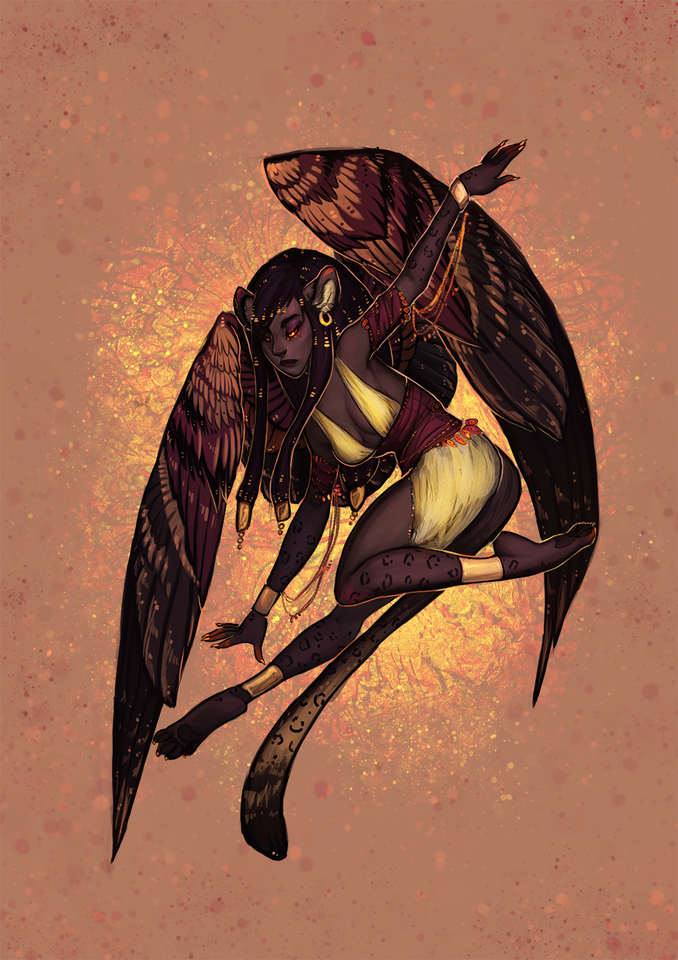