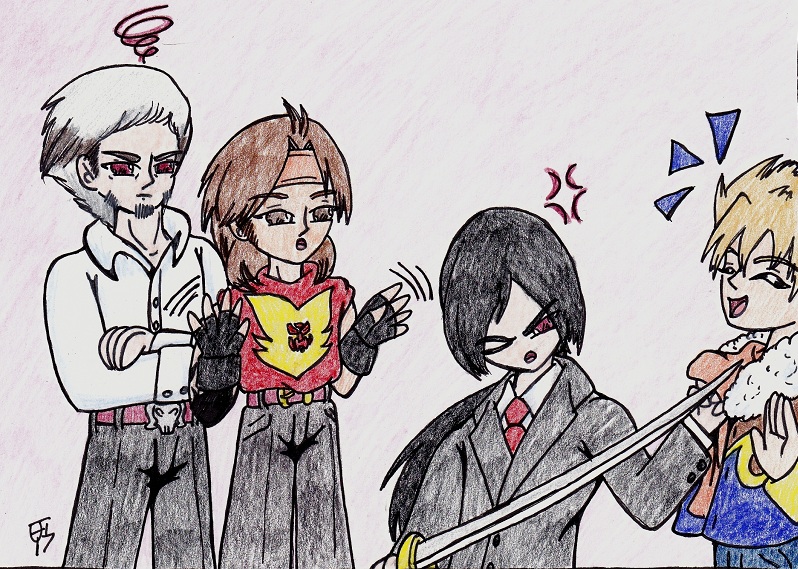 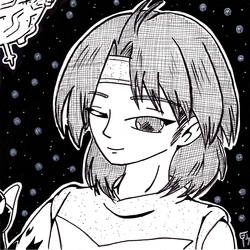 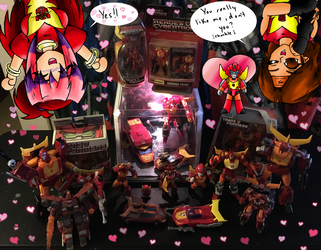 This is pretty much why you shouldn't color with crayon. WOW, THIS SCAN REALLY CUT OUT A LOT OF THE COLORS. @_@ Then again, I wish I had a really awesome scanner, designed for art........! XD

So earlier in the day yesterday I was proofing part of my current "Transformers" fan-fic and had a bizarre little thought pop into my head.............about some Cybertronians fighting over Rodimus. I can't draw robots, so you get the [human] avatars instead............though we haven't really seen Drift's avatar in the comic, I kind of picture him as a well-dressed Yakuza enforcer (as opposed to the stereotypical samurai I see everyone else draw online)--I also admit I've read too many yaoi manga with Yakuza in them. And Blaze............well, Blaze is original to my stories, so I can design his avatar however I want and I pretty much see him wearing a nifty pilot's jacket that has flames on it. XD

My little two-Cybertronian romance (Megatron and Rodimus) has suddenly become a very awkward square instead. laughs I think Megatron's just as annoyed as Drift, because everyone knows Rodimus belongs to him--so this little argument shouldn't even exist...............and Blaze is actually good at annoying everyone around him, in the first place.

Transformers belongs to Hasbro, the avatar designs to whomever at IDW came up with them........and silly little romance and fight is my own idea. lol