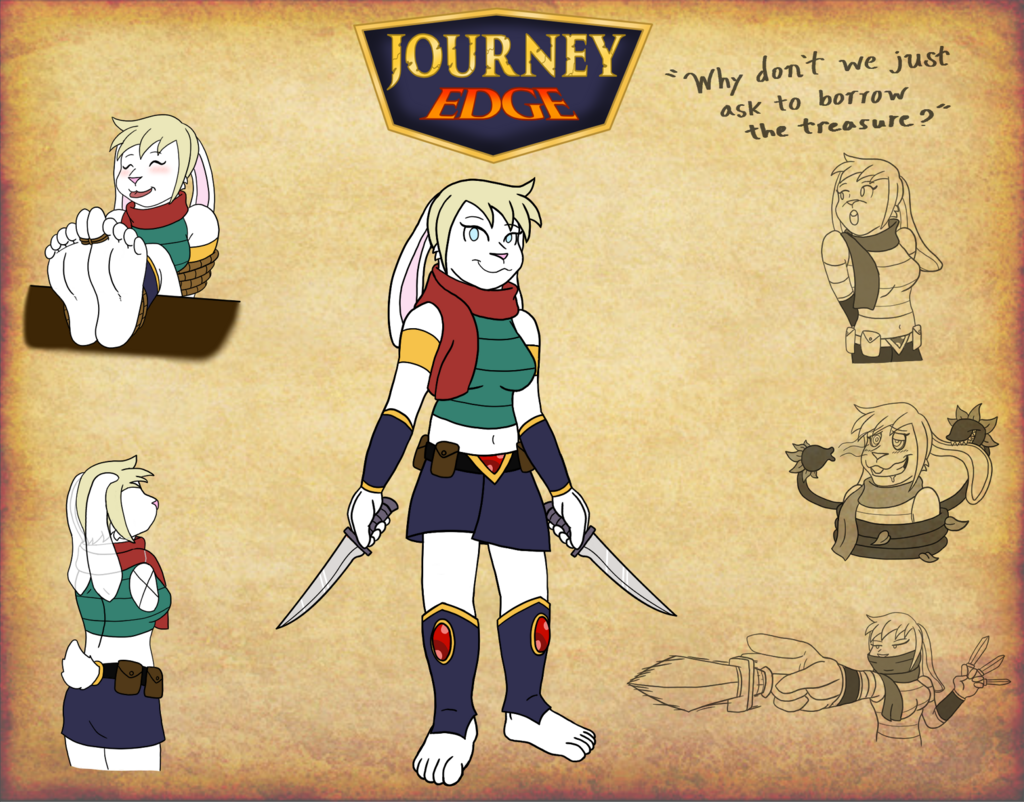 With the 9th year anniversary of the first Wanted entry in a few days (the 8th of August), felt something was special despite the series having been put on indefinite hiatus due to a combination of other projects and a personal lack of interest in continuing it.

I've explained in the past I've had a list of characters/entries I intended to do over the years, but never revealed a full release both to keep said characters a surprise, and not to get people's hopes up if I didn't end up making them.

So in honor of the anniversary (despite the debate of whether or not it will be more in the future), here's my list of who I intended to do pages on before it ended. Maybe one day you'll see some of these made, maybe it will remain a what-might-have-been. Or even maybe one of said choices catches your fancy for either yourself to tackle on your own or to ask for in a art commission. shrug

I listed Sandy in the past as someone I considered, despite her not being an obscure character. But the decision to attempt a full Nickelodeon page came from realizing a couple characters I later added, Sheila from Rocko and Fauna from the F-Tales pilot, were Nick properties too. It didn't get too far beyond the initial planning stage, as I still lacked a fourth entry, and even now still don't know who I would have as the fourth.

Among the last few Victim entries that followed a theme, this came closest to being one of the final pages. Again, idea is fairly simple, picking characters from 80s properties nobody thinks of (well, except Brain from Inspector Gadget, he's still fairly well known). I went with Swiftheart instead of an actual Care Bear because, honestly, the bears have been done, and again my whole theme was obscure choices. So why not Swiftheart Rabbit? And Belfry was just a random choice as I felt not many will even consider that show for something like this.

I said before I had this planned out years ago, but a combination of my workload, disappearing interest, and on/off depression killed it, in addition of not having a fourth entry for awhile. I had considered some popular "suggestions" I've gotten, but again my whole shtick is more obscure choices people wouldn't think about. Found two cuties in TaleSpin that had potential though, but it was too late with me wrapping the series up at that point.

Like the Cartoon Dogs entry ( Victim 21: Cartoon Dogs ), I had one planned for mice as well (along with a better designed return of Izzy's mouse appearance, just for kicks). Gadget has been a constant favourite amongst suggestions and request for years, so figured I'd toss people a bone. Miss Kitty Mouse was a late choice after rewatching The Great Mouse Detective around the time of planning the page. Bridgit is a character from a Canadian cartoon called Eckhart. I didn't watch the show, but figured it's both obscure enough to be included, and I have a weakness for tomboy girls. And Jeopardy Mouse from the Danger Mouse revival, do I even need to say why she was included? XP

I said the last time I brought up the unmade Animal Crossing Victim Page that at the time of it's creation I was, as many were, addicted to New Leaf and wanted to tie-in for that. However when things started to die down, so did my interest to make it at the time.

This didn't get very far, as evident by only two characters instead of a full four. Trophy Thomas was someone I wanted to tackle for years, being the only character I remotely kind of liked from that abomination of a game they dare slap Banjo's name to. And Shazza, well, I have never played any of the Ty games, but thought she looked kinda cute for the character designs they went with.

Like above, didn't get very far by the time I opted to cut down on how many final pages I was gonna do. Sydney I brought up years ago after realizing after all these years that one of the cookie shapes in Dunk-A-Roos are his feet. As for the Caramel Bunny from the UK, just watching her commercials you can see why I had her originally.

Don't really have a long story about wanting to do a page on Penny, other than just I loved 2 Stupid Dogs/Super Secret Secret Squirrel as a kid, and felt Penny was a good choice for the Wanted series.

Kate (The Mysteries of Providence)
https://youtu.be/ynptwN_bSxI?t=285

Never seen the show growing up, but looking that the link I provided of her, you can tell exactly WHY I came close to having her in the series.

SorcererLance talked me into watching An Extremely Goofy Movie many years back, telling me it was one of the better DTV sequels Disney made and I had to see it. He was right, of course. But there was another reason he wanted me to watch the film, and that was Sylvia Marpole.

Unsurprising, I am a fan of the Netflix series BoJack Horseman. And naturally, there were a couple cuties I've liked enough to consider, at the time, having in the series.

What I said above.

While I didn't think much of the show (wasn't great, wasn't bad), I will admit to liking a few of the characters, and Lexi standing out the most for a potential entry at the time.

Carbine almost ended up in the finale https://www.weasyl.com/submission/1300140/victim-finale , but ended up being replaced with Thea Stilton. Mostly because I really wasn't that attached to Biker Mice growing up, and knew I wanted to do Thea Stilton before the Wanted Series ended.

To repeat myself from last time, as you can see above she's been done a few times, thus my interest fizzled out on doing one of her.

I was a fan of the short-lived 2011 reboot, and thus considered not just a solo piece of Cheetara, but even reworking it into a full ThunderCats page with other characters. I didn't get very far and ended up cancelling it.

Like what I did for the Pokémon entry ( Victim 13: Pokemon ), I was originally planned to do the same for the Digimon series. However it never got far enough that I had any characters chosen for it.

Whew... and that's it. Looking over this list, had I made all of these, the series would have had at least 20 more entries. Oh well, I'm happy with the 29 I have done for the most part, and it makes me happy that soo many people have enjoyed those pages over the years.

Until next time, take care of yourselves.