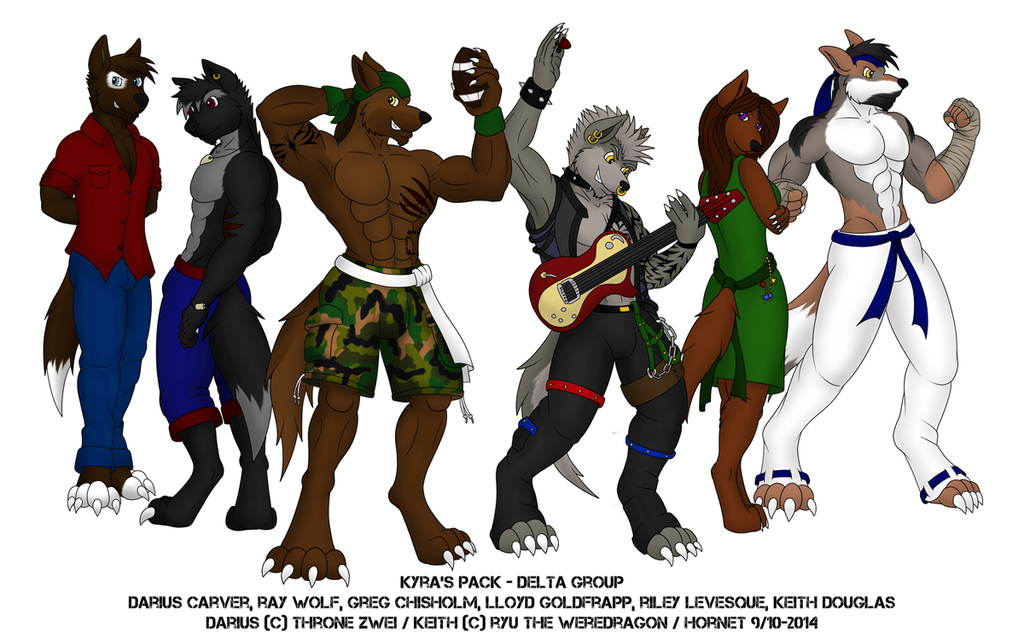 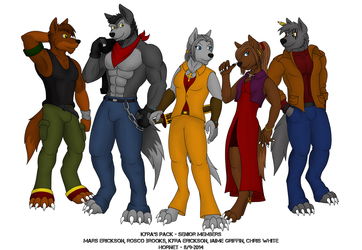 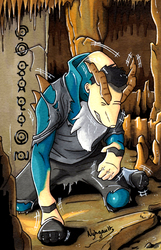 Second group pic of the members of Kyra's Pack.
I shall explain the name, have in mind this explanation applies to werewolf pack hierarchy in my story only.

A werewolf pack is separated by groups. Usually the common groups are Alpha, Delta and Omega.
The Alpha group is lead by the pack's Alpha him/herself. A pack may have 2 Alphas if they are a couple. This group includes the Betas, who are the second in command and most trusted members to the Alpha. Packs rarely have more than 2 Betas. The last in this group are the Gammas, these are senior members who are third in command of the pack. Packs usually have multiple Gamma members.
The Delta group, as the name suggests, is the following rank. These members have less time in the pack or are in lower rank related to their transformation skills. The Delta group have no specific hierarchy, other than the Delta leads.
The Omega group is the lower rank. New and young members are considered Omegas, others include pack members with low transformation skills. Omegas may also have an Omega lead, if no, they follow leadership from the Deltas.

So with that explained, let's talk about these guys, shall we?

Darius Carver
Darius Carver: A young man inspiring to be a movie director. Formerly a reporter who while trying to film some news caught himself filming werewolves in the background. Obsessed with uncover what was it, he found himself involved with Mars from Kyra's Pack and Britney from the Black Wolves. Per werewolf code, if any reporter tries to uncover them, they must be dealt with swiftly. Britney, from the Black Wolves took matters in her own hands and tried to kill him; Mars found what was happening just in time to save him, but not before he was converted. Kyra decided to take Darius in as to protect him as well as teach him, with the promise that Darius drops the intentions of uncover the werewolves to the world, which he had no choice but to agree with.

Ray Wolf
Raymond "Black Hound" Wolf: He is the younger son of Dean "Hell Hound" Wolf, founder of the Black Wolves and younger brother to Spencer "Raging Hound" Wolf. Ray is a more spiritual kind of guy compared to his brother and father, likes to appreciate nature and little things in the world. He was usually keeping his brother in check and kinda made him to be softer than his father. In a mission where his father kidnapped the daughter of a powerful senator in order to prevent exposure, the Beta of the pack turned her into a werewolf. Ray was in charge of her, during this period, Ray instead of intimidate her, showed her the beauty of being a werewolf, and eventually fell in love with her. Knowing that this could be problematic and the ways of his family will not help, Ray and her escaped. Kyra took them both in hopes that this will also ease the Black Wolves, considering the affection that Dean (which rarely showed to anyone) has towards his children.

Greg Chisholm
Gregory Chisholm: He is one of the two Delta leads along with Lloyd. Greg used to be a high school football star back in the days. He made his school team emerge from the worst team in the league to State Champions. This came at a price, the former quarterback, who always pretended to be Greg's best friend, forced a group of werewolves to kill him. Greg survived the arranged attack miraculously, and found himself changing the next full moon. The sudden change scared everyone close to him, leaving him no choice but to run away. Alone, depressed and scared, Greg tried to commit suicide multiple times before being found by Byron from the New York Pack, who thinking that Greg could do great under a good leader, referred him to Rosco. Rosco eventually found him and took him into the pack. Greg adapted easily and gained his self confidence there. He has a friendly rivalry with Lloyd and they would just try to prove superiority over the other. Greg is bisexual and has also dated Britney before she left the pack.

Lloyd Goldfrapp
Lloyd Goldfrapp: The other Delta lead and a mysterious young man who experienced his first transformation at age 18. Very late for a born werewolf. It is unsure how this happen as both him and his twin sister Shirley grew in an orphanage. Always together, Lloyd was assumed dead in a freaky accident where he suffered severe blunt head trauma, this accident was the cause he began changing. He has high control of his werewolf skills, even higher than some Gammas, another unexplained phenomenon related to him. Personally, Lloyd is easy going and loves music, Rock is his preferred and he a skilled guitar player and drummer, he is also a skilled bartender. He has a friendly rivalry with Greg, and while Greg beats him in strength competitions, Lloyd is more for skill.

Riley Levesque
Riley Levesque: A young woman who is devoted to help those in need. Her age is unknown, other than she survived the attack on Pearl Harbor in 1941. She has magnificent nursing skills and knows her way around to give first aid with anything she has available. It is assumed she became a werewolf during WWII when she in one of those incidents treated one and became infected with the werewolf's blood. She moved to England after Pearl Harbor when she eventually met Kyra and her pack. Riley was embraced as a new member and became a vital member whenever the pack was attacked. She carries a charm bracelet on her belt, according to her, it was given to her by the only man who ever loved her.

Keith Douglas
Keith Douglas: A young man with a thirst for fighting. Little is known about his past or how he became a werewolf, assuming he was turned when bitten in the hands as he always covers them with either gloves or bandages. He joined the pack after meeting Charlie, who he sees as a little brother and is assumed is identical to someone from his past. Keith is skilled in martial arts as he has traveled around the world learning from different cultures. No other pack member can defeat him in clean combat, and has also taught other members about fighting and meditation.

Now that you met again the Deltas, the next submission will be the Omegas: Brian, Monica, Matt, Charlie and I'll introduce a new character! Stay tuned.