And that's about it.

I'm sorry, but this profile is still a little unfinished. It's been an hour since I made this account and it's very late already. I will finish this tomorrow.

You can also find me at 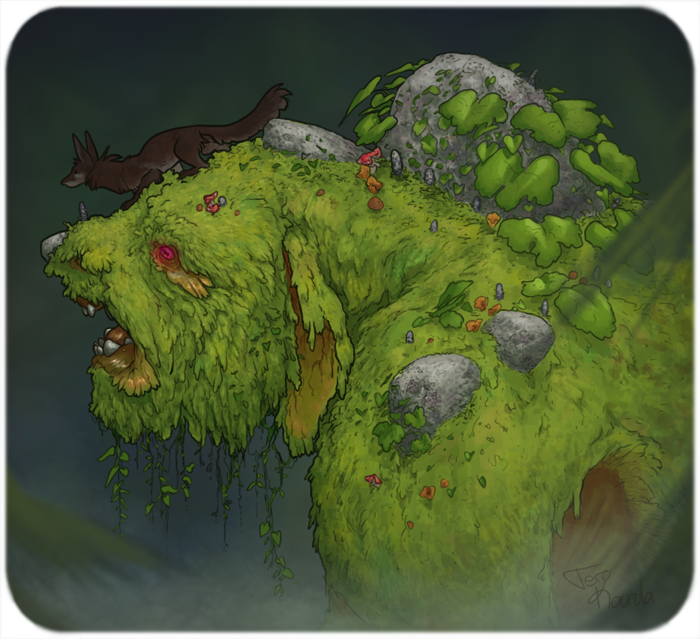 Getting to know me

Hello, Weasyl! I've come here from the cold North to see whether the site truly is as exciting as people have been saying and thus far, it seems pretty neat and clean. I also like having big banners for our profile pages, that's a nice touch I will surely abuse more in the future. B)

But yes! I've seen almost everyone (that I know, at least) do one of these so it seems like this is the thing to do here, so I shall fill one, too! c:

What's your real name?
Nina. Bc I'll get to change it in a year to Tero which I've kinda gone with for the past six years already

What's your eye color?
Gray, with every other color half-assedly splashed in

Are you single, taken or undecided?
Taken

What do you do in your spare time?
Draw, paint, play with/read to my son, spend copious amounts of time bothering my partner

What's your job or occupation?
At the moment I'm a stay-at-home parent(on paid parental leave), but will be trying for a spot in the university in either art- or astrophysics. If I won't get in, I'll be spamming all book publishers that need illustrators with my resume because I want work and money. >8I

What do you like about yourself?
Ehh... Well, I'm hard-working, loyal and determined?

What do you dislike about yourself?
Well, I have no self-esteem, have social anxiety and I feel embarrassed about my weight because I was so slim before I got pregnant. ;_; I managed to drop a few kilos last summer by exercising some 2h every single day but they came right back when it got too cold to go out. Yes, -20ºC is too cold.

What did your friends notice about you when they first met you?
I really don't know. That I'm like super awkward and don't like to talk?

What is your belief/religion if you believe in anything at all?
No, I'm an agnostic atheist.

Do you drink?
No. I drink maybe one cider per year and that's it.

Do you smoke?
Hell no.

What are your major fears?
I have tanatophobia, which is an irrational fear of death. It's weird because I know that it's inevitable and that when the time comes, I'm most probably ready to go but I still get panic attacks when I think about dying.

Have you ever had a crush or an ex?
I did date three guys when I was still a teen but two of them weren't too serious about it and we kinda forgot about it and one ended up just wanting sex... whilst I didn't. :I He could've killed a whale with that thing and I'm not fond of pain.

Do you have any dreams or goals?
To one day be an illustrator and an author

Who's your best buddy?
That's a hard question and I don't know if I can choose between people at all.

What's your favorite drink?
Pepsi. :I

If you had a super power, what would it be?
I'd go with the cliche and want to be able to fly because I yearn to fly. I mean, if I'll ever have the money to, I would totally want to buy a small plane for myself so I could take it to the sky. ;_;

What's your least favorite food?
Cabbage- and liver boxes, I was forced to eat them as a child and now just the smell makes me nearly vomit.

What's the last meal you want before you die?
Sautéed reindeer, please~♥

What do you drive and what would you really like to drive?
I drive a Tunturi Tx500 hybrid bicycle I named Joukahainen, and he's always been enough for me. Although I'd love to drive a large motorcycle, biking brings me more joy than almost any other activity I can think of.

What is your most disliked bug?
Fucking ticks, man. Those things bring nothing but trouble to everything that doesn't eat them.

Pet peeves?
Loud eating noises
When people walk in the bike lane and won't give you room to pass them
People doing things in an illogical way frustrates me beyond belief and I can't understand why
People trying to talk to me when I have my headphones on. Guys, when the phones are on, I canNOT hear you!
Mom ALWAYS eating shit loudly when I call her. EVERY SINGLE TIME!!! MJAM MJAM SCHLURP
When people say "you know" at least ten times within a single sentence

What do you love in life?
Dude, I love almost everything. I might seem a bit depressive at times and don't really tell people much about what I like but I find it hard not to like things. What I love most in life is, after my family, discovering things, science, space and art, everything else is slightly less awesome but awesome nevertheless.
I cry watching both nature- and science documentaries, I just
it's so awesome and beautiful ;__;

What do you dislike in life?
Being poor and not really having much control over this fact. I know it's because the economy's shit and most bosses are busy firing people to keep themselves from going bankrupt but it won't help with the fact that I do get a LOT of shit for not having a job, even though I'm on a paid leave. :I If only people understood that I'm not just sitting around doing nothing all day long, I've been incredibly busy developing my skills for the past three years because I want to go to the university and I want a job in either the field of science or art, or maybe both. I would love to be able to have a job dealing with both. c:
Also the social office, the people working there are absolutely the most disgusting people on earth.