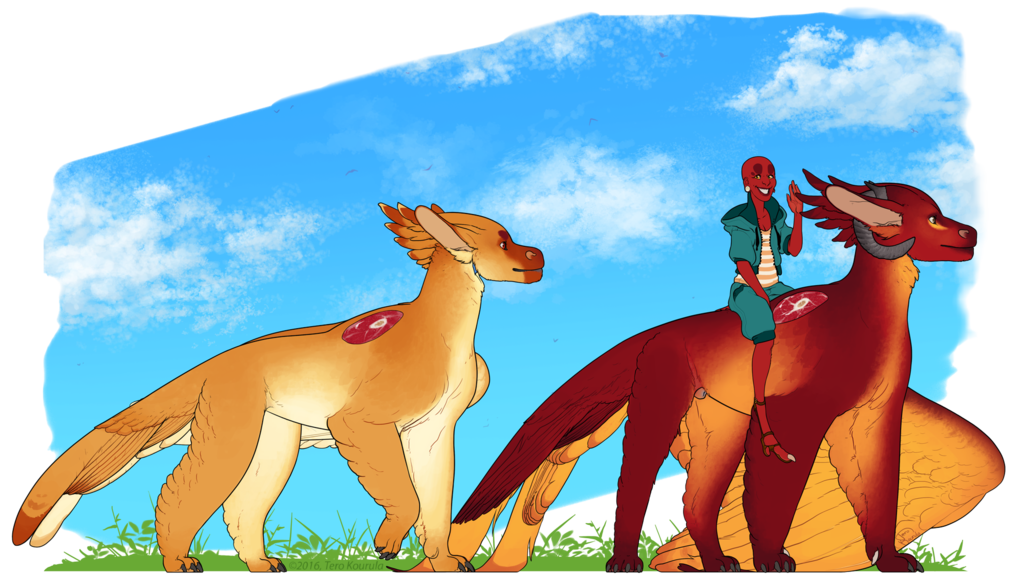 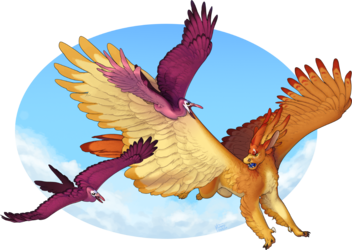 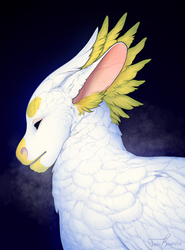 I’ve began working on a species sheet for shiro, and came to the conclusion that doing it in pieces would be best. More frequent updates, less strain for the pc, everybody wins.

Shiro are large domestic omnivores raised as prestigious pets by the wealthiest of kiiru*. Not only are they a sought-after status symbol for their vibrant feathers and graceful demeanor, but their gentle nature makes them excellent pets as well. For millenia they’ve been bred to be highly social and loyal to their families as well as patient and nurturing, and it is tradition to give a shiro pup to a newborn or a young child, to serve as their guardian and companion.

Though they may look robust, under their thick feathery coats shiro are surprisingly slender. Though long-limbed, they’re relatively slow runners but can run for several hours if necessary. Their front paws have large thumbs with strong claws that were once used for grabbing prey, but whose purpose is now mainly aesthetic. Similarly, their horns are purely aesthetic and are actually hollow and quite fragile. It’s not uncommon to see males with broken or even missing horns.

As for their feathers: Shiro use both their crests and tails for communication, posing one or both to signal emotion and/or intent. Showcasing tail feathers is common during courtship rituals.

Shiro are quite vocal, too. Most of their sounds consist of different woops that somewhat resemble those of a zebra, as well as whistles and (mainly puppies)chirps. Shiro call is a long and clear howl.

There will be more detailed information in future pieces. c:

* formerly called “kiro”, but the name was just way too close to “shiro”.