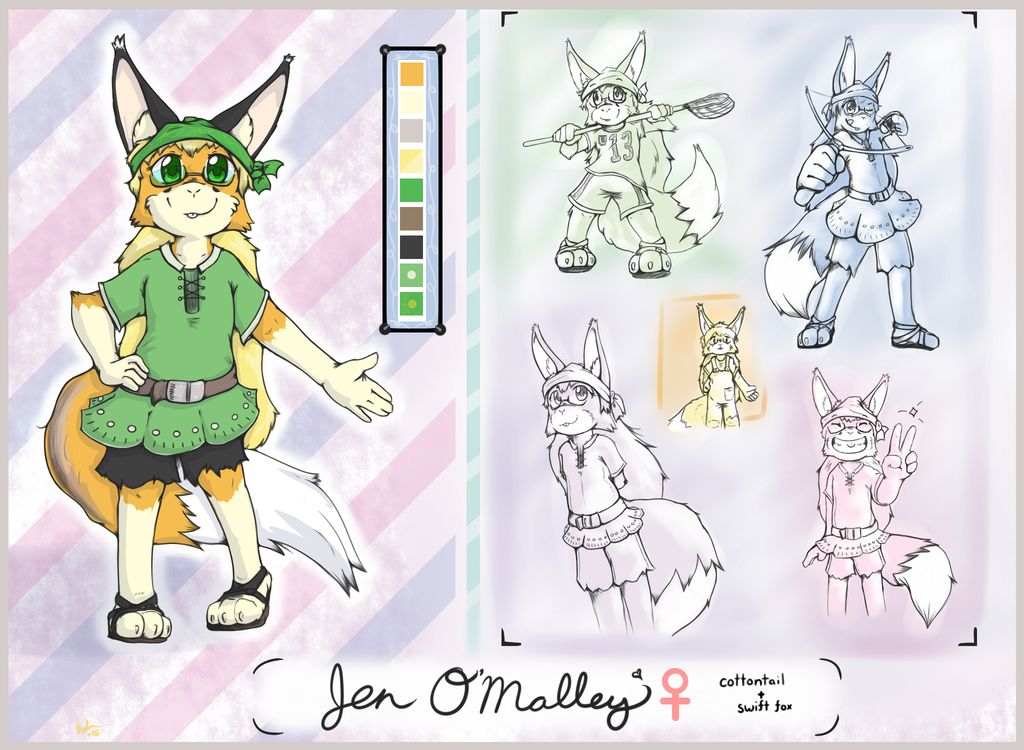 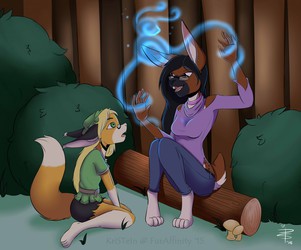 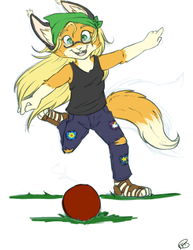 Introducing Jen O'Malley. Half fox, half rabbit, all adorable mischief, she's the young daughter of Fiachra O'Malley and Grace the Golden Furred and the product of a collaboration between myself and avatar?user=213964&character=0&clevel=2 MeganBryar

Jen is a young rabbit/fox hybrid, or "lagovulpe" as she prefers to be called, who lives on the island of Viridis. She fancies herself an adventurer, following in her parents' footsteps, though she has yet to go on what she considers a proper adventure. She's a tomboy to the bone, and has a strong sense of mischief, but she's basically a good kid at heart.

Her name is just Jen. Not Jenny, not Jennifer, just Jen.

Personality:
She is an adventurous, rough-and-tumble tomboy. She's a sweet kid and a self-proclaimed champion of the downtrodden, though she has a tendency to overdo it with the bravado. She is self-conscious about her status as a hybrid and tries a little too hard to prove herself. Being half rabbit and half fox, she often has to deal with wildly conflicting instincts which can make her somewhat moody and withdrawn at times, but it rarely takes long for her to recover her equilibrium. When she's happy, she can be quite gregarious and she enjoys attending the seasonal markets held in Oseille, which bring her into contact with travelers from all over the island, and beyond.

Background:
Jen is the daughter of Fiachra O'Malley, a gender-shifting rabbit from the Island of Viridis, and Queen regnant of the city-state of Oseille, and Queen Grace XIII the Golden Furred of a lost vulpine kingdom far across the ocean. She currently lives with Fiachra in Oseille while Grace wanders the world in hopes of finding a way to break the curse that prevents her from leading an ordinary life. Grace visits her daughter as often as she can, however, and Fiachra does her best to teach Jen everything she needs to know as a scion of both kingdoms. Jen misses her mother during Grace's long absences, but for the most part she is a fairly happy girl and her half-sisters and cousins do their best to keep her occupied and entertained. She is a keen explorer and she often spends her days wandering happily through the forests that surround Oseille on all sides. Curiously, even the bandits and outlaws that still plague the wilder parts of Viridis seem reluctant to harass her. Though this is likely because they know who her parents are and what Fiachra will do to them if they harm her.

Jen is officially a princess. However, the royal families of both kingdoms are far from the pampered layabouts that people might expect them to be. They are expected to take their roles as the heads of government quite seriously and to see to the prosperity of their kingdoms in times of peace and to defend their people by taking up arms in times of war. As such, Jen's parents have done their best to instill in her a sense of responsibility and, perhaps more importantly, a measure of compassion for everyone, regardless of rank or station.

Talents:
-Being half swift fox and half rabbit, Jen is a very swift runner. If she really tries, she can outrun even adult swift foxes for brief distances. She has slightly more endurance than her vulpine ancestors, but running flat out will tire her quickly.

-She has an ear for languages and she is fluent in a total of five different languages, including her parents' native tongues.

-She's deadly with any ranged weapon she can get her hands on, though her parents forbade her to use bows without supervision after the "incident".

Quirks:
-Hugs her tail when she's upset, or sometimes when she's just concentrating on something.

-She's not overly fond of being touched. Hugs from her parents are an exception, but for the most part she prefers if people keep their hands to themselves. Those who don't risk being bitten.

-She appears to have inherited Fiachra's distaste for carrots.

-Like her lapine ancestors, she has the instinct to continually chew on things to keep her incisors from growing too long. She finds this deeply embarrassing and she will never knowingly do this in public, though sometimes she can forget herself.