Sharing a Laugh by Ghostbear 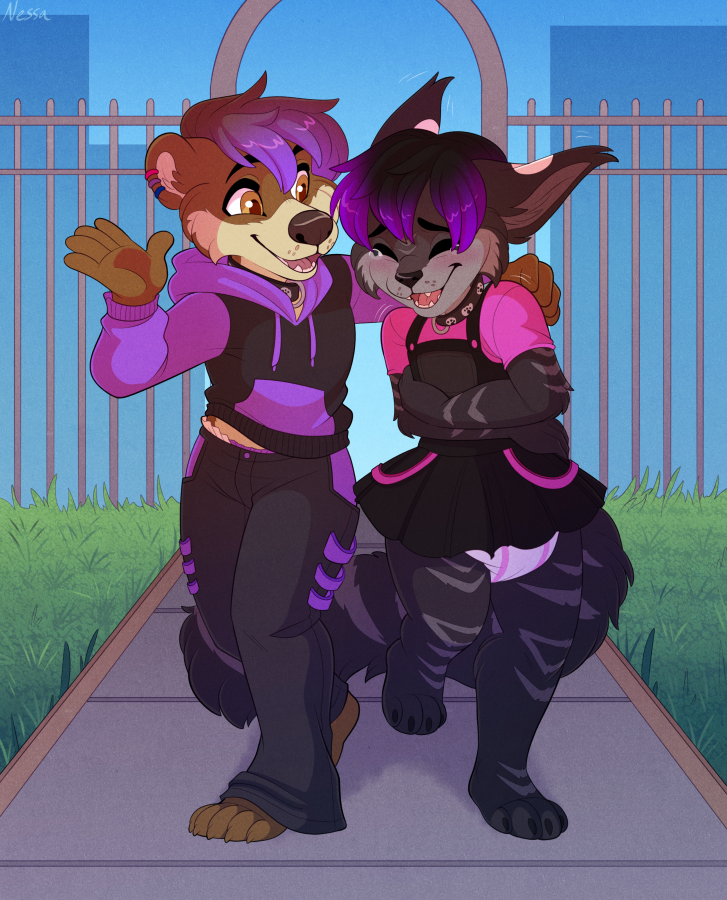 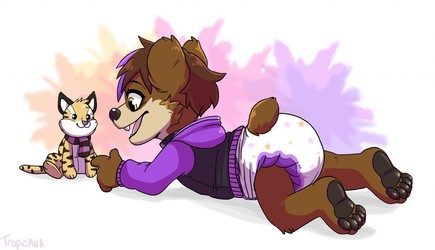 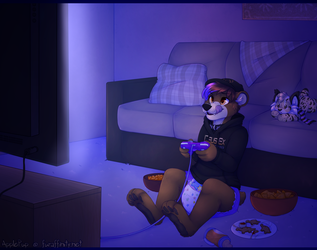 "And then..."
Sascha had his arm curled around his brother Kuraiko's shoulders and was waving around with his free hand, while he was telling his story.
The weather had been picking up during the last couple of days and spring had finally won over the cold and clammy days. The two unequal siblings had gone for a little stroll in the park, near their parent's house, enjoying the day.
While the little bear hybrid had settled for his signature hoodie and cargo pants, the tiger hybrid had chosen a different outfit.
Being a little on the innocent girly side, he had selected a brightly hot pink shirt and some adorable skirtalls in black and hot pink.
Sascha didn't mind his brother's unusual choice of clothing, he took delight in Kuraiko's happiness.
"What happened then? Don't keep me in suspense!"
"Woah there, Tiger ... slow down"
The little ursine took a deep breath before he continued.
"Then he was so confused, that he took a bite from the cake. Totally forgetting that he wasn't holding a real cake in his paws... but only a sand pie.
He was spattering and coughing, spitting wet sand EVERYWHERE!"
"He...hihi..he did not!"
"Oh he totally did!"
"GNIHIHIHIH...BWAHAHA!!"
Right beside him, Kuraiko was thrown into a fit of laughs and giggles while he visualized the absurd situation in front of his mental eyes.
Unable to speak he was just giggling and staggering along, holding his belly with both hands.
It was hard for Sascha to keep a straight face and he didn't manage it for long, before he broke into a broad grin himself.

An adorable picture that I commission from the highly talented

sbneko as pick-me-up gift for my little brother kuraiko, who went through a bit rough patch lately.
I hope it cheered him up a little.
She really nailed down the expressions, the poses and clothing. And Kuraiko looks so cute while he is laughing his tail off.
And who can be mad with those two little rascals and their stories.

Thank you so very much, Nessa for the awesome picture! I really love it!