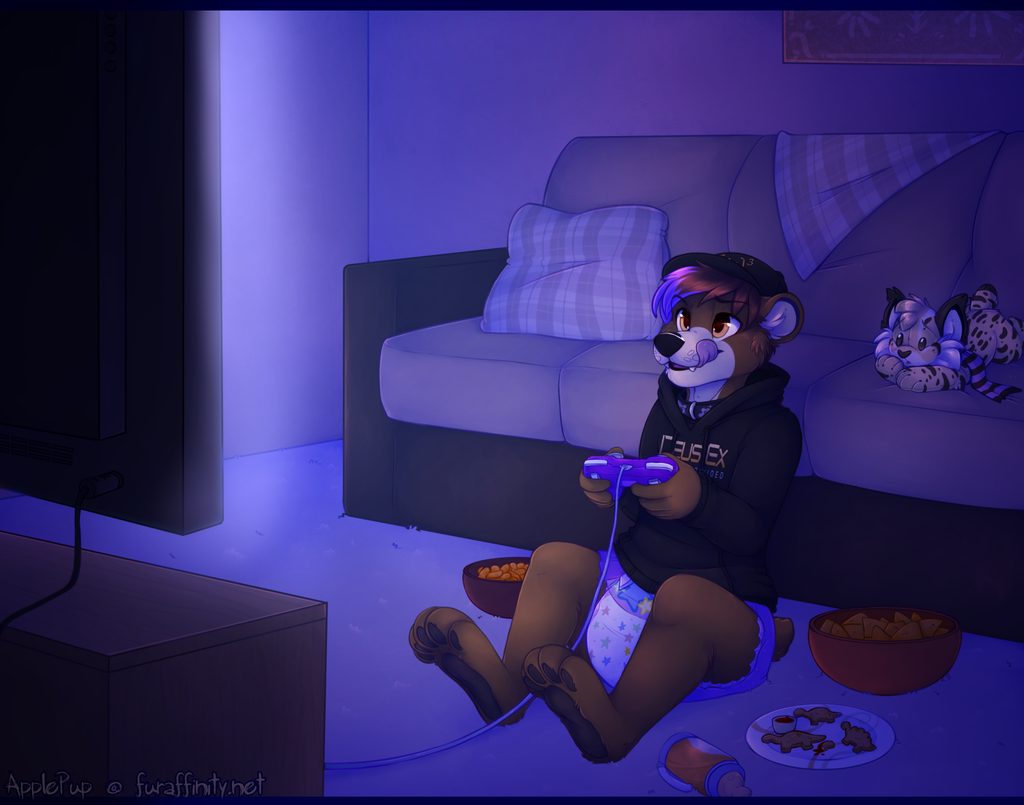 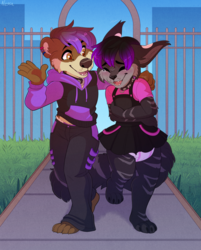 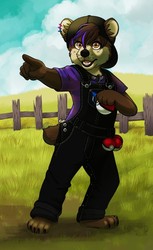 The female snowleopard walk up to her adoptive son, who was standing in front of her and smiled at him. His dad was already waiting in the hallway.
"So, we will be going now, Sascha and will be back tomorrow at noon after we collected your brother from his sleepover. If there's anything wrong you can call us and we will be back in a matter of minutes. Just as we talked about. And be good, okay?"
"Yeah, okay. Nu problem." The little bear hybrid smiled back at his mum, then lifted up the lynx plushie, he had been cradling in his arms. "And Sammy will watch out for me"
Nodding eagerly, he let the plushie nod in agreement as well.
"Good." His mum ruffled Sascha's hair and giving him a kiss on the cheek, provoking a little 'hmrpf' from the ursine, as he straightend the bright purple streak of hair. "And don't stay up to late, will you!"
"Yes mum, I'm not a little baby anymore!" He puffed up his chest. "Byyyyye!"
"Bye Sascha"
As the snowleopard walked out of the room, joining her husband in the hallway and finally getting to leave...they heard a young voice calling "Waaaaaaaiiit!" before they could even leave the apartment.
A brown, purple and very crinkly flash of fluffy fur dashed into the hallway, before crashing into his dad, snuggling into the sand-colored fur. The lynx smiled, hugged his son close, before Sascha let go and snuggled into his mum's fur as well, purring softly.
Finally satisfied Sascha waved goodbye .. then he was alone with Sammy.
"Let's go! I'm hungry. And thirsty! And then we go play!"
The little bear walked into the kitchen. Or maybe 'waddled' would be the better word for it, as he had insisted to get dressed into a comfy hoody with a Deus Ex Logo, a fitting basecap with the Transhumanism logo sewed on (not that he would knew what it meant) ... and the thickest nighttime diaper his parent's had available for him.
When he arrived he quickly got to work and prepared a healthy, balanced meal. For a cub.
Waddling back into the living room, he carefully set down the bowls and plate, nodding in agreement.
Cheetos, Tortilla chip, dino nuggets and a healthy amount of ketchup. All topped off by a sweet juice he had filled into his sippy cup.
He placed Sammy on the sofa, flopped down on the soft carpet... then booted up his dad's video game console, while stuffing his face with the fatty, salty treats
Technically he wasn't supposed to the play the game he then selected, but Sascha didn't really care. And he seemed to handle those games pretty well, even if the were far from being age appropriate.
It didn't take long for him to get fully immersed into the game... hacking computers, trying to sneak into the enemy base, little tongue sticking out in concentration.
Of course he got caught a lot of times and those errors weren't pretty.
Judging from Sammy's worry look and that he tried to hide behind his own paws a couple of times ... there really were not. ^.^''

Late night gaming, unhealthy but tasty snack, sweet juice and a faithful, if frightened, plushie companion.
What better for a little gaming boy like Sascha to spend an evening alone.
Let's hope he doesn't get into to much trouble, should his parents find out ^.^'

A wonderful, funny, detailed and totally adorbs commission, drawn by the highly talented   applepup
Thank you very much, buddy! I really love the little details and the awesome lighting. :3
Thankies!