What a Gut Demands, a Gut Gets...! - by Geckomania by Charem 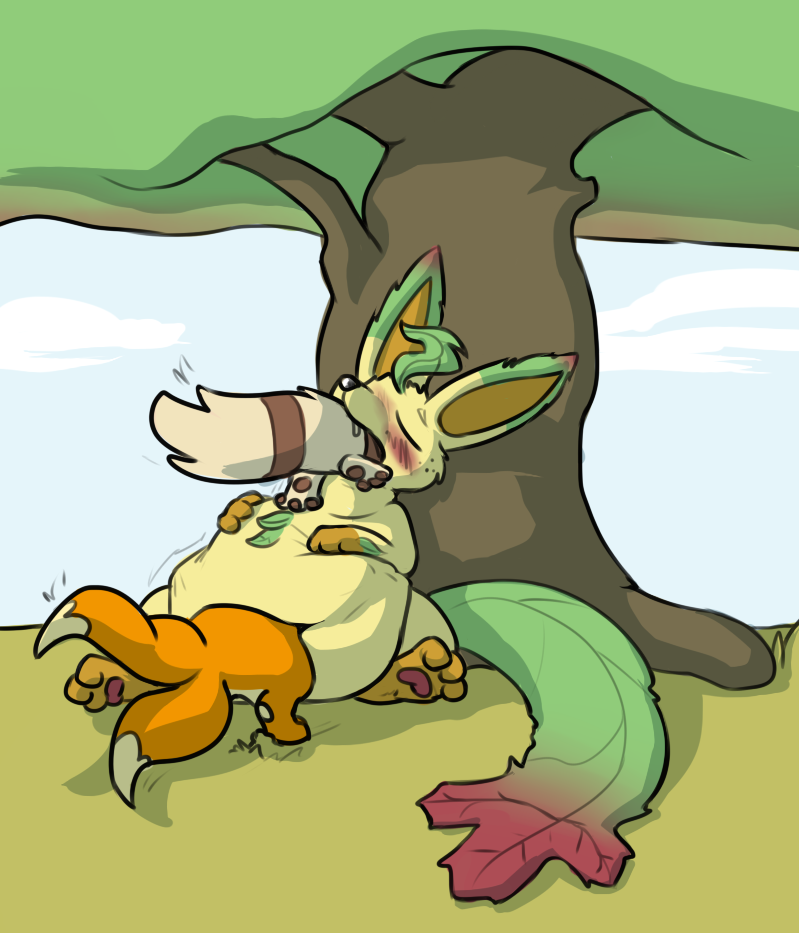 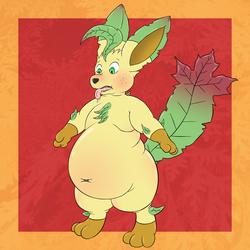 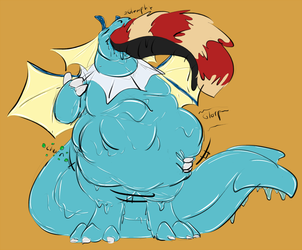 What a Gut Demands, a Gut Gets...! - by Geckomania

(Like my last story for Aspen the Leafeon, the 'Part 2' story for this picture ended up being quite detailed. So once again, I decided to upload this tale on the more story-friendly SoFurry; it's located right here: https://www.sofurry.com/view/1026811 ! So go read it! :D It involves feeding, fattening, vore, digestion, and drama and peril too~)

Time for another tl;dr for those who don't like reading stories! (I really do recommend reading at the SoFurry link above though, it's far more fun that way~)

I already introduced Aspen the Leafeon in my last submissions. To recap, he used to be a human hiker, always going on nature-adventures with his trusty companion Twig the Deerling. One such trip ended up disastrous though; a strange new plant snared the human, feeding him full of strange, sweet sap... This both fattened and changed him, turning him into the tubby Leafeon he is now! Fortunately Twig interrupted the plant's efforts before it could change the human all the way, leaving the Leafy with a few of his human traits, such as the ability to stand on two paws, and most vitally leaving him with his human mind.

However, Aspen still has a lot to deal with... Some of that sap just won't digest, and the way it sloshes and burbles has left him feeling utterly starved unless he eats a fair ton of food in a sitting. Feral instincts kick up when this happens...and he'd already tried to pounce Twig once in a fit of hunger! The ex-human knows he has to manage himself better...

In this 'Part 2' story, the Leafeon busies himself with a day of fishing and trapping. Figuring his feral fits of feeding to be a simple metabolic change, and something that would level out soon enough, he deduces that he should just keep himself well-fed until things settle down inside him. A rather productive fishing trip ensues, with enough fish Pokemon caught to feed three people easily! Like a civilized creature, he debones and cooks up his meal...before sliding it all into his gullet with nary a bite. Well - that would keep him full, right?...

Alas, the Leafeon still has to check his trap. Perhaps some food for the next day, he figured...if he even caught anything at all. To his surprise however, Aspen learns he'd caught TWO creatures in the single trap: a Buizel, and a Furret. The two snared Pokes try to reason with the Leafeon to let them out...but the ex-human soon feels his hunger swell up again... He let them out, alright...only to cram the Furret down a wet new 'trap', and smooshing the Buizel against his groaning gut to keep the otter from escaping! But a bit too much pushing resulted from there...with the starving grass-type quickly learning that his navel was just another way to cram something into his belly...!

Simply put, the two Pokemon quickly collected into the Leafeon's engorged gut, the finally-sated leaf-Poke dozing off against a tree...as his belly busily worked at the meals within it, softening Aspen's frame with more flab...

Twig was unaware of the hungry extent that his companion had gone...but seeing that the Leafeon did not return to camp quickly, the deer grew worried, and clopped off to look for him. It didn't take long for the Deerling to find his friend, fatter than ever, and with an empty trap next to him...

But that sap-coated Leafeon belly was never really full, was it?... What would Twig's fate be, now that he...knew? There's more to this tale, but to find out, you'll have to tune in to the full story at the above link~ ;3

Story-writing can consume more time than Aspen can consume Pokemon, I swear. >w< But heck, this tale got REALLY good, so it pays off in the end. Sorry for the posting delay, guys! Future stories involving Aspen will be shorter, sharing tidbits of his life here and there. The reason this and my previous submission's story were so long was because they were introduction stories, two halves of a whole~

Anyways! This lovely image was drawn up by   geckomania, who I now decree is capable of drawing the cutest Leafeons possible. I mean, just look at Aster here, d'aww! Those little pawsies! Maybe he'd be cuter if he wasn't chowing down on multiple Pokemon at once for the singular goal of glooping them into more calories, but... Oh, who am I kidding? That'll just make him fatter! Which makes him cuter yet! :D But yes - Gecko did a fantastic job on this commission, and even tossed in an extra character for free in the form of that Furret. (He likes Furrets a lot. Even when they're just fooood~)

Though Aspen has been the focal-point of the art of him I've gotten, I have to give some of the spotlight to Twig the Deerling. Even though Twig's never been in a piece of art (something I must change soon), his personality in the stories I've written is simply delightful. Aspen would've been turned into a full, completely-inhuman Leafeon had his deer-friend not interrupted the process, and Twig proves to be fantastic moral support as Aspen learns to cope with things. The Deerling is a rambunctious fellow too, not 'skittish' or 'graceful' or anything you'd expect from a deer. He's kind of an ass too sometimes, but heck, he's a tried and true friend to his owner-turned-Pokemon through and through! (Again, read the stories if you haven't! Twig totally shines in them.)

So you guys were really communicate last images, I loved it! So I'm gonna ask again: Land me some comments! What do you think of the story? Thoughts on Aspen, Twig? Anything you'd like to see either of them do in future art/stories?

How do you feel about Aspen gurgling away anything he stomachs, too? I know not everybody's into digestion, but in truth, he is rather helpless to that sap controlling his cravings. Think he should fight it...or just give into it, so long as he doesn't eat anybody...important? ;3 How should be manage this vice, in your eyes?