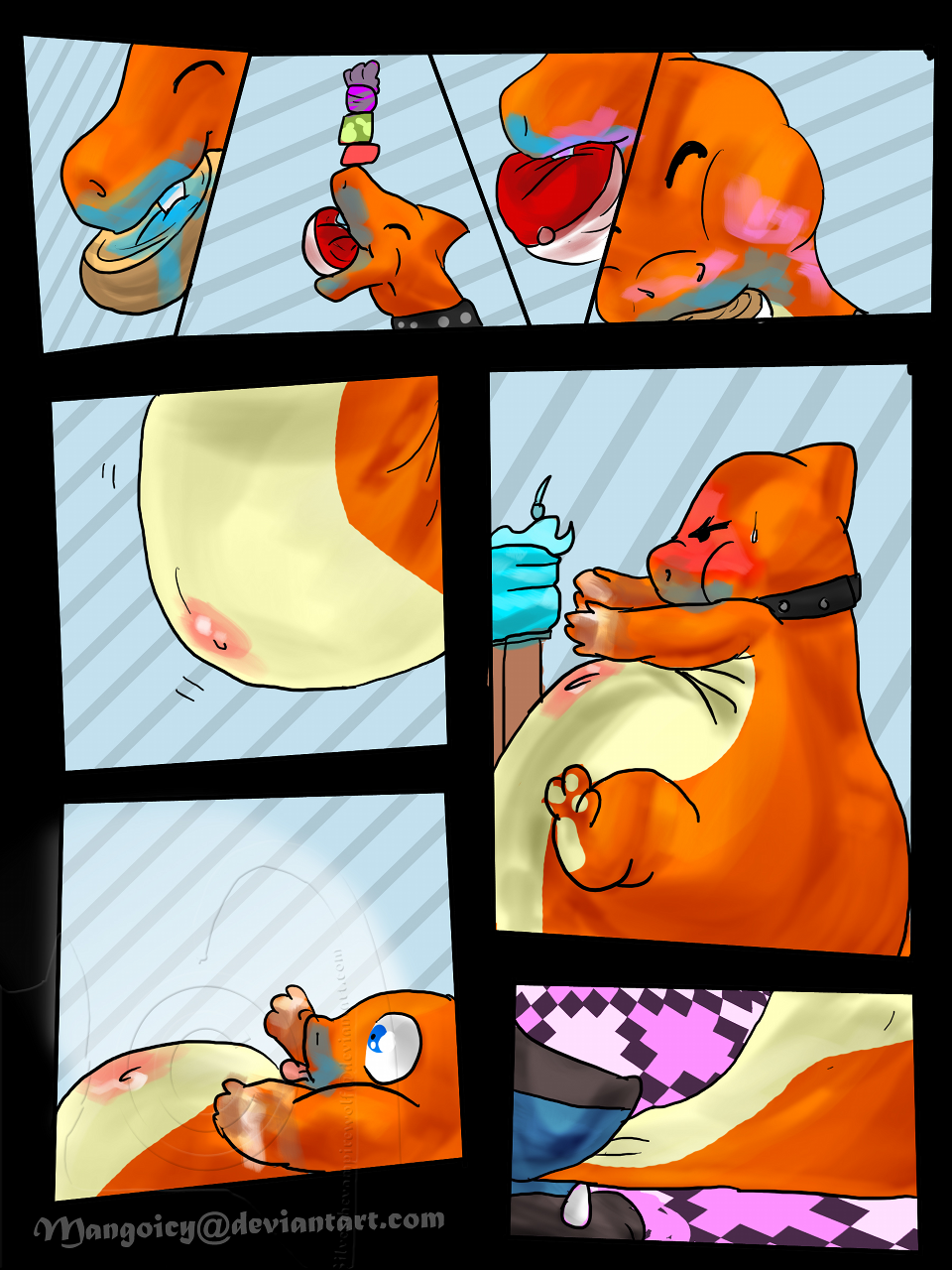 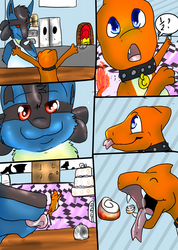 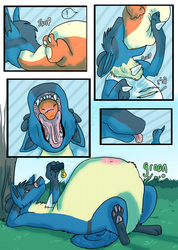 The rush of sugar simply oozed through Charem's body as he ate, sparking even more excitement and earnest from him as he om'd and nom'd about! Cakes, cupcakes, donuts, poffins, gummis, chocolates, marshmallows, caramels, candies... Nothing was forgotten by the giant sweet tooth and hunger that the Charmeleon sported! Barely any moments were had where his mouth was full with something, and where something wasn't sliding on down his drool-coated throat! His face and paws was quickly coated in colorful icings and syrups, messy eater as he was - but of course, he hardly minded this!

As he continued his meal, and still full of sugary energy, the lizard began to get creative. Tipping an entire tray of foods and catching them in my wide-open maw before they could hit the floor, balancing a stack of candies atop his nose before jutting it up and sending the candies down into his jaws. The Charmeleon wasn't usually this dexterous, but when it came to food, he wouldn't miss a thing!

Charem's gut plumpened quite quickly, along with the rest of his form, and his roundness and heaviness eventually starting to take a toll on his mobility. Still, he drug himself like a champ from display case to display case, until his fat little legs could do no more to move him. Struggling, he sat up and rocked, attempting to reach a blue cake just out of his chubby paws' grasp... He didn't even mind that he was sitting on his thickened tail in his awkward position, the appendage simply swish-swishing happily along the floor.

The Charmeleon's focus was so intent that he failed to notice as Hungry Lucario stepped from behind the counter and approached him, the shopkeeper lapping at his own drooling lips as he sized up the round and plumpened lizard. "I think it's time that I get my end of the deal now, 'little' friend." stated the Lucario simply, the jackal-like Pokemon going down on all fours just in front of the reptile's tail. "You've certainly made it quite a filling deal, at that...!"

"Mrrh?" Charem rowrbled in curiosity, his attention still mostly on that tempting cake in front of him... Well, until that attention was quite rudely broken as the Charmeleon was FORCED to fall backwards onto the ground, a firm, slimy tug felt on his tail! Sitting up a bit again and trying to look around his own girth, the lizard gasped as he saw the Lucario's jaws had ensnared his tailend, the flaming tip apparently of no concern to the shopkeep. Another pull and a gulp was made, flattening the overstuffed reptile's back completely onto the floor as he could feel the Lucario's tongue lapping and tasting around that thick tail, while swallowing further and further up it...

"W-w-wait! This wasn't part of the deal!" the Charmeleon scrambled about, unable to do much of anything but wriggle his limbs.

"Mmh...this was exactly the deal. You fatten yourself up for me, and then I eat you. You just didn't ask for the details..." HL smoothly replied around the tail in his jaws, before resuming his slow, savoring swallows!

This is the third of a 4-part comic, drawn by   Mangoicy back when she was exclusively on DA. :3~ Mangoicy seemed to have a lot of fun with this comic, and it turned out pretty fun as well! <3 It was probably the best points commission deal I've ever done, for that matter. The comic also was a gift to   angrytoad, aka Hungry Lucario, who plays the shopkeeper in this little story. n..n