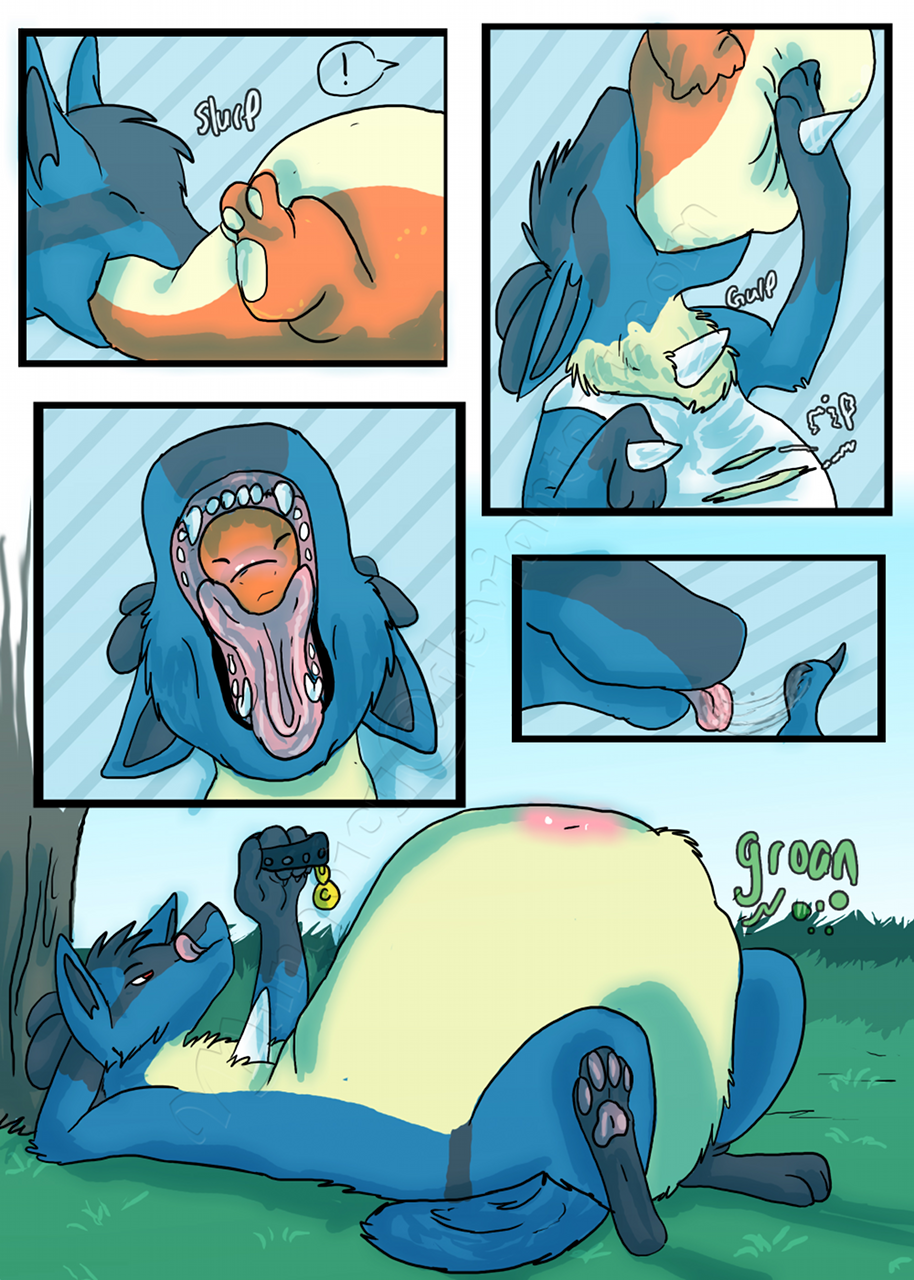 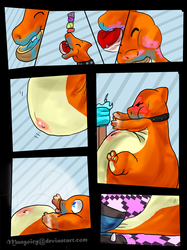 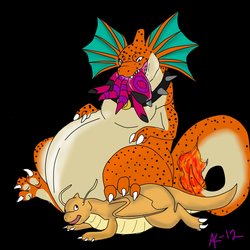 The rush of sugar simply oozed through Charem's body as he ate, sparking even more excitement and earnest from him as he om'd and nom'd about! Cakes, cupcakes, donuts, poffins, gummis, chocolates, marshmallows, caramels, candies... Nothing was forgotten by the giant sweet tooth and hunger that the Charmeleon sported! Barely any moments were had where his mouth was full with something, and where something wasn't sliding on down his drool-coated throat! His face and paws was quickly coated in colorful icings and syrups, messy eater as he was - but of course, he hardly minded this!

As he continued his meal, and still full of sugary energy, the lizard began to get creative. Tipping an entire tray of foods and catching them in my wide-open maw before they could hit the floor, balancing a stack of candies atop his nose before jutting it up and sending the candies down into his jaws. The Charmeleon wasn't usually this dexterous, but when it came to food, he wouldn't miss a thing!

Charem's gut plumpened quite quickly, along with the rest of his form, and his roundness and heaviness eventually starting to take a toll on his mobility. Still, he drug himself like a champ from display case to display case, until his fat little legs could do no more to move him. Struggling, he sat up and rocked, attempting to reach a blue cake just out of his chubby paws' grasp... He didn't even mind that he was sitting on his thickened tail in his awkward position, the appendage simply swish-swishing happily along the floor.

The Charmeleon's focus was so intent that he failed to notice as Hungry Lucario stepped from behind the counter and approached him, the shopkeeper lapping at his own drooling lips as he sized up the round and plumpened lizard. "I think it's time that I get my end of the deal now, 'little' friend." stated the Lucario simply, the jackal-like Pokemon going down on all fours just in front of the reptile's tail. "You've certainly made it quite a filling deal, at that...!"

"Mrrh?" Charem rowrbled in curiosity, his attention still mostly on that tempting cake in front of him... Well, until that attention was quite rudely broken as the Charmeleon was FORCED to fall backwards onto the ground, a firm, slimy tug felt on his tail! Sitting up a bit again and trying to look around his own girth, the lizard gasped as he saw the Lucario's jaws had ensnared his tailend, the flaming tip apparently of no concern to the shopkeep. Another pull and a gulp was made, flattening the overstuffed reptile's back completely onto the floor as he could feel the Lucario's tongue lapping and tasting around that thick tail, while swallowing further and further up it...

"W-w-wait! This wasn't part of the deal!" the Charmeleon scrambled about, unable to do much of anything but wriggle his limbs.

"Mmh...this was exactly the deal. You fatten yourself up for me, and then I eat you. You just didn't ask for the details..." HL smoothly replied around the tail in his jaws, before resuming his slow, savoring swallows!

HL was merely amused as the Charmeleon made numerous squeaks and merfs, vocalizing his discontent to the situation! Seeing that the lizard was too fat and immobile to do anything else, the Lucario simply ignored the protests, and continued lazily devouring his 'customer'.

Getting up the thickest part of the tail, the jackal Pokemon's jaws were finally starting to have to stretch at the girth of the reptile. Glancing up, HL focused on his next target: the Charmeleon's adorable, wriggling feetsies. Lightly, then roughly, did the Lucario lap at those padded soles while he swallowed closer to him, before snaring them past his lips with his tongue! The lizard's toes scrunched against the back of his tongue in response, merely delivering more of the reptile's meaty flavor to his taste buds!

Hungry Lucario grunted as his jaws continued to stretch and part, MUCH further than they normally ever did, as his mouth climbed over Charem's giant belly. Still, the shopkeeper was determined in consuming his fatty lunch, and clutched his paws against the sides of that scaly gut, pulling it down and into his snout! The Charmeleon's weight was thankfully very plush and pliable, and the Lucario found that he could gain ground one belly-roll at a time, squishing section after calorie-filled section of the cream-colored meal into his mouth. The taste of it all was simply divine! Sweet, greasy, smooth, steak-like and spicy; these were the sugar-infused lizard's irresistible flavors, a surprisingly-perfect mix of tastes!

Growling in delight, HL clutched the upper half of the Char-snack and carefully got to his feet, lifting his customer above his head with a single paw for support. Now assisted by gravity, the Lucario simply gaped open his jaws and allowed the scaly Pokemon to slowly descend, the jackal spending most of his energy just lapping in-between each of those rolls of fat, slurping over every inch of scale he could reach, and rumbling a deep, guttural purr of approval! Soon, the sound of ripping could be heard as the shopkeeper's apron broke apart, the Lucario's belly starting to grow simply too large to contain it! HL merely chuckled in response...he had extras, after all!

In what seemed like too short a time, the Charmelon's belly was fully crammed into the Lucario's bulging throat - and thus, the hardest part of HL's consumption was over. He smiled wide as his now quite-well-stretched jaws had no trouble accepting the lizard's chest and arms, the orange Pokemon barely struggling by now.

With only his head outside the jackal Poke's jaws, and his lower-half already collecting inside the Lucario's gut. Charem made a final plea. "W-wait! If you let me go, I can bring back money and pay for everything that I ate!"

HL paused for a moment, chuckling from around the Charmeleon's neck, before making another firm swallow and pulling the reptile's head into his mouth. "You probably could, I imagine. But then, money doesn't taste as good as you do, now does it?" the jackal pointed out, rolling his tongue along Charem's chin as the lizard winced.

"I...n-no I guess it doesn't, bu...mmph!" the Charmeleon found himself silenced as the Lucario made another, final swallow, sinking his head sloooowly into the jackal's throat... HL merely yawned his maw apart, letting the Fire-type have one last good look at the outside world before he was fully encased in the shopkeeper's gullet. The slimy interior pulsed and pulled at the overweight Char, causing him to blush as he was quickly crammed inside the Lucario's wet belly...

The sated Lucario smiled to himself, letting out an unashamed belch before wiping the last bit of drool from his tongue with a finger. This had been quite a successful day for his pastry shop, though certainly not in the traditional sense... And it was time to call it a day.

Carefully bending down over his engorged, wriggling belly, HL picked the ripped-up apron and tossed it into a nearby trash bin. Waddling behind the counter for a moment, he snatched up his shop key, then headed for the front door. Every moment was difficult for the Lucario, but the fullness and feeling of his belly swaying heavily about more than made up for it! A quick turn of the 'Open' sign to the 'Closed' position was all that was needed to close down his shop; that accomplished, the fattened jackal navigated slowly through the door, wedging his belly through the just-wide-enough door frame. Passerby in the busy mall gave the Lucario's girth more than a few stares as he locked his shop door, especially as it began to groan and gurglrumble loudly...! But the storeowner hardly minded such attention, stepping proudly from the mall and letting the populace gawk all it wanted to!

HL sighed in peaceful bliss, reclining out on the warm, sunny grass. The city's park seemed like a perfect place to rest after such a 'hard day' of work, and his belly seemed to agree, happily groaning and working on the sugary-fat meal it had been given. The Lucario patted the gurgling gut as he kicked back against a tree.

The Pokemon coughed as the FORCEFUL belch came out, spittle and drool flinging into the air, as he felt something firm come up his throat! Half-choking, he quickly reached into his maw, the Lucario's paw clasping around a drool-drenched, leathery object, which jingled as he pulled it out from his gullet. Panting to catch his breath, and licking his lips clean of the juicy burp, the jackal smiled as he saw what he had obtained.

"Hmm. Pretty nice collar." HL mumbled to himself as he wiped the Charmeleon's pet collar of the guttural fluids coating it, the metal tag looking shinier than ever.

"I think I might keep this! You don't mind, do you, little Char-meal-eon?" the Lucario teased, poking his gut. His belly, almost as if in response, let out a low groan of approval. "Hehe. I didn't think so!"

This is the fourth of a 4-part comic, drawn by :iconMangoicy: back when she was exclusively on DA. :3~ Mangoicy seemed to have a lot of fun with this comic, and it turned out pretty fun as well! <3 It was probably the best points commission deal I've ever done, for that matter. The comic also was a gift to :iconangrytoad:, aka Hungry Lucario, who plays the shopkeeper in this little story. n..n