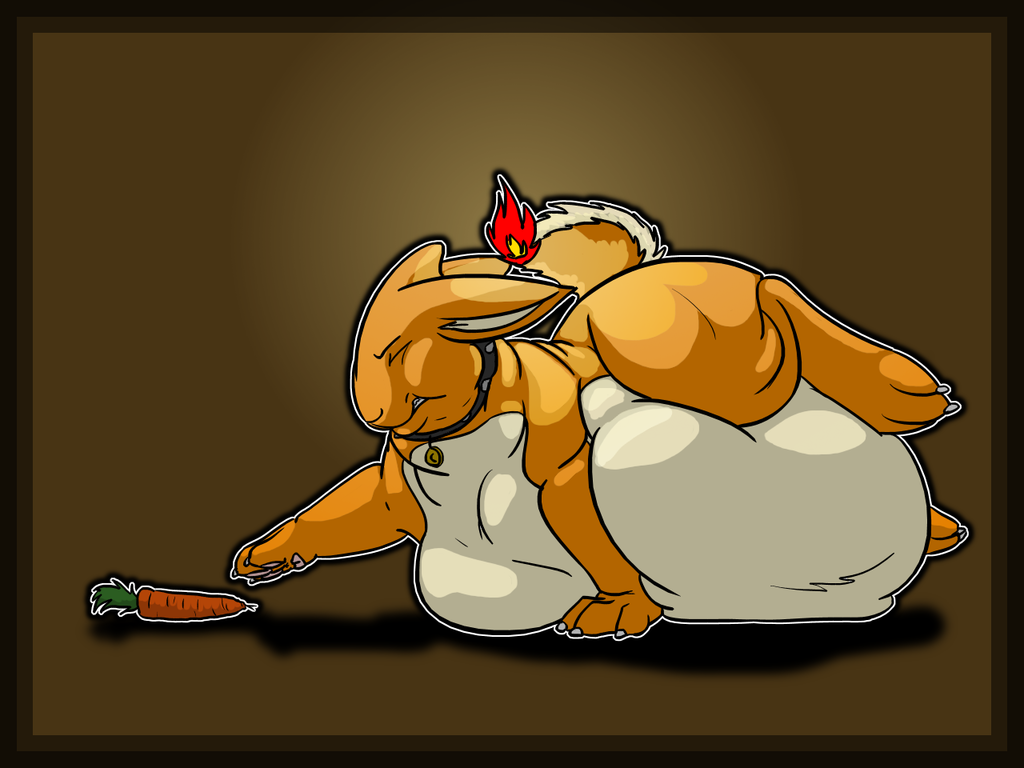 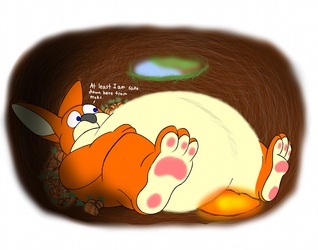 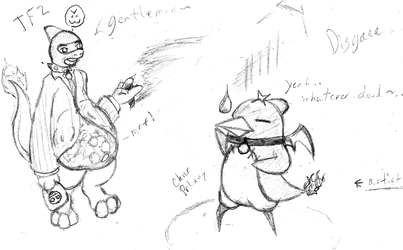 Rabbits don't really learn their lessons about what happens if you eat too many carrots. Obviously so, of course; why else would we have a whole week about fat bunnies? x3 They just can't help it, it seems - those vegetables are just -too good-! owo

Not even Charbunnies are resistant to the allure of the orange veggies of the gods! Cute and cuddly like normal bunnies, Charbunnies are notably more tenacious, and also harder to satisfy! While a great deal of 'vanilla' bunnies are sated when their bellies turn a neat roundness, Charbunnies have a much larger appetite to fill...and a lot more stubborn and fulfilling their goals!

Take, for instance, the Charbunny known as Charem. His belly, undoubtedly crammed full with carrots - and, thanks to his unusually-omnivorous nature, perhaps OTHER things - still drags his flabby bunny-butt over to one final carrot. That huge, blubbery, and fuzzy-soft gut weighs more than 4 times his normal weight, and drags quite slowly against the ground...but it DOES drag, inch by inch! That's enough for Charem, wobbling atop his bloatedness with a goal set in his rabbity mind, his normally-floppy ears rigid with determination and his flaming floofy-tail waggling with energy!

Of course, when he does eventually achieve his goal, the 'little' fella will undoubtedly set his adorable eyes on another nom to pack into his soft belly... Never satisfied, those fat bunnies. But then, that's why we love them, isn't it?

Oh my goodness me! n..n   congruentPartisan is the artist of this, and I have to say, this is the most adorable I've ever been as a bunny evar! The combination of my own usual traits with bunny traits were done perfectly here, I think; and my fatness is both adorable and sexy!

For previous Fat Bunny Weeks, I've always either dressed up as a bunny, or nommed on a cute rabbit. :3 This was the first year I decided I wanted to be a 'bunnymeleon', and I'm really glad I did! Fat Chars are adorable in themselves, but mixed with floofy-bunny-genes like this, well! <3 <3 I think I have a winner of a form here...

On a semi-related note...it almost makes me wanna do some AV sometime with that cute, soft bunny-bum~ ;3