I'm Bartan, though I tend to use the Username of Dexdor on other sites. I'm just an open minded hermit that fell through the cracks of society. I spend my days watching the world, rather than be part of it. Other than a Chinese phone book worth of wisdom, enough OC's to sink a ship, and a 14 year story I'm too lazy to write, I don't have too much to offer. But if I have something to say, I mean it with respect. I admit, I can get a bit cynical and pessimistic.

That being said, I'm more of a writer than an artist by traditional means. Mostly due to a bad reaction to a needle in my primary arm, I can't draw very well anymore. But I've felt like my words can paint a picture almost as I envisioned it, better than what my physical being could pull off. Regardless, feel free to check them out. I usually write fantasy stories about dragons and other random creatures that are often not heard of. Though they are usually clean, I will do more mature things from time to time, and give a heads up in the artist's comments if there is one.

I'll also put a bit of a warning here as well. Alot of my inspirations come from music, and alot of that music tends to be on the more Harsh vocal side. Again, I'll place a warning if one is used if you do not enjoy that type of music. Everybody has their tastes, but there's a reason why I suggest a music title or track within these stories. Usually not from lyrics, but the tone of the music itself. My suggestion is to look for it on youtube, let it play in the background, and just try to let it immerse you into the story. Some people tend to have trouble with that, but if you can get it... If you can see it the way I see it, you'll find yourself enjoying the story alot more.

Speaking of those stories, my main library is on FA. It's my most checked site, and... "Arguably" my most... Popular? With no real luck on SoFurry when it came to stories, I'm giving Weasyl a try. If someone here enjoys my work, then it'll be worth it.

One more thing. If you are ever confused about any of the terms I do use, I've recently made a Vocabulary document that hopefully makes things clearer. If it's not on there, feel free to let me know and I'll add it to the list: https://www.weasyl.com/%7Ebartan/submissions/1850341/vocabulary 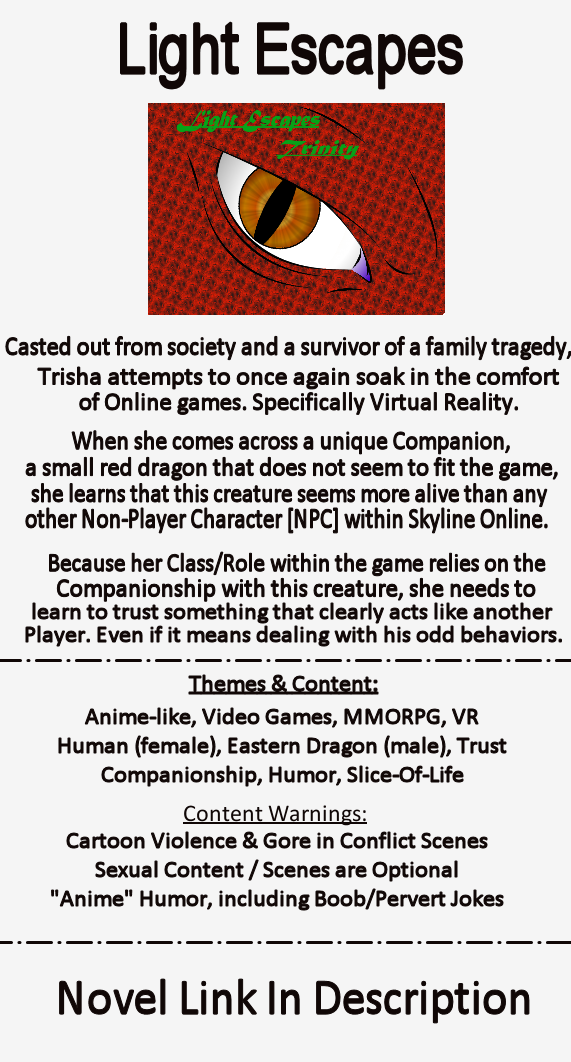 ...I can't believe I called it that either >>; Craptastic is more like it

Going to try this one last time, hopefully it'll be a success unlike the one for last October. If you're new to these, I just take up most of the tags people suggest/leave in the comments, and I attempt to cram them into a story. Usually a single story, but sometimes they're just to divided to throw them all into one.

-Comment on this journal, or one from a different site of mine, and suggest up to 5 keywords you would like to see (fetishes, genders, activities, positions, maybe locations). The more creative, the more it'll probably spark something for me. An Example: Straight, Bondage, Gambling, Beach, Doggy Style/Mounting. They don't have to completely make sense (that's kinda my job >>;)

-Try to refrain from suggesting actual Characters (Spyro, Renamon, "Your OC"), because I'm probably not going to use them.

*-I'll try to use all the tags suggested in a single story, but there are just some I either don't wish to do, or just don't enjoy. For example, I'm not into Vore, but I'll give it a shot like before. However, I detest Diaper, so that is a no-go. Same with Human- I really Really find Humans boring. Overall, I will have final say on what makes it into the story, but I'm going to try to throw in as much as I possibly can.

-I'm half leaning on making this one a continuation of April 2021's story (Look At What You Made Me Do), but we'll see the results. It may end up just becoming its own thing.

-Just like the last one, you are able to suggest more on other journal posts (or even the same ones, if you really want to get them noticed). I'm not going to suggest "Watching me" or "Favorite this journal" for bonus points/requirements, so don't worry. You can find the sites I'm on here:

The contest will close on my Birthday (16th of March), giving me about two weeks to work something out. No promises, because fish can happen during those times (like PC problems or internet crapping out) but I'll do my best. However, I'm going to need YOUR help with it as well! Show me that you care about these things and it'll be a yearly (maybe even Bi-yearly) thing. If I do not get 5 entries across ALL sites [Just a total of 5, not 20], the contest and likely all future ones will be canceled.

That's about it. You've got a month to think of something, don't let me down guys
~Bartan