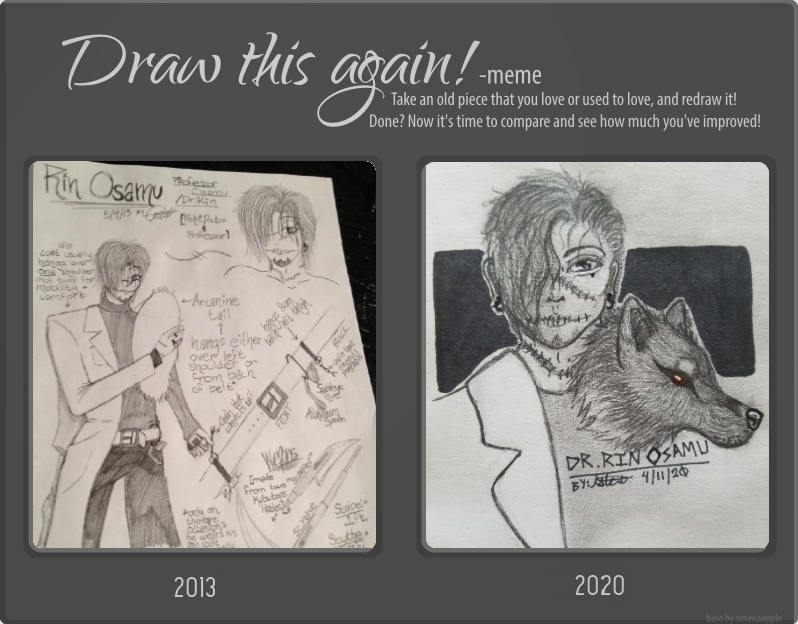 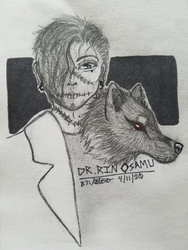 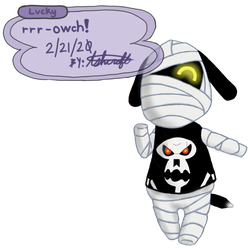 Click here to see the upload of strictly the 2020 sketch.

"Draw This Again! Meme" Template by omenadopts on DA

This is Professor (or doctor) Rin Osamu. He's a bit of a mad scientist/doctor/professor all wrapped into one. He's set in a post-apocalyptic world and upon his introduction, he's a criminally insane surgeon. He employs taxidermy into his fashion, and he wears that lab coat on only one shoulder. He's a very Dr. Frankenstein meets his Monster type character, but when kept on a leash (which luckily for the world he is by my fiance's character's father) he's capable of incredible medical feats. Fun fact! I originally made him up for a post-apocalyptic Pokemon role-play!

When he was still a Pokemon RP character, I only ever drew him but once in the 2013 picture displayed on the left, but I grew very attached to his character and worked extensively via PMs with the GMs (game masters) of that RP. Unfortunately life circumstances tore me from the site and I haven't had the heart to go back since, so I never got the chance to use him the way I was so amped up to. My fiance and I started a private RP back in April-/May-ish 2019 in which he now has a prominent role.

So funny enough this picture started out 110% as a throw-away anatomy study. I had previously sketched up some sketches of anatomy studies for Azazel (another character in said private RP) and was sitting down to do some more. I kid you not, I was literally only an egg shape with an eyeball in when that all did a 180 on me. I stopped what I was doing to switch reference pictures, took a hit off the bong, and when I looked back at it I had an epiphany like "Omg it's Dr. Rin." lmao

My girl and I had been developing Rin's role a little further earlier that day (or perhaps it was the evening prior? Whatevz) and I think that inspired me to redo his headshot. However one rule of my Iron Artist challenge is that I must draw at least half of the character (this is really pushing it, but I'ma let it slide; hope that's cool). In creating this piece it forced me to ask myself a very important question regarding a fundamental feature of the good doctor's character design. In Pokemon: The Change (his old RP) He had an Arcanine Tail over the shoulder he didn't wear his lab coat on. In Weak (his new RP) I didn't want to get rid of his quirky habit of wearing the lab coat, nor did I think it was fair to the spirit of his old character design to simply remove the aspect altogether, so I decided to add this wolf-dog pauldron. He will also have two other dog heads that he wears on his person somewhere else on his person at all times as well, and is the surgeon on a pirate ship known as the S. S. Serberus so (a) it pays homage to the canine poke-taxidermy he once wore; and (b) it's a running theme for him. Oh, I did also leave out the neck of his turtleneck this time, and while that is something he regularly wears, I did want to show off his sexy neck scars this time~

Looking at the pieces side by side is a very interesting experience for me. I remember back when I drew that piece in 2013 I was so incredibly proud, particularly of the headshot in the corner. I still have an appreciation for it, but I'm very proud of how much I've learned since this, most especially since I've been neglecting my art a lot more than I'd like to admit in those seven years... I still have quite a ways to go, but I've come quite far too. I would really appreciate it if you would throw some constructive criticism my way, be it here or on my 2020 Dr. Rin post directly so I can continue to grow and learn c:

Hells Below, so sorry for blabbing, how annoying! Thanks for the time to anyone who bothered reading, and have a fantastic rest of your weekend Star Creatures!