Hello this is orc. 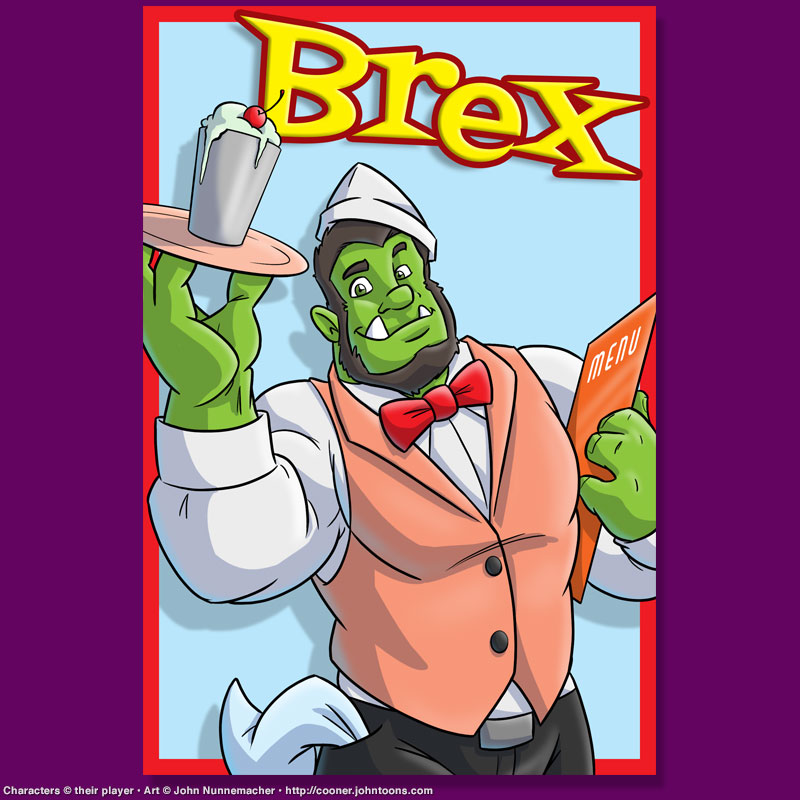 An Update on Character Names and Info

Hi folks, it's been a while since I posted my last journal, and I've gotten a lot of commissions and done a lot of writing about orcs since then. In fact, Brex is no longer a singular character inhabiting a simple world. He's now got friends, enemies, (ex-)boyfriends, creatures and otherworldly powers to deal with! I've actually got quite the story going for him, much more than I originally intended. But a lot of these things have been inspired by commissions, so it's a feedback loop of cool orc stuff.

Anyway, I figured I would make a quick sort of reference post to explain the names Aros and Brex and how they work now, as well as providing some updated character info for the characters I have: The orc, the orc-demon, and the lion.

What do I call the orc, the magical one with the cute face and the rings?

He's always been Brex, and that's never really been in question. The thing that seemed a little tenuous is whether he's my "orcsona" (brutally adapted from "fursona"), or my Original Character (OC). The answer is both, but leaning more toward OC. Since I like to write about him and imagine stories for him, it's hard for me to point at him and say "this represents me." I identify with a lot of his problems, but that's by design. Here are a few things about Brex that you may or may not know:

What do I call the demon, the one with all the chest hair and in all the *cough* art?

Formerly known as simply "Demon Brex", it seemed a little unfair to both Demons and Brex, since this guy is really neither.

Aros is actually not a demon in the traditional, abrahamic sense that most people are used to. He's closer to a fantasy world demon, but even those are usually too mired in the "powers of darkness, ultimate evil blah blah blah" to really reflect what he is.

Aros is an asmosyne. If you already know what that is, congratulations! You happened to be reading a link on my twitter feed (that I have actually since lost) explaining how they work. For everybody else, I'll put a quick summary here:

Aros serves as a foil to Brex, trying to help him achieve what Brex fears to attempt, whether by societal pressure, mild anxiety or just his own paranoia over safety. Aros is also far more sexual and flirtatious than Brex is, because Brex grew up in a place where he didn't feel comfortable being sexual, and ended up very shy and reserved about it. But Brex wants to be more sexual, which in turn feeds Aros' actions. Aros doesn't really have a name, and honestly considers himself as much "Brex" as regular Brex does, but for our purposes, we need a label for him. And that's gonna be Aros.

Wait hold on, wasn't your lion guy a while back called Aros?

Yes. And he still is Aros.

While I don't usually use that character very much, I did bother to reboot his origins and motivation in the last year, as well as get a piece of art. So I wouldn't call him abandoned.

As for in-character reasons why he's called Aros? Well, have a look at his character history and description here if you want to look for a connection.

There’s little recorded information on Aros Orean before he began working at SublimiTech. Even though he has three degrees of varying prestige, calls to the universities in question will result in a confirmation of attendance and transcripts, but no individuals who remember the lion distinctly.

Requests for information from SublimiTech are equally vague. He joined the company a few years after earning his Bachelor’s. He studied for his Associate’s, and then his Master’s while ascending the career ladder. In just about four or five years, he managed to become the company’s youngest-ever Chief Technical Officer, usually due to his utter devotion to his work. Even the lion’s side projects affected the company’s prototypes, and he commands a certain respect even among the most senior employees.

Nowadays, the lion spends most of his time searching nearby businesses and social areas for potential employees, in his own casual sort of recruiting. He comes to the office less frequently, but still often enough to give feedback on SublimiTech’s new and improved devices. It’s all for the sake of user interface, according to the company. But a few civilians have dissenting opinions, claiming that the company is anything but ethical.

That doesn’t matter much to the lion, though. He just enjoys getting to know some people, learning about their strengths and weaknesses, and getting them on the right “team” at SublimiTech.

I don't intend to write anything more about Aros (the lion) other than the occasional roleplay with a friend. I'm not saying that he and Aros (the asmosyne) are the same character. But I'm not not saying that either.

Clearly, as you can see in the description above, Aros the lion is in an entirely different world than Brex's. And it's not proven that those worlds are even connected. Nobody has ever recorded what happens when an asomosyne finds a host who is talented with telepathy and mental magic, with no data to prove or disprove that this might encourage that asmosyne and its host to develop magic that will effectively disguise them among any population, even anthropomorphic felines and canines. There are zero records of asomosynes being able to find tears or portals in space and time that may connect worlds. And that's all I have to say on that matter.

Though you must admit that Aros the lion certainly seems ambitious.

Okay fine, we've covered everything I guess. But what do we call you, the guy behind all the icons and art?

Aros. It's my screen name/furry name. Plus, I feel more comfortable identifying with the asmosyne because I'm achieving a lot of my goals recently and really pushing forward to self-actualization. I also enjoy helping people succeed at what they want to do, and in many ways, that's the major positive of an asmosyne. Plus, this way my badges at conventions are still consistent.

Besides, Aros has always been my name in the fandom and I'm too lazy to change it.

I wasn't actually reading any of this, break it down for me.

Hi, you can call me Aros.

There is also a lion who is named Aros. We cannot confirm nor deny whether this is the same character as the Aros mentioned above.

Have a nice day~