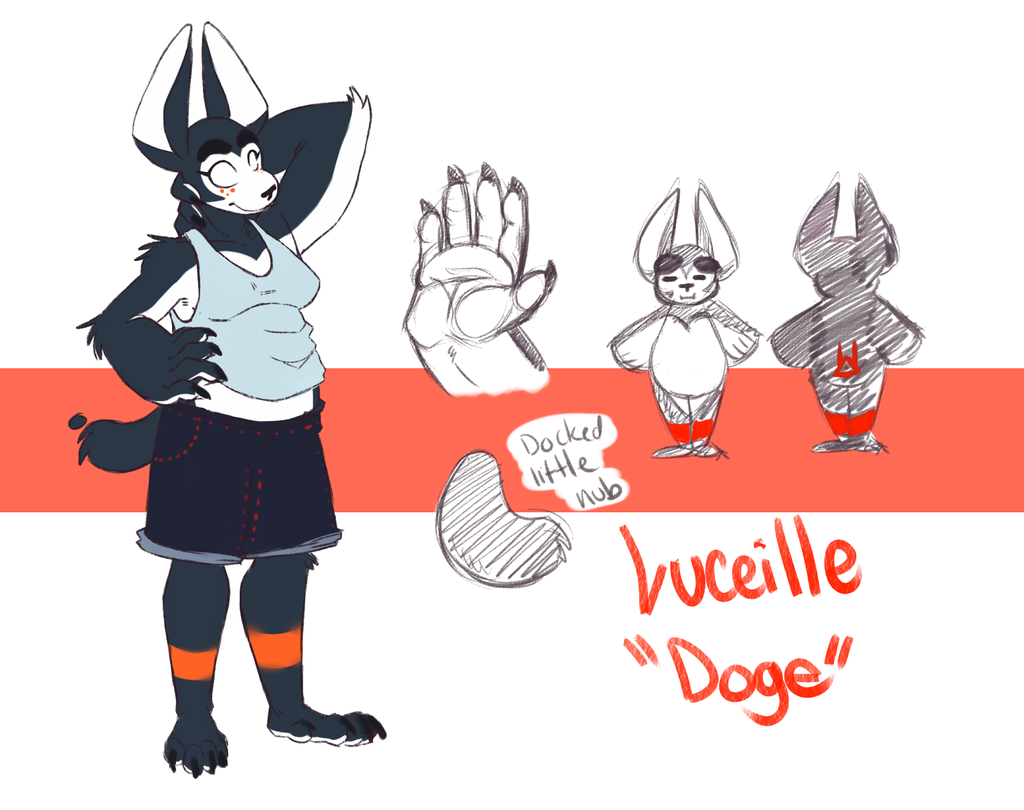 DONT WORRY ABOUT THIS GIANT WALL OF TEXT its just dum worldbuilding stuff, the ref stands true to her looks haha
Temperament/Personality: Erratic and juvenile at best.
Description: A bullheaded son of a gun if there ever was one, Luceille here has got enough fight, flirt, and drink in her to last a nation of teenagers a lifetime’s supply of stupid antics. Hard to get close to and even harder to break, she’s built up walls several miles high and limits her company to those simply passing through; usually meaning people she comes in contact with at her job at the local junk eatery.
Work Desc: Tosses garbage and cleans up messes for a bit under minimum wage.

Habits:
-Notorious flirt; often picks on those who seem naive. Advances made are almost exclusively female, seldom responds to other suitors making the first move.
-Drinks quite a bit; prefers hard mixed drinks to beers.
-Retains some animalistic ‘quirks’ that should have been shed after childhood; barking, growling, and teeth display.
-Fiddles with her nails a lot and wrings her wrists when worried.

Family: One sister, two brothers. Licorice (Agatha), Underwood (Mark), and Bartholomew, who actually really enjoys his full name, but what’s the fun in that when you can call him Bart, huh?

Misc:
-Lucy is part of a species of beings who carry tar-like ‘ink’ in their tails; an odd, pliable substance that each individual can bend to their likes and will. Most are directly linked via a standard thought process (simply thinking of an object or shape triggers it), however, Luceille’s ink was more emotion-based and proved…tricky to manage in her youth. It was docked for her safety.
-All red marks sans her cheek freckles are scarification tattoos. There is no fur on these areas (leg bars, lower back triangle marking).
-Her eyes have a very slight opalescent film over them. It doesn't do much besides distort how she sees color; everything’s a bit blotchy in strong light but it’s not too bad. She shares this trait with Underwood, who has it a bit stronger then she does.

(copypaste from my worldbuilding blog that i absolutely have failed to keep up, the desc i had there still stands true to how she is currently. information on her species will be provided later, granted i get my ass around to it 'u' this is basically just a standard info sheet as a 'get to know the character' kind of basis)