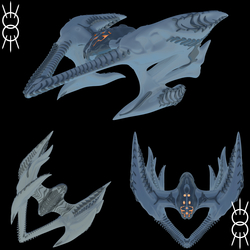 The Kerihekteki evolved as pack hunters on the extremely inhospitable world of Autris Mudax. Here, the hostile conditions of their surroundings and the intense competition with other lifeforms honed their combat abilities. They posses six limbs, four for locomotion and stabbing attacks and two for manipulation, crushing, and tearing. While they possess no individual digits, their massive claws are surprisingly dexterous especially when it comes to fabricating and manipulating weaponry.

Having never evolved eyes, their primary senses are smell and hearing. Their two front-facing gill structures taste the surrounding air while the horn like extensions on their heads detect sound waves with great sensitivity. They are capable of a rapid form of echolocation which is primarily sensitive to the proximity and density of surrounding materials. Mineral deposits accumulate on their dense armor as they age. Young Kerihekteki have a mostly smooth carapace while extremely old Kerihekteki display complex mineral deposit structures and an array of bony horns on their heads.