"GET THE SEAM RIPPER IT'S ALIVE!"

This is the official Weasyl of Woozle's Wonders and from now on is where we'll post our work, WIP pictures, updates and much more!

Woozle's Wonders is run by

ReddWulf and based in Stephenville, TX.

Please do not contact Redd on her personal FA/Weasyl/etc. accounts about fursuit commissions, contact us here or via email at woozleswonders@live.com!

If you are interested in commissioning us all of the info you need is below. Thanks for any faves or watches! <3

Our pricing and quote form

You can email us the filled out quote form or send it here via note if you'd like!

Please have a colored ref sheet ready when contacting us for a commission. We can't work without one!

If you don't have a ref you can commission one from us! If you want an artistic freedom suit there is no need for one. 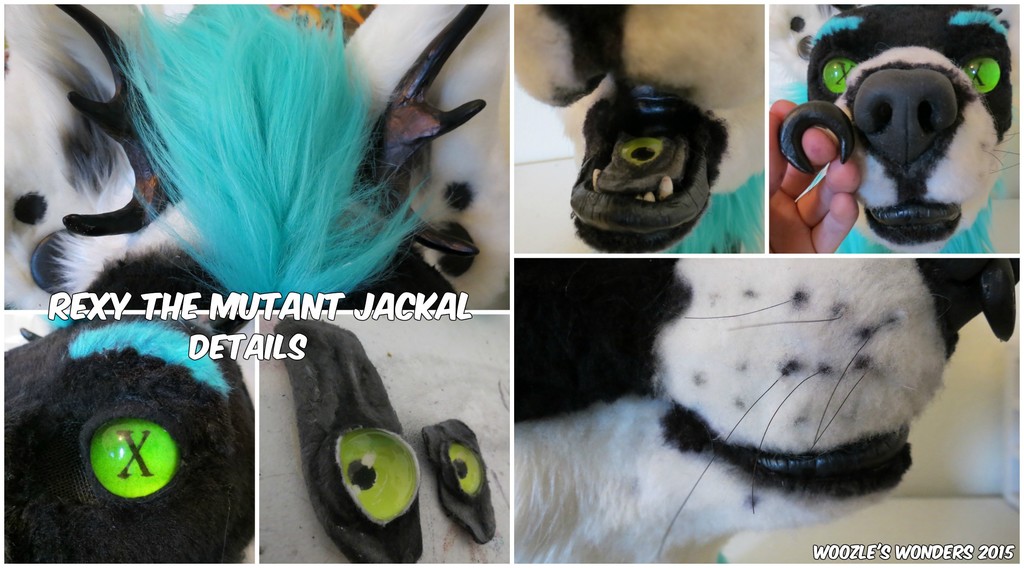 A user by the name of J-J Kit commissioned us awhile back. Things were going fine until after the eviction which you can see more info on here- http://www.furaffinity.net/journal/6744125/

We got moved into a new place and started getting caught up on our commissions, which has been difficult but we have been doing the best we possibly can.

This person was fine until we faced a few more delays. He started being very rude to us and began talking down to us, which no artist should ever experience regardless of their skill level or what they do. Below are screen caps of his and Redd's conversation. These are not the only examples of him being rude to us but they are what we currently have screen capped. We will post more if needed. Now, we are able to take someone telling us we did a bad job. We can take a bad review. But that isn't what this is all about.

Now yes. We did mess up on some details on his head, but we would have been willing to fix anything and everything he pointed out as being wrong. All he had to do was ask us, and he knew that from the beginning. He didn't point out the whisker spots were wrong the first time around when we furred his head, then we re-furred it completely and he didn't point it out then either. He never mentioned anything about the eye color being off. He never once told us anything was wrong until literally an hour before we were going to go ship him out. His head was also not even close to being realistic. It was as toony as could be in our style. Below is it compared to one of our realistic heads.

Was his head the best we have ever done? Not by a long shot. We haven't done many toony things at all. But we have always been willing to refurbish our old work for free or for very minimal material cost. We would have offered to re-furbish his head after doing more toony stuff, just like we did for Tamaska, pictured below.

So, due to how he was treating us I canceled his commission and refunded him. The only part that was not refunded was the down payment, which as stated in our TOS is NOT refundable. We told him if he had any issues receiving the payment he should let us know. We reserve the right to cancel a commission for any reason, as stated in our TOS. The way he was acting was sending up red flags so we decided it would be best to cancel and refund him.

He emailed us the same day saying he hadn't recieved the money. We told him it may take until Monday to clear seeing as it was Friday and it was going through our bank as well as pay-pal. We sent him a screen cap of our pay-pal to prove we had in fact sent it to him. Below are screen caps of the emails as well as the exact screencap I sent him of what pay-pal was saying on my end. Naturally we blacked out any sensitive info to protect ourselves and our customers.

Today, Monday 8-10-15, he sent us another email saying we'd have to send it again because he hadn't received it. We thought this was odd as paypal said the payment was completed and it had already gone through.

We told him we would call pay-pal to see what was going on and we weren't going to send more money until the payment was either canceled or sent back. We hadn't expected pay-pal to take the refund out of our bank, as one incident in the past where a customer required a refund it just made out pay-pal go into the red.

We called pay-pal, and they told us he had in fact gotten the payment, as pay-pal fronted the money so it would be available to him immediately. He had every cent of it and was already able to use it if he pleased. They told me they would send him an official receipt via email for me.

Here is what he had to say when I told him-

He did in fact try to steal another $1400 from us. If we hadn't of called pay-pal and if we would have just sent another payment, he would have.

These are the last emails that have transpired between us. Redd was beginning to lose her temper and become un-professional, so we have not responded further, nor do we plan to.

So, this is our side of the story. We highly recommend that you steer clear of this person and that you not do business with them. All of our customers except for this and one other person have been pleased as punch with their suits and us, and we hope to keep it that way. This was a bad experience for all involved and we wish it hadn't ended up like this, but when this person attempted to steal nearly $14000 from us we couldn't just sit back and not warn people about him.

Please do not white knight or confront this person. We believe that when people do that it only makes things worse.

This is just a BASE price. For a quote see our website! http://woozleswonders.weebly.com/base-prices--quotes.html