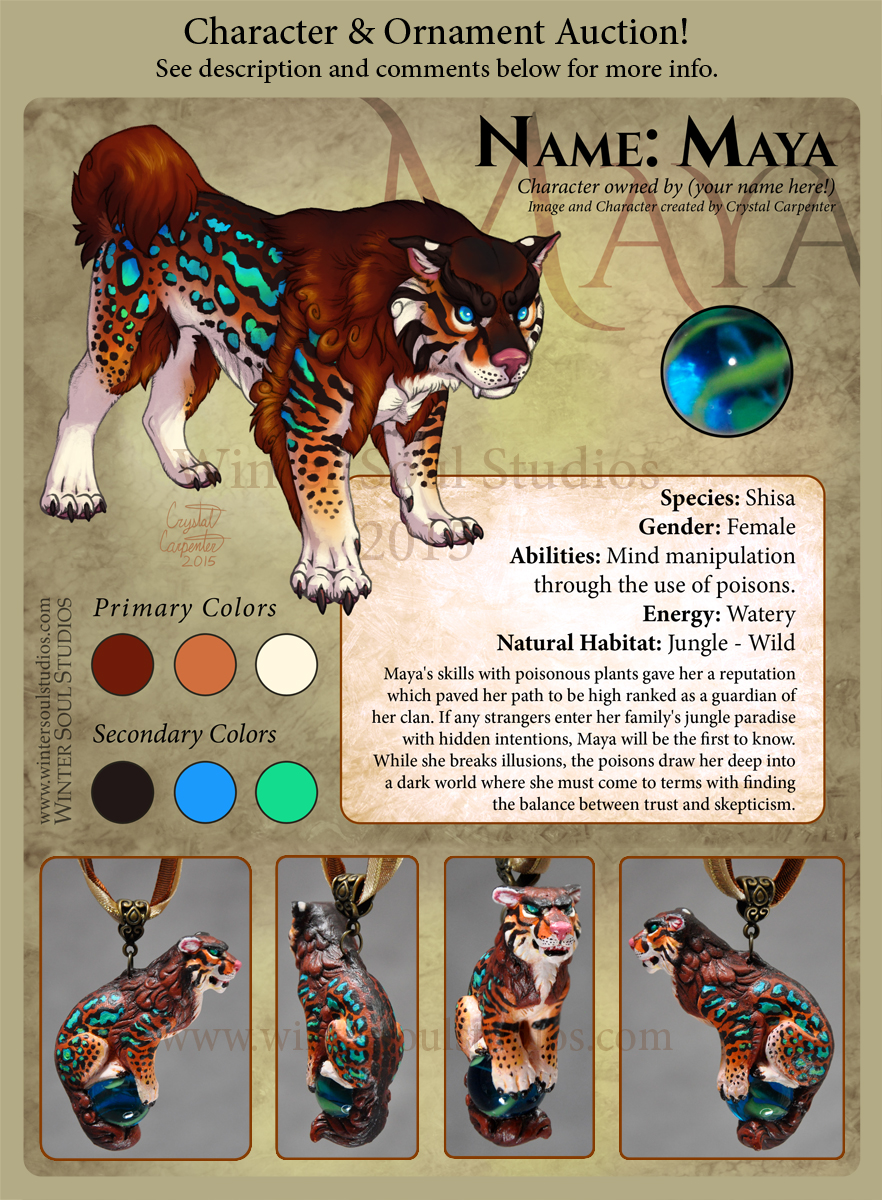 Just for a bit of background on these special auctions, as I make my pendants and figurines, to me these are more than just casts. Being hand painted, every design is a unique piece of art, and has felt like the pendant is imbued with a bit of the essence of that individual character. As I create these characters, and as I paint the ornament, the story of the character is just as important as the colors and markings, and is consciously kept in mind throughout the painting process. To push the idea further of each one of these pendants being their own personality, I've decided to introduce these limited character auctions! On top of the Shisa already being limited edition, these particular paint jobs will never show up again on another Shisa ornament. You'll be adopting your very own mini guardian lion-dog, and be able to physically hold your new character! I would like to hold these once every one to two months, so again, these will be a rare treat I hope all of you enjoy. :)

More photos of the actual ornament may be seen here:
*Photos coming soon!

Character Background:
During the time of the height in Shisa trade, these creatures became adapted to a variety of environments. While they're best adapted to grassland/savannah areas, over generations some Shisa came to call jungle settings home. This terrain isolated populations, and in combination with their intense energetic abilities and possessing an adaptive intelligence, these creatures also developed a unique relationship with the plants in the jungle. This relationship allows those pockets of wild Shisa to exist fruitfully - food, clean water, medicine, shelter, plus any additional luxuries make for a beautiful paradise.

Just as with any living creature, some Shisa use these relationships and their abilities for darker forces. Maya's skills with poisons quickly gave her a reputation which paved her path to be high ranked as a guardian of her clan. Not all wars are won by brute force. Her energy is quite watery and flowing, much like a deep dream state. This bode well for her work with the poisons. If anyone came across the clan with hidden intentions, Maya would be the first to know. Being incredibly wary of newcomers, the clan could count on Maya to test every stranger.

On the other extreme, the leader of Maya's family had always been a generous one. How could one deny a tired traveller luxury when paradise was all around? Only those closest to Maya knew of her disgust with the king's open nature, so when he just happened to suddenly pass away in the night, many of her close relationships were put on shaky ground. She may not have agreed with his ways, but she had always been the calculating type, therefore she would never make such a foolish move. Her motives for using her abilities were strictly to protect the paradise she loved, and an open leadership could easily cause strife in their mini-kingdom.

Unfortunately for her little paradise, the incident did cause strife. Her struggle to continue to protect her home was not just an outward struggle, however. From within, the poisons drew her into a progressively darker world as she strained to come to terms with finding the balance between trust and skepticism. While Maya works to break the illusions surrounding the death of their king, will she be tempted by poison and deceit to reach her own ends?