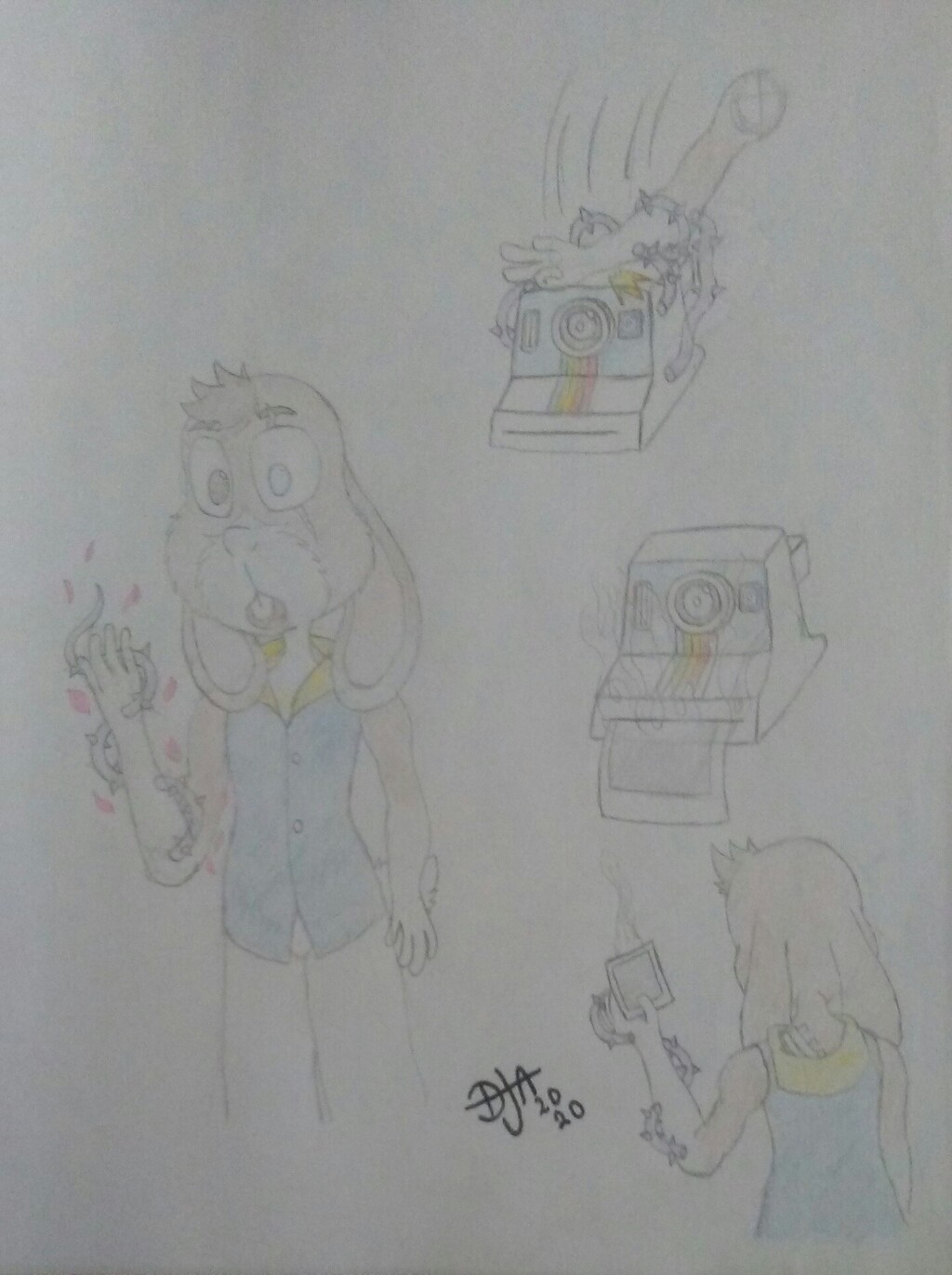 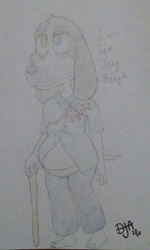 Just as stated in Dan's bio (you can check it in full right here: https://www.weasyl.com/~winterrythmbunbun17/submissions/1924699/my-sona-2020-edition) he obtained his ability after getting shot with a special arrow that almost killed him being so close to his heart, but for some reason it didn't reached it and slid of him when he survived, upon recovering thanks to his partner's care he felt his whole body was burning and had a lot of sweat, that's when he swayed his arm a bunch of purple vines with thorns appeared from it, startled by this phenomenon he stumbled across the living room only to trip and have his arm hit one of the Polaroid cameras he had in a table, the vines got attached to it and he got scared thinking it might broke the camera but what really happened is that upon the smack the vines attached to it made the camera take a photo, it has smoke on it and he took it out shaking it to see what was in it as the smoke cleared, he saw the pic and it was her partner holding the arrow that pierced him!. This mystery was getting more and more interesting.

Spiritual vines: They're Dan's ability, it manifests as thorny purple vines that when hitting a camera(for what's known to test on for now)it takes a spirit photography of what/who he wants to find.

Cataclysm arrow: It's a special arrow imbued with the essence of the Katalist Rock, upon piercing anyone they do the same as said rock, they test the user to see if they're worth of an ability through a live or die test, if they fail they die, but if they win the arrow gets out of them healing any disease or wound the user had(even those made by said arrow). NOTE: Anybody facing a life or death situation have more chances of passing the test and receive the same beneficial effects.

Katalist Rock: It's a special rock that fell from outer space de-attached from the colossal meteor that hit the ocean spreading the rock all around the world through land, air and sea. They test anyone who touches them and if they pass they go back alive with an ability, if not they die. These rocks can be pulverized to give some items their essence.

Cataclysm abilities: They're the pure manifestation of one's true nature and can do a uncountable amount of things depending the user. They rarely fit with the user's needs or personality but the arrow touches more on the area of the soul itself making the chances of that happening higher. These abilities can also be obtained from birth but one of the parents at least as to be already a user.

These abilities are visible to both users and non-users.

Yup I chose Hermit Purple's ability to be my cataclysm ability, though to be more precise, I'm referencing Jonathan's stand which was also called "Hermit Purple" in DIO's diary.

And before you say it, no the cataclysm stuff of my lore is not a copy of stands, they're inspired by them. What can I say? I just love JoJo's so much :3 .