Lecture Hall with the Teaching Assistant (Sefter and Vaughn) by WindTide 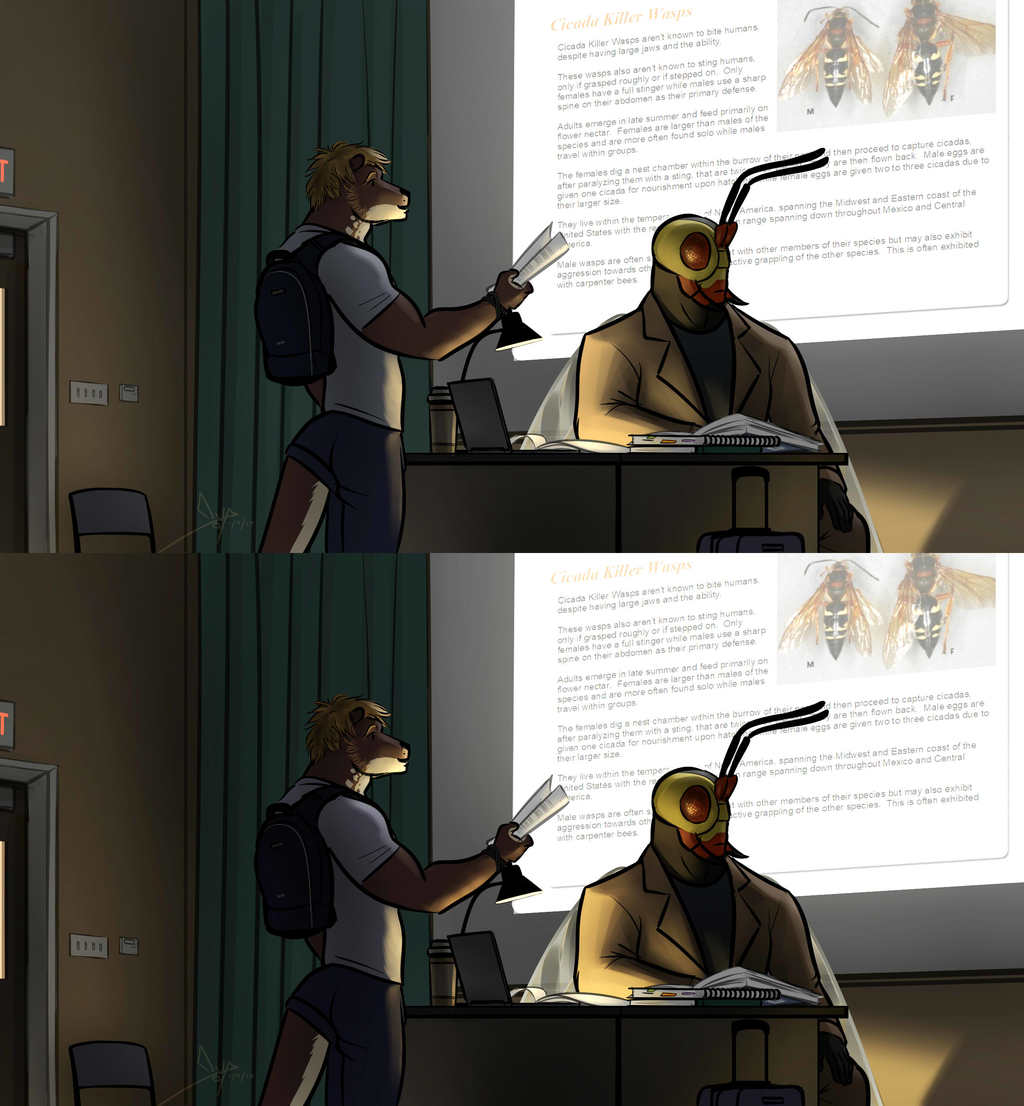 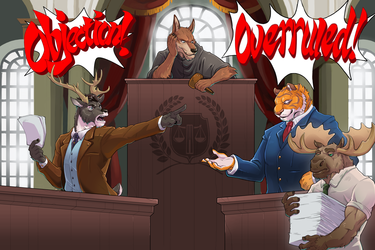 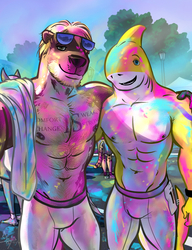 Lecture Hall with the Teaching Assistant (Sefter and Vaughn)

The clamor of students filled the room as the vespine teaching assistant made his way to the front desk, with no sign of the chaos ending soon enough. That did not stop the wasp from getting his laptop hooked up to the projector so he could prepare his lesson for the day, dimming the lights so the students would pay attention and keep themselves quiet just in time for the arthropod to begin his lecture.

"Good day everyone! As you all may have heard your instructor for this class was not feeling well and had to call in sick for today. A last minute substitution was made on the instructor's request, so I will be filling in today's lecture since it falls under my expertise of study. While I am sure that some of you were looking forward to having a free day off for this class, today's lesson will go as planned. I expect everyone to stay seated and not to make any attempts to dismiss themselves early."

The substitute had his eyes already set on a few students, most noticeably a blue caprine fellow who looked like he was bound to cause mischief in the lecture room. After the man cleared his throat, the insect turned on the projector to the first slide, giving a proper introduction to the class. "You might have all seen me running around the Science building in the entomology department, but for those who are not familiar I am Vaughn Woods, a graduate student and T.A. working towards a Ph. D. in entomology."

Whether or not the students were paying attention to his speech, or staring at him because he happened to be a giant wasp man roaming around their classroom, the lecture hall seemed to be eerily quiet. Vaughn honestly would have hoped for a livelier audience, but he couldn't help how people saw him from time to time. Without further to do, let's get started on today's biology lecture to see how insects contribute to their roles in ecosystems as well as their impact on human civilization..."

"Alright class, that should cover today's lesson! Don't forget to go over today's lesson from the text book starting page 148... it will be helpful for your homework assignment!" Whether or not Vaughn's words were heeded by the students, most of them have already left the classroom to go along their daily schedules. The classroom was empty before the wasp even realized it, so he began to clean up his belongings so he could continue his busy schedule he had set for the rest of the afternoon.

"Excuse me Mr. Woods! I needed to write down a few more things in my notes and wanted to ask you a few questions before you left." The insect peered into the rows of seats as he tried to find out who was calling out to him, his compound eyes fixing their gaze on an mustelid who approached the teacher's desk. Youthful and beaming with optimism, it seemed the young otter was fixated on the side shown on the projector.

"Oh. hello there. I was sure I had gotten to everyone during today's lecture. What did you wanted to ask of me?" Vaughn remained seated as he turned towards the projector screen displayed behind him, showing a slide on the Eastern Cicada Wasps that he used near the end of today's lecture.

"I was hoping that you can tell me a bit more about your species. I mean, it's not often we have a professor who knows so much about themselves like you do. Not many people know about insects, and frankly I was getting caught up in the lesson I forgot to write it down!"

Vaughn's antennae seemed to wriggle in response from the student's remark, but he straightened hiss posture before he began to explain "Well, that's very flattering of you. For the most part, Cicada Killer Wasps mainly capture cicadas as part of their main diet and food source for their larvae. They are gentle giants that rarely attack anyone without provocation, and are the largest species of vespine creatures in North America natively..."

As the TA gave a summarized version of his notes to highlight the key points, the otter took the time to write down what the arthropod instructor said, though it seemed that his eyes weren't just fixed on the projector screen. All the same the otter looked attentive and continued to follow along the conversation, though it seemed it did not take long for him to write down all he missed.

"Thank you Mr. Woods. It's a real treat to get a guest lecture from the university to sub into our biology courses." The otter casually leaned against the table, most of his weight forward so he could peer at the stranger a bit closer than one would normally be inclined to do so. "Actually, I was hoping that there might be another favor you could help me with, if you had extra time out of your schedule."

"Oh? Well I might not be your instructor, but I can do my best to assist you with your assignment —"

"It's not that." A smile seemed to work up on the otter's face before he let his eyes look into the compound eyes of the wasp, before he explained further. "I was thinking it would be a better opportunity to learn more about insects if I took a more experimental approach. Say... taking some time off to go grab a drink at a bar? It's nothing out of thee ordinary, just thought you would like to take a break and unwind with some company."

Vaughn didn't quite expect this kind of request from an undergraduate student (even if he was technically not his instructor), leaving him a bit bewildered as he didn't have an immediate response formulated. The otter however filled the void of silence as he continued "My name is Sefter by the way. I just thought that it would be a nice distraction this evening to meet up outside the classroom. Get to know each other better."

Whether or not the insect had any doubts or reservations against such an offer, the insect only managed to offer an awkward cough as he cleared his throat, looking back to Sefter as he answered "N-not at all. I will have to get things finished with my work for today, but after 6 I can get ready to meet you."

"Excellent!" Sefter did not hesitate to write down a number for the vespine to keep, the otter strolling away as he waved back to the T.A. "See you after 6!" As the otter left the classroom Vaughn was left with a slip of paper in his hands, now uncertain how today's evening would proceed in the unexpected turn of events that just happened.

What can I say about BGN's excellent work, other than it delivers on a great scenic atmosphere between two collegiate students discussing entomology together! Tresh Levett joins in this picture with his dashing otter Sefter Teeg as he attempts to grab the wasp's attention with a ploy to get to know him outside of the classroom! What will happen from here? (Hint: probably something to do with butts at some point)

Thank you once again BGN and Tresh for allowing me to participate in this endeavor!