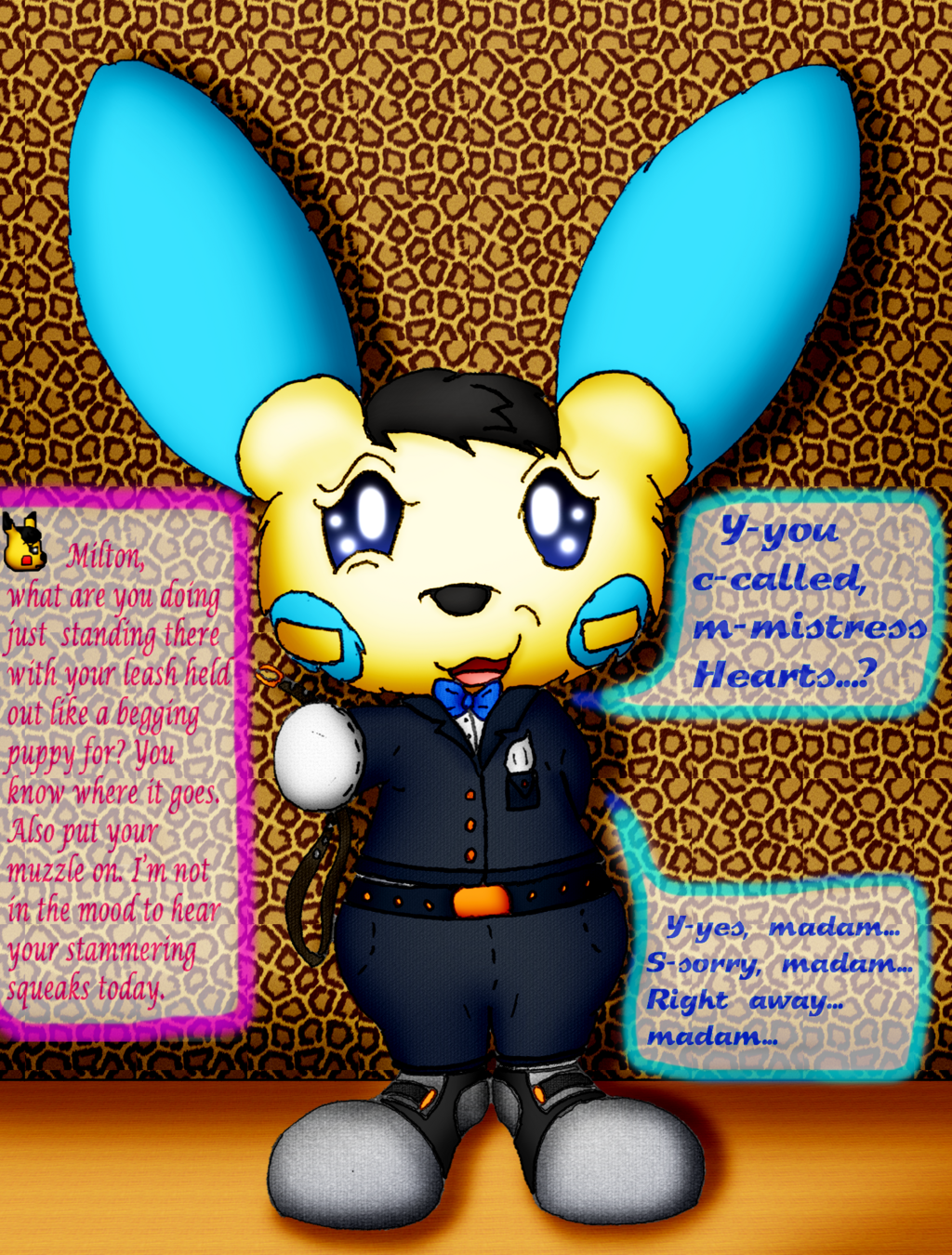 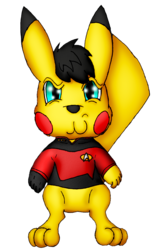 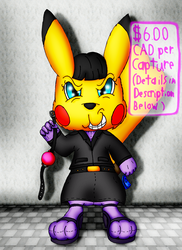 Here we have yet another OC I've had for a long time but never bothered to develop much...so allow me to fix that. XD

Milton the Minun (last name unknown, if he had one he forgot it years ago) used to be a lowly grunt for a crime syndicate, but was a total coward and a weakling. Every day the threat of being "put to bed with the Magikarps" for his incompetence and lack of backbone loomed over his head...until the fateful day the infamous mercenary, Alice Hearts, was hired to infiltrate the gang's headquarters and take down all their head-honchos.

Milton was, depending on how you look at it, extremely lucky or unlucky to be standing guard at the front gate this very night. Alice, not wanting him to "squeal," was about to smother him to death, but his puppy-dog-pleading eyes and pathetically cute whimpers convinced Alice to spare him...for the moment. She left him practically mummified in tape save for his nose on the front lawn of the mansion while she "took care of business" inside.

After the Pikachu merc finished up John Wick-ing the mob syndicate, she casually waltzed back out to see the poor helpless Minun still squirming on the ground. Realizing he'd probably suffer a harsh fate at the hands of any surviving members of the gang she'd just mopped up for failing to slow her down, she offered the Minun a new home and job with her as her "assistant." The Minun reluctantly agreed, seeing no other option and being completely at her mercy.

For the next several months Alice kept the Minun like a "pet," forcing him to wear a collar, leash and muzzle for her amusement, and as seen in her "Bounty Huntress job ad" (https://www.weasyl.com/~unownace/submissions/1669063/alice-hearts-merc-for-hire-read-description), occasionally used him as a "display piece" to demonstrate the type of "work" she does.

Over time, the Minun, who after some time was finally allowed to tell Alice his name, introduced himself as "Milton," claiming he could not remember much else of his previous life. Alice knew right there by his nervous yet clingy demeanor he'd developed full-on Stockholm Syndrome, and thus allowed him a bit more free range and privileges as she had no reason to fear him trying to escape or turn on her.

Now Milton acts as Alice's "butler" of-sorts, though still sometimes takes on the "boy-toy/pet" role when his Mistress desires it.