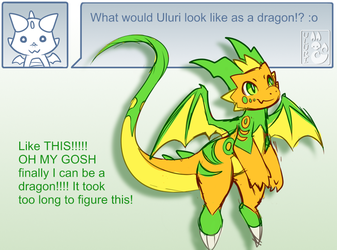 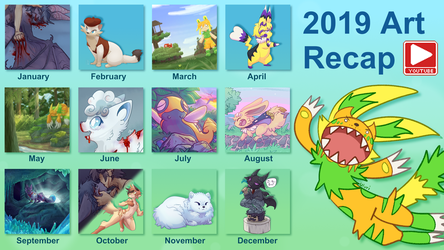 Thank you Axial97 for helping me build up a dragon design for myself! It's been 9 and a half years that I've been trying to figure out a design, but my gosh it finally happened in a way that actually fit. I can be a dragon now!

I can be a lightning dragon that I have always wanted to be. I got me a long tail just the way I like. My skin is nice and smooth with scales. CLAWS and TEETH! Got me some wings, too. Best part, I can walk quadruped or biped. I still have me some fingers, but can happily scuffle around the dirt.

NOW how tall/long should I make myself? Dragon form is 4ft tall from head to toe, and 8ft long from nose to tail. Sat down an measured as best as possible.

So, how did I decide to change things for this? The most noticable is that the end of the tail isn't white. Two reasons. The white was a mere accent anyways, and it was never supposed to be there in the first place. Uluri's first design had a cut tail at the tip. The Yellow tummy was added to help with making the tail seem more fluid along with the rest of the body. I wanted to avoid making the tail look like a seperate piece.The back/leg stripes are now technically seperate from eachother. It felt more smooth to the res of the body to make those to marking wrap seperately. The back stripe now visually connecting the leg stripe and ring along with the two tail spines and wings. The top green is still resempling clothing similar to a crop top jacket, but that was really hard. There are a lot more triangles/arrows in the design to match with the head. Spiky dragon so I added the arm/foor to have more angular transition, too. Arrows everythere. The back of Uluri's head looks like a Sunkern XD

I'm going to try it out as main for a while.