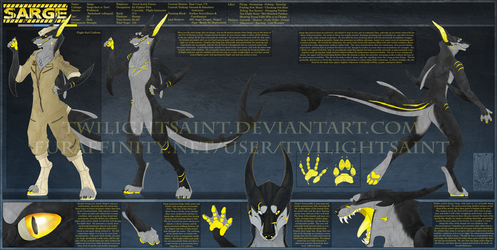 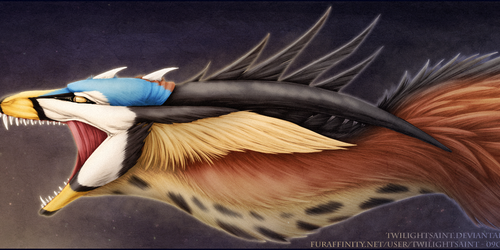 This gal has been in the works for a long time, at least since this past spring! I got a raptor blank with the intention of trying my hand at making a partial fursuit, when I realized my sewing machine was several states away. This gal will be a fursuit someday! Probably start out as partial, and possibly later on a realistic fullsuit.

I was debating on whether to go with black and tans, but was reminded that I already have quite a few black and/or naturally-coloured fursuits. In my training, I learned all about and worked with Alpha Zulu, and knew at once I had to make her Navy-themed!

Physiologically, AZ is based off of the Jurassic Park raptors, as they'll always have a special place in my heart~ Her only plumage is an emotive crest and diamond-shaped tail fan, and short proto-feathers covering her body. I also love their huge, square feet. Look so tough.

And though her name is based on the phonetic alphabet, she is not related to the Jurassic World raptor squad! (They're probably distant cousins and see each other at family reunions.) I've seen a lot of folks naming new raptor characters in 'military code,' ( cough phonetic alphabet,) inspired by JW, but the title 'Alpha Zulu' actually refers to a real entity in the Navy. And since I'm actually Active Duty US Navy, I kind of geeked out on that aspect. I really, /really/ want to do a piece of her in anthro form in dress uniform - all the ribbons, all at once.

Also, you can thank my handler, ThePastelKitten, for asking me to post this now, as he said he really wanted to see it. XD Better to post this now than later, too, so I can add this ref to my OC list for my 10k FurAffinity Watchers' Raffle Journal! I may or may not do a larger ref featuring AZ's anthro form at a later date. I like this stand-alone feral shot.

Put 'Sweet, Sweet' in your comment if you actually read all this. B)

Check my front page for links to Commission Information and availability.

Thanks for checking her out!
-Art & Character (c) me, TwilightSaint