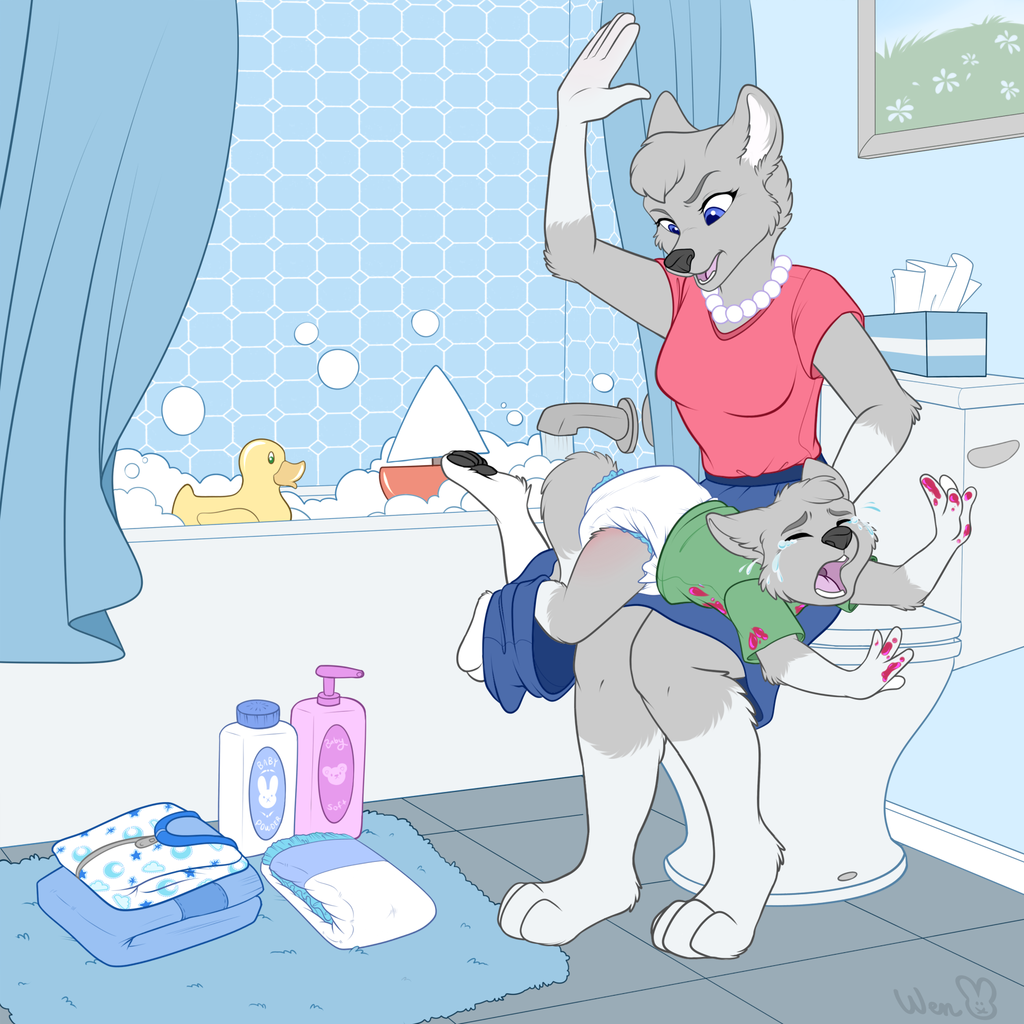 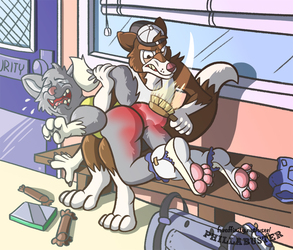 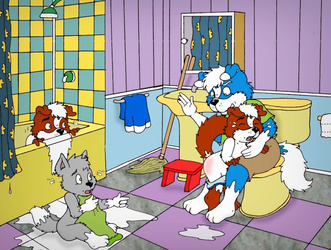 "Mommy, Mommy? Mommy! Mama! Mom." repeated Caiden as his mother finished up her conversation on the phone.

"I'll talk to you later. OK, bye. Beep" hung up Cheryl as she turned to the impatient toddler, "Caiden, when mommy is on the phone or talking with another grown up you need to wait until we're finished talking and don't interrupt. It's not very nice and rude. Understand?"

"Good boy." said Cheryl as she ruffled his head fur, "Now what do you need?"

"Oh, uh. Oh, can I has some cherrwy pie?" asked Caiden as he pointed to the freshly baked pie on the counter.

"Hmm, it's a bit too close to dinner for that right now sweety. You can have a piece after dinner." replied Cheryl

"I said 'no' Caiden." repeated Cheryl as she started to get some of the food out for dinner.

"I wanna eat pie now! Hmp!" stomped Caiden as he crossed his arms.

"Caiden Alexander Smith. Do you need to go to time out AND lose dessert privileges tonight?" said Cheryl sternly as she turned to the grumpy toddler.

Caiden thought about it for a moment and shook his head 'no'.

"That's what I thought. Now you go play before I cook only vegetables tonight." playfully threatened Cheryl.

"Eep!" went Caiden as he rand off to go play.

A few minutes passed by and Caiden was still wanting that pie. He grumbled to himself about how mean his mommy was for making him wait until after dinner.

Cheryl's cell phone went off again. She answered the call and started talking.

"Oh, hold on. There's bad reception in here. Let me move to another room." said Cheryl as she left the kitchen and went to the study and continued her conversation.

Caiden saw Cheryl walk into the other room and noticed that she left the pie unattended.

'Now's my chance to get some yummy pies' thought Caiden to himself as he toddled to the kitchen.

Caiden quietly made his way into the kitchen. He saw the pie sitting on the counter. He looked around for something to help him get on the counter. Caiden swiftly grabbed a chair from the dining room and dragged it to the counter. He then climbed on the chair and reached for the pie. Caiden reached and reached and finally managed to grab the whole pie. He plopped down in the chair with the pie in his lap and started picking around the pie as to make it look like it wasn't tampered with. However, the pie tasted too good just to pick at it and Caiden started devouring the pie making a mess of himself, his clothes, the chair, and the floor.

"Caiden! What are you doing?!" said Cheryl as she came back into the kitchen from her phone call.

"Ummmm....I's jus eatin' some pie....doya wants some?" offered Caiden nervously as he handed her the jumbled mess of pie crust and filling.

"I see that you're eating pie and no I don't want any right now." said Cheryl as she took the pie tin and grabbed some napkins and tried to wipe the sticky cherry filling off of Caiden's fur and clothes, "sigh Caiden, this pie was for the whole family and not just for you. You knew that and you ate almost all or it!"

"Ack! Ima sowwy mommy... You can makes anoter one wight?" said Caiden as he fidgeted while Cheryl cleaned him.

"I can but, that's not the point Caiden. That takes lots of time to do. That wasn't a very nice thing to do young man. Ugh, this stuff isn't going to come off with a napkin. You're getting a bath." decided Cheryl as she stood Caiden on the ground, "Now, what did I tell you not more than an hour ago about the pie?"

"That's right. So instead of obeying me, you decided to sneak some pie?" continued Cheryl

"Now your tummy is full and you won't be able to eat my yummy dinner?" asked Cheryl

"Yesh...I'm all fulls." replied Caiden as he rubbed his tummy

"That's what I thought. Caiden, do you know what disobeying means?" asked Cheryl as she crossed her arms and tapped her foot.

"It means not wistening an not doing what mommy or daddy tells me too..." answered Caiden

"Correct, and what happens when you don't obey mommy?" asked cheryl sternly

"We gets in twouble..." whispered Caiden.

"That's right. Since you didn't obey me and ruined you're dinner, you're going to get a spanking, a bath, and then you're going straight to bed with no dinner. You also lost dessert privileges for tomorrow night too." announced Cheryl as she grabbed Caiden's paw and lead him to the bathroom.

"No mommy! I'll be a good boy! I dun wanna go ta bed...." cried Caiden as he was lead into the bathroom

"Do you want to loose dessert for TWO nights?" asked Cheryl as she started the bath water

Caiden shook his head not.

"Then I would suggest not throwing a temper tantrum." said Cheryl as she checked the water temperature, "Now you stay right here and think about you're behavior. I'll be right back with your sleeper, a clean diaper, and a towel."

Cheryl left to go get those things while Caiden stood there waiting. He knew that he deserved this for taking the pie after being told not too. He still didn't want to go to bed early. Cheryl returned and placed the items on the ground and sat down on the toilet.

"OK Caiden come here, it's time for your spanking." said Cheryl as she pulled her son over and pulled his shorts down.

"No mommy pwease! Dun pank me! I won't do it's agian!" cried Caiden as he was placed over her lap.

"I'm sure you won't but you're still going to be punished young man." said Cheryl as she positioned him over her lap

Once she was ready, Cheryl gave Caiden ten firm swats over his padded rear.

"You. Will. Not. Disobey. Me. When. I. Tell. You. To. Do. Something. Understand!?" lectured Cheryl between the swats.

Once the spanking was over she stood her crying toddler up and undressed him. She placed his light pink butt in the bathtub and scrubbed the pie filling off of him. After the quick bath, she dried him off, re-diapered him, and put him in his sleeper. Caiden went out and said goodnight to his brother and father and then went to his mother to carry him up to his room. Caiden was starting to feel sleepy as she walked into his him. The pie had finally worn off and Caiden was quickly falling asleep. Cheryl tucked him and and kissed him goodnight.