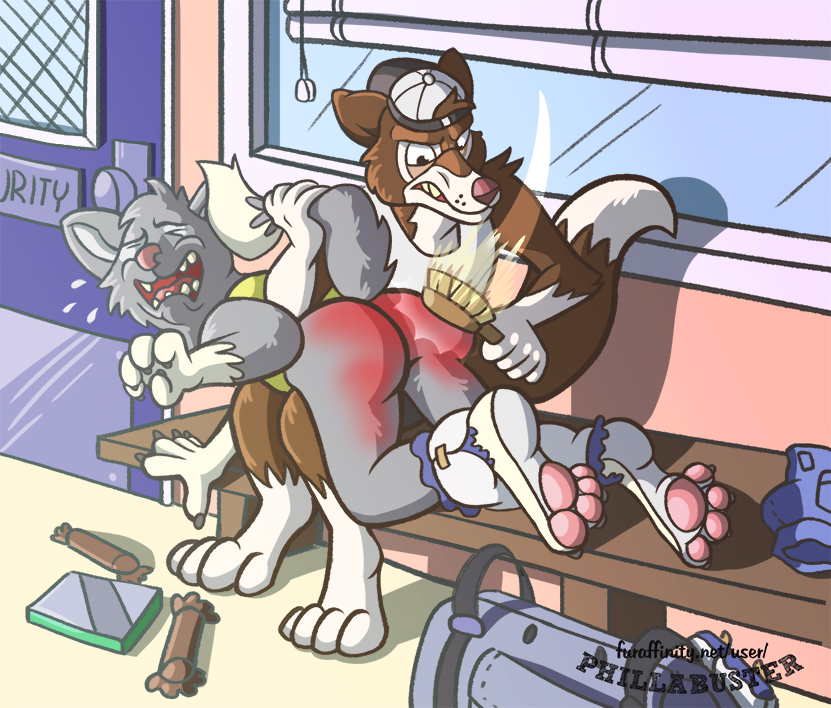 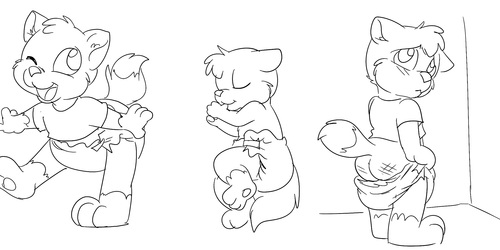 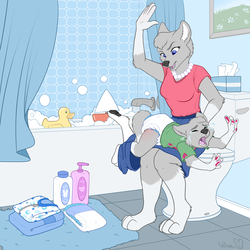 It was getting close to the end of Summer and Caiden had a long three day weekend ahead. Work had been pretty busy lately so he wanted to relax this weekend and cub out. He called up his friend Chris the Fox and they coordinated a playdate/sleepover at Caiden’s house. Chris was going to play the ‘big brother’ and Caiden was going to play the rambunctious ‘toddler’ for the weekend.

Chris came over on Saturday morning and the two started their weekend. Caiden ran amuck in his diaper around the house and Chris played along as his ‘older brother’. The two had a great time during the day and at night the two of them went Go-Carting and to see the new Bourne movie. Caiden of course put more clothes on, but still had to wear a diaper per Chris’ instructions. He didn’t want an accident while they were out. Chris also brought the diaper bag which was just a regular duffle bag. The two didn’t ageplay much in public as to not cause any awkwardness or embarrassment to each other. The night ended and the two headed back to Caiden’s house. When they arrived, Chris changed Caiden’s diaper, bathed him, and sent him to bed with no issues. It was a great start to the weekend.

The next day both of them woke up a little later because of how late they stayed out the night before. Chris changed Caiden’s diaper and they both started the day. After a bit the two wanted to have a snack but Caiden didn’t really have a lot of food in the house.

“We can goes and gets some snackies fwom da gas station!” suggested Caiden loudly

“Hmmm….That does sound good, but I’m a bit too tired still to take you down the street right now. How about in a couple hours?” said Chris as he plopped in the sofa.

“Aw c’mon big broter!....” whined Caiden as he dramatically laid on Chris, “I can goes and gets it. I’ll be super carefuls and wook both ways when crossin da stweet.”

“I don’t know….” Though Chris playfully as Caiden interrupted.

“Alright, alright. Fine.” Said Chris as he stood Caiden up and felt the front of his diaper and pulled on the back to see if he was clean, “OK, go and put some pants on and you can go. You can get ONE sweet for you and one for me as well. Got it?”

“OK chris! Yipee!” exclaimed Caiden as he ran upstairs and put some pants on.
Caiden left shortly after to go get the snacks.

Caiden headed down the street to the gas station that was a few blocks away. He arrived there and began to look around. He found the candy isle and grabbed a candy bar for himself and one for Chris.

‘Hmmm…maybe one or two more wouldn’t hurt…’ thought Caiden to himself as he grabbed a couple more, ‘I’ll just make sure to eat these later tonight’

Caiden browsed around a little more when he started to think that he needed to head back. Caiden reached down in his pocket only to find that he left his wallet on his nightstand.

‘Shit!’ thought Caiden to himself ‘I don’t want to walk all the way back just to get my wallet.’
He looked around to make sure no one was watching and shoved the candy in his pocket.

‘I’ll just leave a tip next time I come back.’ Thought Caiden as he made his way towards the door ‘Phew! Home free-‘

“Just what do you think you’re doing!” shouted the big bulldog owner as he grabbed Caiden by the scruff of the neck and pulled him back inside.

“The problem is I saw you steal those candy bars and try to walk out of here.” Said the bulldog owner.

“I-I was gonna pay you back next time. I swear!” said Caiden frantically as he was dragged towards the back office.

“I’m sure you were. We’ll see if that story holds up when the cops get here.” Said the owner sarcastically.

“No please sir! I’m sorry. Look, my friend is just a couple blocks down. He’ll come by and pay you whatever you need. Please don’t turn me in…” begged Caiden on the verge of tears.

“Sigh Fine! But you give me the number and I’ll call him. In the meantime you sit in my office and don’t even think about leaving.” Said the owner as Caiden gave him the number.

Caiden sat there while the Bulldog called Chris. Caiden couldn’t hear what was being said since the owner had left the office but it looked like Chris was coming. About 20 minutes later, Chris came by carrying the diaper bag and talked to the owner. Both looked really pissed but after a good while had past, Chris finally shaken his paw and headed towards the office where Caiden was at.

“Oh boy am I glad to see you.” Said Caiden as Chris came in and slammed the door.

“Stealing! Are you kidding me Caiden!? I know you’re playing a three year old this weekend but I didn’t actually think that you would go and do something so stupid!” shouted Chris as he lowered the blinds around the office.

“I’m sorry Chris. I forgot my wallet and didn’t want to go back...” explained Caiden

“Oh and you think that’s a good reason to steal?! I’m very disappointed in you Caiden. You could have called me or not been so lazy! Did you know you could have been arrested for that?” lectured Chris as he set the diaper bag on the ground.

“Yes I know that and I already said I’m sorry. Can we go home now….?” Asked Caiden

“Well I don’t think you’re sorry Caiden. You’re sure not acting like you are.” Said Chris as he impatiently tapped his foot.

“Sigh I was going to wait until we got home to do this, but clearly you need it now.” Said Chris as he took the furbrush out of the diaper bag, “Take off your pants and pull your diaper down young man, you’re getting your butt blistered.”

“Ah ah, I would do that Caiden.” Said Chris calmly, “I made a deal with the owner. I said that I would pay him after I taught you a lesson. I was going to wait to do this until we got back home to spank you but you leave me no choice. On top of that he expects an apology and then I’ll pay him. If you leave this room, he’ll call the cops. Do you want that?”

“Good, now take off your pants and come here!” said Chris sternly.
Caiden begrudgingly obeyed and took his pants off leaving him in only his diaper and shirt. He then made his way over to Chris.

“I hate to have to do this to you Caiden. You’re old enough to know better. I guess the good news is after this punishment you’ll never steal again.” Said Chris as he pulled Caiden’s diaper down to his ankles.

“C’mon Chris….Don’t spank me…” whimpered Caiden as Chris picked up the furbrush and raised it.

“You earned this young man.” Said Chris as he brought down the brush on Caiden’s bare behind.

“Stealing Caiden. Really? My 2 year old cousin know better than this. You should too!” lectured Chris while he continued to spank Caiden

“OH!OH!OH! OWWWIIEEE!!.....OKOK! I’ll never do it again!” whimpered Caiden as the swats were hurting more and more.

“Oh I know you won’t. If this ever, EVER, happens again I’ll come to the jail or wherever you’re at and tan your hide with the belt.” Continued Chris as he blistered the adult toddler’s butt

“WWHhhaaaa….OWOWOWOOWooowiiiwww…..!” cried Caiden as his butt was fire engine red now and he was squirming.

“You. Do. Not. Steal. Do. You. Understand. Me?” spanked Chris inbetween the words.

“YES!! WHHaaHHWahhaaHHAaA….” Bawled Caiden as he kicked his legs and beat his arms.

“Good. Now a few more to drive the point home!” said Chris as he finished up the spanking.

“Now go put your sorry behind in the corner and think about what you’ve done.” Said Chris as Caiden got up and did as he was told.

A few minutes passed and Caiden had downgraded from full on bawling to sniffling.

“OK Caiden. Pull your diaper up. It’s time to go.” Said Chris sternly as he put Caiden’s pants in the diaper bag.
Caiden was about to say something regarding his pants when Chris interrupted.

“No pants for you. Since you want to act like a little baby, you’re going to walk home like one. Now lets go.” Said chris as he grabbed Caiden’s paw and lead him out of the office.

They left the office and went into the store where there was a small crowd of people that heard the commotion and stuck around to see what was going on. Caiden, who was being led with one paw towards the cash register by Chris, was now crying again as he held his obviously spanked, diapered rear.

“Now do you have something to say Caiden?” said Chris as he pulled Caiden’s ear.

“Are you gonna do it again widdle baby butt…” teased the owner as he pulled on Caiden’s cheek.

“Good, then you two may go after payment.” Said the owner as Chris paid him.

“Let’s go Caiden.” Said Chris as he lead Caiden out the door by his paw.

“Bye bye little guy!” shouted the Bulldog as they left.

“When we get home you’re going straight to you’re room. No tv, no toys. You’re grounded for the rest of the day. We’re also going to have another conversation about your behavior before bed so you can look forward to that too. Understand?” lectured Chris as they walked down the street.

Caiden whimpered at the thought of what was to come. He’ll never steal again.