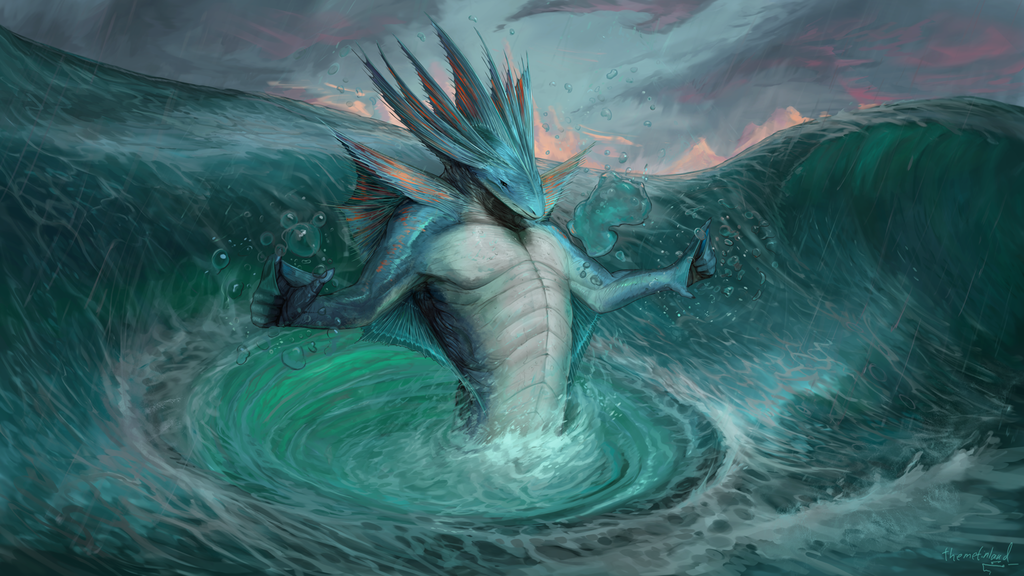 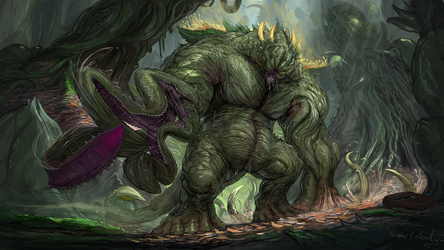 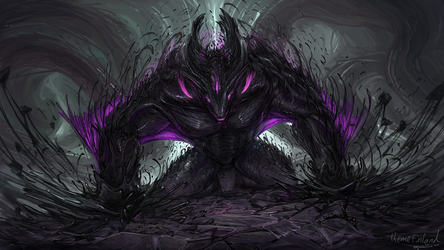 "Hidden between the turbulent waves, a figure is focused on their sculpture. Not an ordinary sculpture made of marble or clay, but of water. Indeed this figure is not a part of a species that would mine for such minerals and is at home beneath the waves. This time however, it has come above the surface to create something that its species calls art. A form of art so fleeting that it lasts for only as long as it has its concentration focused on it. The slight rain around it seems to halt when it comes close to the figure, bubbles of water rise up from the sea. These bubbles float around, split, merge and collide, slowly but surely conjoining together to form a shape. A strange shape to be sure, barely recognizable as anything, but as it evolves and more mass is added to it, details begin to appear. As crude as it may seem, the figure stays still and concentrates on its art. As it grows, smaller water bubbles are added to bring it some finer details. However, by the standards of terrestrial sculptors this sculpture wouldn't pass off even as a cheap work. The figure is not concerned by this, however, as for its kind, there are no standards as all of their art is impermanent, tied to the moment and unable to be seen outside of it. For them the environment, the waves around them, the sun gazing from the horizon, casting shadows to the clouds, themselves, are all a part of their sculpture. It is more like a performance to them, the act of creating it like child's play, having no other value than making its participant feel fulfilled.

Sometimes, these merfolk may gather together in small groups, each of them creating, performing, admiring one and anothers works until eventually they become no more than memories in their minds. Perhaps the memories are a part of the act too, as in their minds these sculptures evolve and change, details are added and forgotten, becoming the ideal shape, unique to each witness. Indeed, unlike in the cultures of the terrestrials, there is no skill or prestige gap and all of their kind engage in this form of art, enjoying the strengths and flaws in one and anothers works equally.

But for us this kind of art may seem quite sad. It is like creating something beautiful into the world, only to destroy it afterwards. But that is not the point for them, for them the transient nature of their art makes it more far more precious, as there is only a moment where they can enjoy it before it is gone forever.

As the the figure stares into the figure rotating in front of them they are still. Their breathing steady as their eyes stare at it for a long while. The bubbles fall from their suspended state, the sculpture disappearing into the waves. The figure stays still above the waves for a short moment before it dives back below the waves. Indeed, for them, nature can be shaped, but it refuses to change."