Amalgamate clean up suit by themefinland 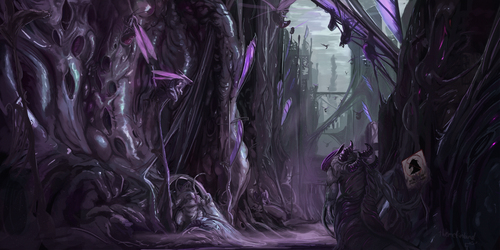 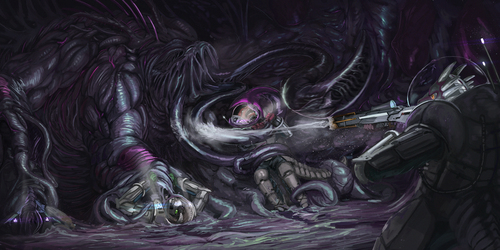 These suits, also known as "tin men", due to the claustrophobia they incite when the shield is down, are used by military personnel who are assigned in tasks concerning the small scale clean up of an amalgamate infestation. The suits are outfitted with a robotic frame that aids in movement. If the suits power goes out it is impossible to move due to its hefty weight, this caused the unfortunate demise of several users of this suit in its earlier phases where the battery was not as reliable in cold environments. The weapon is hardwired quite literally to the suit. The rifle uses either liquid nitrogen or napalm as its ammunition, this can be changed in most models, but some older variants of the suit have only one or the other. This weapon is used to clean up any residue of the amalgamate that is found.

Often the infected area is first cleaned either with drone strikes or chemicals after which these specialists are sent there to assess the damages and whether a deeper purging is required. If the amalgamate has managed to burrow itself deep underground explosives are often used to unearth it after which it is promptly incinerated if it manages to survive the explosion.

Sometimes however the amalgamate infestation may be underestimated, for example when these clean up specialists are sent to underground tunnels or caves where it may not be immediately clear how much of the amalgamate is left. In these sort of places the amalgamate may overwhelm the team. Those who have been in this field of work have probably seen once or twice these former specialists who now are now transformed into the amalgamate and can be seen wearing these suits of armor underneath the mass of amalgamate that has overgrown its host.