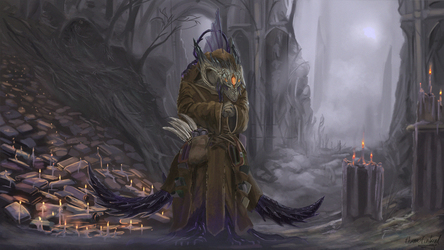 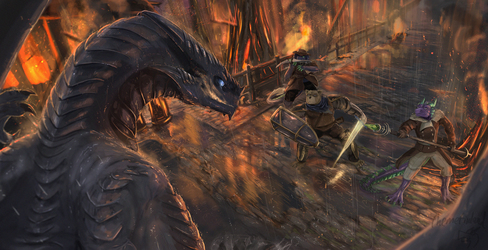 "...But as nature would have it wars are waged, civilizations are lost. In time only a distant memory would linger on about these grand mausoleums of old, their ancient purpose long forgotten. As time goes on many of the scriptures and texts contained within them are destroyed and trampled by invading forces. The world may however be better off with some of the books and scrolls gone, tomes without names and bearing no importance to many hold terrible tales that no one should lay their eyes upon. Unwanted memories tend to surface eventually however. Troops and farmers alike looted some of the scrolls and tomes from the burning mausoleums in the hopes of that some of them could be worth a coin or two to scholars and historians alike. This is how some of the more obscure and terrible texts came to resurface throughout the history, through curiosity merchants, selling all sorts of obscurities like mottled tomes written in unknown languages and trinkets forged in far away lands. Indeed, mystery and intrigue is what drives them, which is just what the They know every civilization has, which guarantees Them immortality.

Even in the modern times scraps of the ancient tomes remain, or recreations of said tomes. Many of them fake, but some genuine papers exist which demand high prices in the auction houses, high prices which many collectors are prepared to pay for the ability to peer into the depths of forgotten history. Of course the scripts are written in languages long lost, making them incomprehensible. However you do not need to study them for long until you begin to see some common themes in the chapters and you can piece together some sentences. It takes a curious mind to reveal the secrets behind the text, but as the meaning behind the text begins to reveal itself curiosity tends to shift to dread. Thankfully however, modern technology has brought us better ways to relay information than just through books and scriptures."