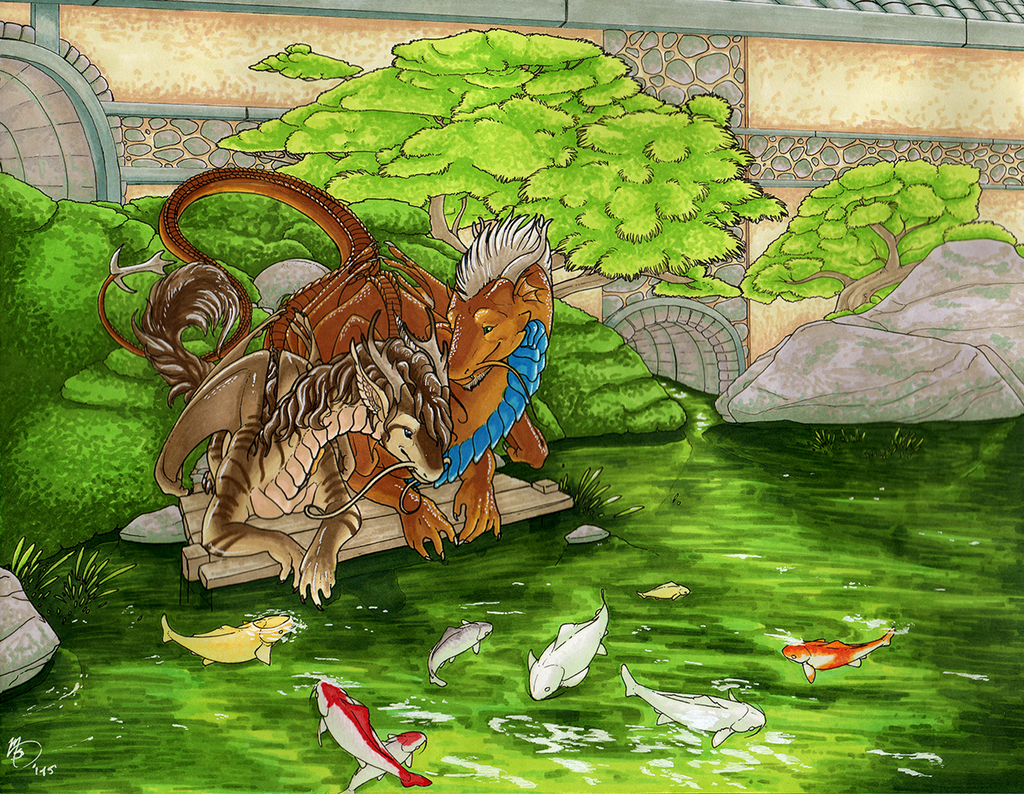 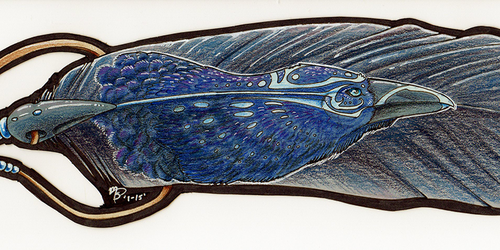 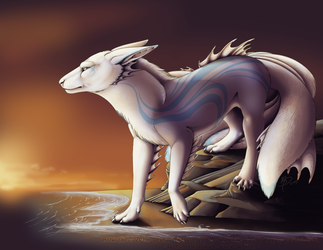 So.. Bit of a story behind the physical piece...

Last night I went to prepare for a stream to work on finishing this (I had the bush to the left of the couple, and the pond with the fish uncolored), and had leaned over to grab my marker roll to arrange on my lap for the duration of said stream. My headphones snagged on my water glass (which has a handle for easy grabbing), and tipped the nearly full cup all across the desk and fully on the paper.

As you can imagine I had a mental white panic moment and flung the paper onto the carpet on its face and frantically scrambled for paper towels to dry it off as fast as possible while a miniature waterfall cascaded off the desk behind me. Apparently cardstock is more water resistant than I figured, for the back side was still rather dry. Prismacolor was a boon as it did not once bleed or smudge, but the wet side of the paper pulled it into wacky curls that I had to fight with a hairdryer on both sides to get it to a workable state. The result of this is why there are some blurry areas as the paper was ever so slightly warped even under a heavy sketchbook on the scanner. I'm going to have to press-store this piece for some time to get it flat enough for mounting and laminating -__- How annoying!

Incident aside, I had a good deal of trepidation tackling water on such a large-space of uninterrupted canvas. Normally with marker pieces I try to fill in the paper to minimize large areas of negative space for the nature of how the markers behaved. Thankfully five colors later it blended really well despite the fact the texture of the paper drastically changed from its original state. At the time of completion I wasn't convinced I did a decent job with the water until I saw the scan today and noticed effects I didn't see prior. So it turned out well despite the hiccup, and after many heavily referenced photos to get color palettes and architectural styles right.

This piece was requested by Nakase on DA of her and her mate's characters at a Japanese Water garden. At the time this was a contest prize well before she's had her child, hence why there is no little one with them. ^_^;

I did something a lot different than the bookmark piece in that this was done almost entirely with Prismacolor markers down to the blending, and a touch of gel pen for the water and highlights. The fish do appear vivid here (they did in the photos I've seen too), but they are tinted in the physical image.