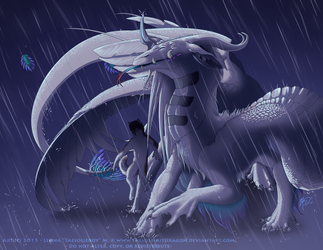 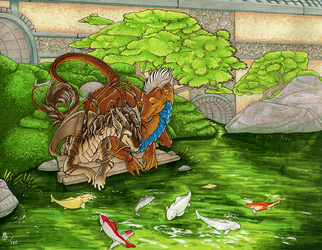 I... Don't remember the last time I took on a traditional commission piece... ._.

This piece was requested by TornFeathers on DA (Mazz on FA) for a bookmark featuring a raven on a feather. I've always fancied the idea of the painted feathers I've seen some folks do, but this was a completely different approach to it that I don't think I've seen done. I did remember that ravens weren't truly black, but have this gorgeous blue-violet sheen to them under the right lighting, and wanted to portray that with this piece.

The other thing I really experimented with was doing a base layer in light-colored markers, and then tone the rest of it with pencils. The effect is certainly interesting, but I clearly need more practice in feathers with this medium style. o_o;

Done with Prismacolor markers and colored pencils on cardstock paper. Size wise some who watched the stream progress of this suggested it's close to textbook size, which is apparently a size bookmarks can be found in oddly enough. I'm used to seeing the little three and four inch strips, not this six inch monster!
... And I think I made a few stream watchers nervous when I pulled out my X-acto blade to cut the bookmark out...

I'll be laminating it to seal the pencils and make it more durable to use before shipping out.