Stay With Me by Taesolieroy 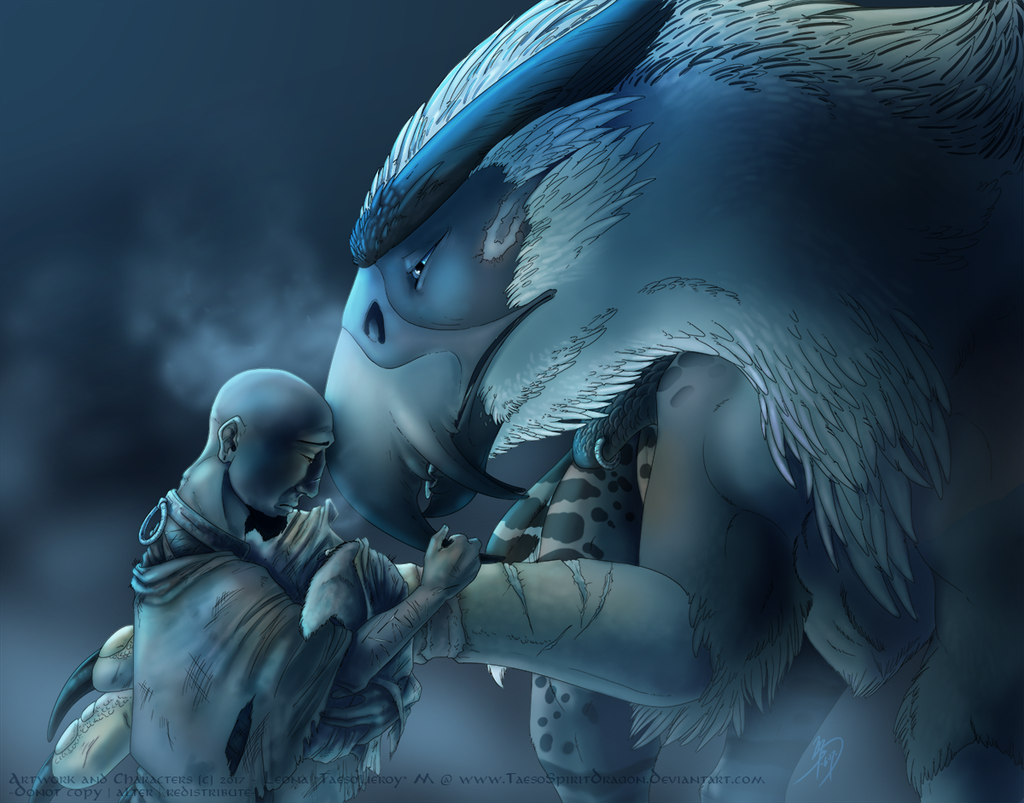 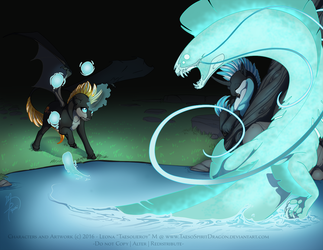 I was feeling in a really low funk remembering my lost companion animals, and needed to a) draw something to pour that pain into, and b) keep some of my technical skills from rusting with all that's been going on. So, I drew this piece between two characters of mine that I've developed in a forum rp known as TaleWind as a companion to the post I wrote introducing the two (well three if you count the little chick).

As a size reference, the recently escaped slave is smaller than the average male at around 4'3", while the massive prehistoric gryphon, Bah'Kerata (Kera), stands at 5' to the shoulder.

I've also been working on roughing up my characters age/wear/tear wise based on their lifestyle, as I feel it adds more to the visual story than any personality description could cover.

For those who like to listen to musical numbers while reading the post below, here is a beautiful piece from 'Ori and the Blind Forest' that fits rather well to the mood -

Her breath wafted out in thick clouds as her throat clenched to his words. The hand resting against her massive shoulder trembled before clenching as grey eyes turned to him in the night, wicked curves of a sizeable beak swinging near the human's head in the process. He didn't flinch from them, staring out into the borders of the dark forest across the field that lay between it and the building who's shadow they hid in. In his other arm he securely held a bundled form that one could have mistaken for a swaddled child if it weren't for his slave attire, and the tufts of down poking from between the folds. He lowered his hand to readjust over the silent chick he was entrusted to carry in their flight through the city.

The cold stone bit into her feet, so unaccustomed to feeling little else than hay, wood, and the cursed canvas that bound her talons from harming her handlers. The wind was harsher still against her thin frame and bare flesh rubbed raw from years of cruel metal reminding her of her status as little more than a thing to be owned, used, and abused at the humor of the creatures that held her chains in their clawless hands.

Until now. She was here, inches from a taste of freedom thanks to a human she thought didn't exist several months prior. It was his recognition of who she was, and who saw her pain, saw her desperation for her only child's survival. She could have struck him down easily now. She wanted to back then when he first arrived at the keep, just lash out with a leg and crush his spindly spider-frame, to throw him against the wall when he came and touched her then gravid flank.

But now, she saw to him as a lost ship to a beacon guiding it from treacherous shoals. He had become her world, and now he was leaving it. Her beak opened slightly, hushed words emanating from a raspy throat as her head lowered to his level.

"Stay with me… Please… You know this world. You don't belong back there any more than you saw I did.." His dark-skinned hand reached up to wrap around the nearest tine of her beak in a familiar tug that came to be like their secret embrace as she spoke, the deadly tool hardly moving out of learned habit with the muzzle previously adorning it, "She looks to you as her sire.." A thin cree escaped her chest as she looked pleadingly into his eyes, "Do it for her? I can protect us both."

A wry smile lit his cheek as his brow touched the smooth bone arcing away above him, "I know you would. But someone needs to keep your trail clear. Those guards ought to be waking soon from their little nap. Besides…" the smile disappeared into a nervous furrow, "The forest is not safe for humans.. It's cursed land for us, but, you would be able to disappear into it easily. Not even a dire would consider you easy pickings."

"They wouldn't target you either if I'm near you." She pressed, shifting a foreleg to almost curl possessively around him, drawing a chuckle from the man.

"Probably not, but, that place is not one for me… I'm sorry. I did hear talk of wild gryphons out there, smart ones. They think for themselves, and keep their own society, maybe they can take you in." He slid his hand to the soft feathers under her jaw, where the skin was sensitive, to give the nervous giant something to lean into with her head. She closed her eyes in defeat of her attempts to turn his mind.

"When you go into the woods, try to find a place to bunk down by next sundown. I heard word that there is a bad storm coming in from the mountains when I was in the market earlier."

"South. Try to find my way back to my tribe. It's far too cold here for a someone like me." His head lifted in thought, "Speaking of.. You still need a name. What I hear of the wild ones, they bear their own names."

"Something like that, but not butchered like my former master did with mine." He walked around to face her from the front, taking her in as his arm returned to holding the sleeping chick in a gentle embrace, "Now, what to call you…" He hummed in thought as he looked over his shoulder to the forest, and the mountains dark in the horizon, "Bah'Kerata.." He looked back to the gryphoness as her tufts perked in the breeze curiously, "In my tribe's language it means Running Wind. To signify that you were born without great wings, because your feet will carry you just as swiftly wherever fate leads you." The name seemed to purr off his tongue in the language she had enjoyed listening to in the darkness of the cell when it was just the two of them, and her eyes closed at the sounds, throat still clenching at the finality of this moment.

"Bah'Kerata." She leaned down again to press her beak against his chest. It felt right to do that, as if ceremonial. Her eyelids flickered open after a moment to look down at her bundled chick, "And her? I would be honored if she was given a name by you, so you could remain part of her life wherever she goes." Kera watched expectantly as he reached a hand to gently caress the downy fuzz inside the fabric, causing the young gryphon to shift in a small stretch, tiny wing poking up before she settled in her slumber. He gently caressed the delicate limb with his palm and thumb, before securing it back into the encompassing warmth.

"Normally my tribe doesn't name our babes until they see their first year, but I think she deserves it." He gazed down at the bundle for a few moments before looking up at the newly named mother.

"Zazzeri" Little Dawn. The name seemed to hang in the air between them, before settling as if the sky was witnessing the birth of their identities, sending a shiver up her spine as she knew the words from their nights of his teachings.

She couldn't respond however, as his eyes snapped behind her when the sound of a door slammed a few streets away in the sleeping city. The man held up the bundle to Kera, panic beginning to fill his gaze.

"You must go, now, before someone sees you." He backed away a few steps after she gingerly scooped her chick into the crook formed by her three tines, then moved in under her head to swiftly embrace her neck. Not an easy feat with her shoulders standing above him, "Run far, and keep safe, Bah'Kerata." He reluctantly stood aside as she took the first few hesitant steps towards the field, looking over her shoulder towards his figure as he disappeared into the city.

Her muscles ached at stretching for the first time as she crossed the fields in ground-eating bounds, but her aching heart spurred her to keep going. She had a promise to keep, a cub to protect from the grasps of the humans who would call themselves her masters. It didn't keep a thin wail from lifting into the night as she forced distance between the one creature she could consider part of her family.

The red dawn of her first day in the depths of the woods had little meaning to her than the beginning of her fight to survive. She wandered aimlessly, trying to keep the city to her back as hunger began to chew at the edges of her consciousness, and the chick stirred with the briefest of pips for food before falling silent at the change of air, curling tighter against the cold.

A flash of movement, white on white, erupted from the underbrush, causing the great gryphon to jolt in shock before spotting the white bobtail of a rabbit disappearing into the underbrush. Haunting bellows and thin shrieks echoed in the air, setting her heart in a panic to move away from the direction she came from.

She had to protect her chick.

Through the day she found her footing treacherous, as fallen trees crumpled beneath her weight, or the ice of a hidden brook caved, sending her toppling to her elbows as she fought to keep her head and its cargo off the ground. Her muscles screamed to stop, but she kept pushing on. One step, and again. Keep moving forward.

When the wind began to kick up she merely lowered her head against it, but she could not ignore the wet patches falling from the sky. They bit into her where they melted through feather and fur, soon gathering on the sullen rings bound in her wings and sending ice straight to the bone. She had to stop, the fabric protecting her chick was starting to get soaked through. Turning her head side to side in search of a place, she found an ancient cedar with a sweeping base forming a deep pit near its trunk where it grew against a rocky ledge.

Twigs and bits of needle fell onto her back as she poked her head in for a better look. She would be able to just squeeze if she pressed up against the rock in a tight curl. It took a few moments to shuffle awkwardly into place, but she was soon able to set her chick in the hollow of her arms, fanning her feathers out to trap what little body heat she can to keep Zazzeri warm. Thin mewls of hunger wafted from the folds as cold realization struck her aching stomach. For all their planning, they had not accounted for food Kera could carry in her crop for the chick. She would need to find something when the storm ended.

She lowered her great head to curl over her offspring, murmuring softly, "I know little one, but we need to wait a little longer. I'll find us something when the sky clears.." Her eyes looked up at the branches sweeping above her in the growing howls of the storm. She was out of the clutches of the humans in her first taste of freedom, but she was now once again penned in a cage by nature, forced to wait out its wrath.

Drawn and inked with crow quill, and digitally rendered in CS6