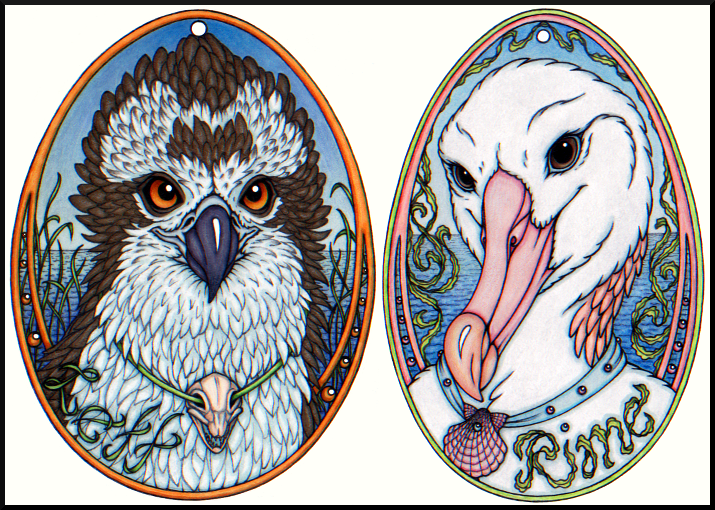 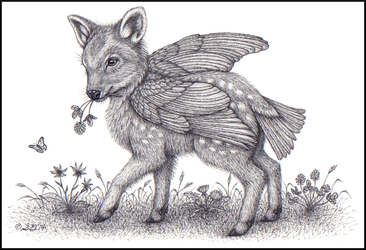 Since hubby and I are having suits made of our two bird chars, I wanted to make badges for them. He's had an osprey char ever since I met him: http://swandog.deviantart.com/art/Swandog-and-Sayh-6391685 and it was named "Sayh", but then Panduck took over that name, so he decided to rename his osprey to "Lett" (which means simple, easy or lightweight in Norwegian, and he is just a simple osprey, albeit a very silly one). :) When he saw the necklace I put on my badge, he wanted a necklace too, so I gave him a fish head (he loves trout). :D His badge (and name) is decorated with lakeside rushes, and shaped like an osprey's egg. :)

"Rime", on the other wing, is my new wandering (aka snowy) albatross char, whose name means "hoarfrost" in English and Norwegian, and also "rhyme" in Norwegian, and alludes to the "Rime of the Ancient Mariner" poem. I've loved albatrosses for as long as I've loved swans (even wrote a poem about them, years ago: http://swandog.deviantart.com/art/The-Albatross-6535814 and have an albatross ring that I got from my grandmother back in the 90's and have never taken it off), so I felt it was about time I actually made a char of one. :) Rime loves and collects seashells, and has a scallop shell and pearl necklace on a velvet ribbon. Her markings and coloration are those of a male, because I didn't realize when I created her that only males have the peach neck patch, and overall whiter plumage. But peach is my fave color, and besides, she's a tomboy, so I kept it. :D Her badge (and name) is decorated with seaweed, and shaped like an albatross' egg. :) Both badges are shown actual size.

Anyway, I want to do more "eggburd badges" like these, since they were so fun to do, and may even take a few commissions for them (we'll see), but only of bird chars. (Feel free to note me if interested, though!) :)