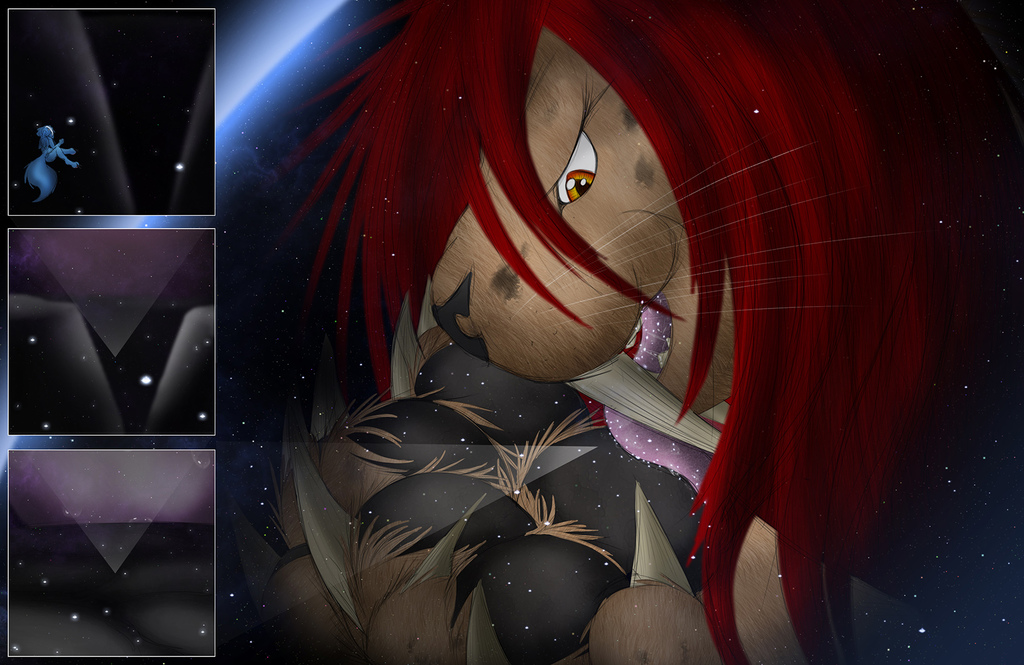 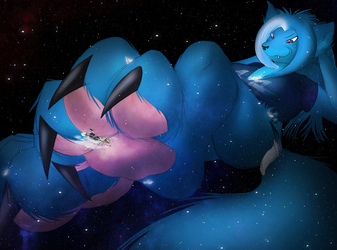 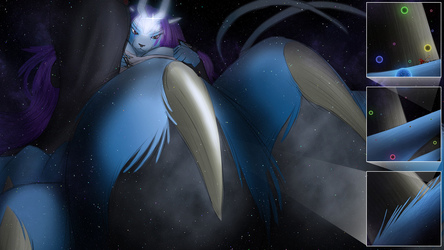 "I've got to say, this has definitely been the best idea I've ever had. And that's saying something! I should've done this ages ago. Just imagine how big I'd be now! Oh, but what am I saying? You're just tiny little mere Gods, you can barely even imagine me now! Ah well, I'll just have to ignore you like the dust you are and begin my rightful rule as the biggest, strongest, and growiest all-powerful being to ever exist. And if any of you pathetic specks want to dream of not worshiping me as your supreme master, or even of trying to object? Heh heh heh…" She licked her lips with a wicked sneer. "Well, let's just say a growing girl's got... to… eat…?"

Vinca shook herself, scattering clouds of universes and pantheons across her vibrant blue coat. Bits and scraps of shattered divine architecture tumbled from between her breasts and her toes, drifting off into the endless void of empty space around her… No, that wasn't right, was it? She could see things. What were they? It was nearly impossible to make them out against the darkness, but they were there for sure- even if she could barely see them, she could very well feel them.

"Who… Who's there? If you think you can intimidate Vinca, you're in for a heck of a shock, you snack-to-be!" With a smug and haughty snort (one whose exhaled breath shredded and ripped apart entire clouds of divine realms instantly), Vinca guzzled all the size she could swallow from her helpless brother, to the point that she started to feel dizzy as a choking-like sensation overwhelmed her. This sensation only magnified when she realized that the whatever-it-was she'd been seeing wasn't any closer. Actually, no, it was getting further. It was…

But no answer came. With a silent shiver of dread, Vinca watched the distant things entirely outstrip her growth, vanishing back into the dark and leaving her entirely alone with herself; too big to mock and lord over even the gods, yet too small to know what this unseen horror could be.

Vinca slowly wrapped her arms around her bust, curling up a bit. She was starting to feel a lot like her brother…

There was a distant, rising rumble. It was impossible to notice until it was already deafening, a quaking bass so low and penetrating that it seemed like part of the world itself- or it would have, if there were any world to be part of. Every instant amplified the sound and force far beyond godlike, transforming and reshaping all in its path. It took an eternal instant for the source to appear, but when it did, it was overwhelming: a surface, a wall, an infinite plane of warm wet pink, inexorably pushing forward, consuming all and leaving nothing behind. The few who could see more than the tiniest fraction were helpless to watch its approach.

More were trapped. It wasn't the best, but it was working, and not much else was, lately. She was just glad these things were so sticky, as if some weird force was pulling things in to her as she grew. Of course, having them stuck all over her fur and paws was annoying, but not much of a real bother. Fang's tongue was more than sticky enough to lap them all up.

Another long, wet, slurp; another hungry swallow. Fang couldn't taste anything specific, but there was a tiny mishmash of flavors, like when she ate an entire tribe of various species all at once. Perhaps that was what she was doing now? Eating an entire tribe of glowy light things? No, that couldn't be right- she'd seen other smaller foods trying (and failing) to flee these lights back when she was small enough to only fit a few dozen in her mouth at once. It didn't really matter, anyway. Fang wasn't really the philosophical type. She hungered, therefore she ate. That was the only true rule for Fang. The only one she needed, and the only one the rest of creation needed to beware.

Another delicious devouring began, Fang's huge pink tongue sliding along her thick beastly paw and sweeping up lights in its salivary embrace. A thin slick trail of drool remained behind, helping any further food stay in its proper place until she could deal with it. Until then, they would remain pinned in an infinite flood, unable to see or sense anything except an endless black wall beneath them. When the time came, they would be dragged across between pad and pink, treated to a quick and final trip between two rows of staggering white pillars with grand columns dwarfing the limits of their comprehension, and then utter darkness and an unending fall through the abyss.

The Smilodon Fatalis Thea greedily started her next meal the very instant her prior one was finished. After all, she was still hungry. Still ravenous. Still expanding. And, well, a growing girl's got to eat.

So if Fang grows by eating, and she grows eats enough to grow big enough to eat everything on her planet... in her solar system... in her galaxy and so forth? What happens? Well she eats more stuff and grows more naturally!

Vinca might really want to consider staying out of the way there!

But wait.. what's that blue edge there?